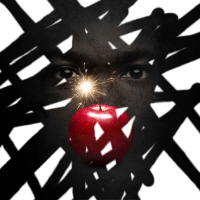 What starts as a look at modern-day paranoia around terrorism turns into a sometimes sinister drama about communication and how well we know our own families in JC Lee's Luce. Liberal American couple Amy (Mel Giedroyc) and Peter (Nigel Whitmey) adopted an orphaned seven-year-old boy from an unnamed, war-torn African country. Many of the kids adopted in the scheme were traumatised and had major behavioural problems, but Amy and Peter were lucky - Luce (Martins Imhangbe,) now 17, has been a model son and his school's star pupil. But when one of his teachers, Harriet (Natasha Gordon,) sets her class an essay that asks them to "think outside the box" and imagine themselves as a historical figure at a significant moment, she's disturbed when Luce chooses an obscure 1970s terrorist. She searches his locker and finds dangerous, illegal fireworks, but as Luce has an otherwise unblemished record she doesn't inform the police, instead inviting Amy to discuss what she's discovered.

Unsurprisingly, Amy has no time for the suggestion that her son is a terrorist sympathiser, or even planning something himself, but while she and Peter confront Luce about the fireworks, they're reluctant to bring up the essay that started it all. 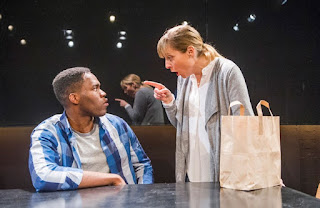 Apart from a couple of touches that feel a bit old hat (Dick Bird's set dominated by a mirror reflecting the audience; the actors sitting in the audience between scenes,) Simon Dormandy's production is slick and rarely puts a foot wrong, despite the many subjects Lee's play tackles: How much of a right to privacy a high school student can expect, the pressure on a teenager whose success so far means he's expected to be an example to others, the dark side of teenage sexuality and the gaps in communication in even the most well-meaning families, are among the topics that come in for some serious review. 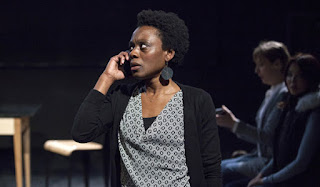 Where this could have been muddled, Luce uses it to its advantage because the sense of confusion adds to the feel of a thriller, as we're never quite in step with what Luce is really thinking, and the worry that maybe his essay wasn't so hypothetical after all is always hanging over the play. The only area where I found the vagueness frustrating was in the character of Harriet, who I couldn't quite get a handle on. But despite being physically imposing, Imhangbe doesn't rely on this to create menace, instead creating a few genuinely chilling moments as Luce is an expert at statements that may or may not be completely innocent, or thinly veiled threats. There's a particularly cruel moment near the end where it looks like he's going to prove his innocence to his mother, only to pull the rug out from under her. 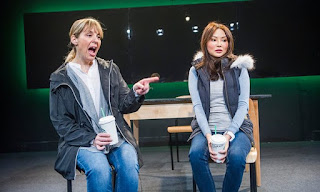 Along with Imhangbe it's Giedroyc who has to carry most of the play, and what looked like risky casting pays off: There's a lot of humour in Luce, and having a well-loved comic actress anchor it helps bring us into the world of the characters, but she's also strong as the fiercely protective mother in the play's darker scenes. Mention also has to go to Elizabeth Tan, who only has one scene as Luce's ex-girlfriend Stephanie, but in that time manages to run the gamut from dippy teenage girl to revealing a great deal of depth to the character. Overall, a very effective family drama and thriller that keeps you on your toes with its ambiguity.

Luce by JC Lee is booking until the 2nd of April at Southwark Playhouse's Little Theatre.