Branden Jacobs-Jenkins is an African-American playwright who got tired of everyone assuuming that his plays, regardless of their actual subject, must all be a metaphor for the black American experience. So, when looking for a subject to write about to cheer him up from a fit of depression he embraced this instead, adapting a play that confronted slavery head-on, and even has a title now considered offensive: 19th century Irish playwright Dion Boucicault's The Octoroon. This, at least, is the origin of the darkly comic new version of the play as described by an author-substitute in the prologue: BJJ (Ken Nwosu) tells us his An Octoroon got derailed when he couldn't find white actors to play the unrepentant racist slave-owners, and this is where things get creative as the races get well-and-truly muddled up in a show featuring blackface, whiteface and even redface*.

BJJ paints his face white to play both the virtuous plantation owner George, who's fallen in love with the one-eighth black Zoe (Iola Evans,) and hopes to marry her; and his villainous neigbour M’Closky, who wants Zoe too and is willing to do whatever it takes to buy her. 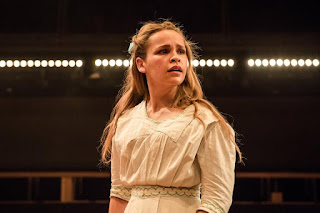 With the plantation failing and George considering giving up on Zoe to save it by marrying the wealthy Dora (Celeste Dodwell,) melodrama is certainly the right word: Boucicault's comedies occasionally get revived (London Assurance was a hit at the National a few years ago) but TV soap operas pretty much cover any appetite for this sort of thing nowadays, so it's no surprise the original doesn't get dusted off very often. But Jacobs-Jenkins' treatment isn't about the story so much as how it's told, and that's in a riotous mix of frenetic styles that sees Boucicault (Kevin Trainor) join his adaptor onstage to paint his face red as a Native American (and later, in a great gag, a white man with sunburn,) and Alistair Toovey in blackface as an Uncle Tom-like old slave as well as a younger one who scampers up the walls, surprising the audience in the circle (Toovey's very limber, if this information is of interest to anyone.) 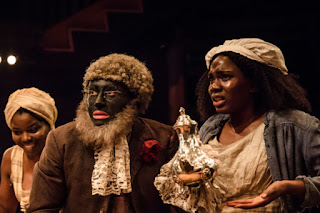 There's also a tap-dancing Br'er Rabbit, and Ned Bennett's production is full of bells and whistles (sometimes literally,) with blackouts and lighting effects breaking the action up at surprising moments, as well as a pile of tiny polystyrene balls that turn out to be surprisingly good scene-stealers. The tonal shifts are also bold enough to stop everything entirely for a huge change to Georgia Lowe's set, which sets the scene for a fourth act which BJJ and Boucicault describe as it was too epic to stage - the inventiveness with which it's created instead more than makes up for any lack of spectacle, capping a great performance by Nwosu who by now is playing two characters at once and enthusiastically fighting himself. 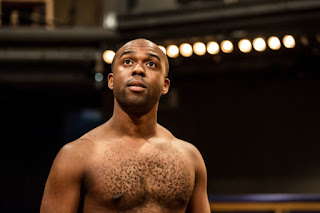 In all the race-swapping the only characters who get to be played by their own race are the female slaves (Cassie Clare, Emmanuella Cole and Vivian Oparah.) Although I don't know Boucicault's original I suspect Jacobs-Jenkins has built up their roles, giving a voice - and the last word - to the most helpless characters in the story. At times things get incredibly dark, to the point of possibly requiring a trigger warning‡, but for the most part this is a carnival of amiable madness that not only deals with a racial identity crisis from a modern perspective, but also despite what it does to Boucicault's story has a respect for it as well - making us try to see the balance between a story full of stereotypes whose hero may treat the human beings he owns well, but in the end still owns human beings; and the genuinely progressive element of an 1859 play that demands whites be punished for their crimes to the same standard as everyone else.

An Octoroon by Branden Jacobs-Jenkins, based on The Octoroon by Dion Boucicault, is booking until the 24th of June at the Orange Tree Theatre.

*no yellowface, but theatre still seems to be managing that without the layer of irony

‡trigger warning: Photo of a real lynching.
Posted by nick730 at 18:32