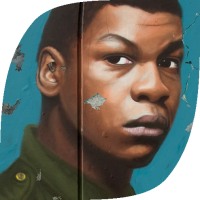 When the Old Vic announced that Jack Thorne would be writing an adaptation of Woyzeck and John Boyega would star I did wonder if the combination of a Harry Potter writer and a Star Wars actor would draw an audience unprepared for a play people have famously struggled to get to the bottom of for over a century. As it turns out I really hope there aren't too many kids being taken along as they'll have come away from the evening with a whole new vocabulary. Georg Büchner's play was unfinished when the playwright died in 1837, so all versions have always taken a bit of leeway in filling in the gaps. Thorne's version moves the action to 1980s West Berlin, where Boyega plays Frank Woyzeck, part of the British army presence patrolling the Berlin Wall. It's a job both stressful and dull, and those stationed there are thought of as inferior to those in the thick of it in Northern Ireland.

In fact Woyzeck was stationed in Belfast, where an event we never quite find out about traumatised him, and he's considered to have disgraced himself in the way he reacted to it, so has few friends left apart from Andrews (Ben Batt,) the only soldier who'll agree to patrol with him. 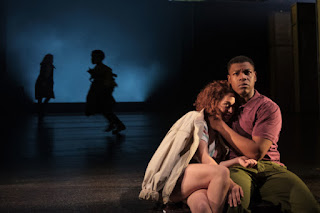 Frank has a girlfriend he brought with him from Belfast, Marie (Sarah Greene,) along with their child, and because they aren't married they can't stay in couples' quarters at the barracks. All they can afford is a stinking flat above an abbatoir, and in Woyzeck's desperate attempts to get more money he signs up to be a guinea pig for the sinister Doctor Martens' (Darrell D'Silva) experiments. 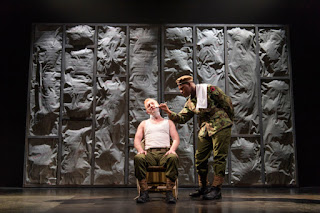 Joe Murphy's production gives this famous piece of German Expressionism a comparatively naturalistic first half to lull you into a false sense of security, as the indignities pile on Woyzeck gradually, his commanding officer Captain Thompson (Steffan Rhodri) treating him as a sort of pet and patting himself on the back for tolerating someone disgraced - while making sure to avoid any opportunity to actually help him. Thompson's wife Maggie is having an affair with Andrews, and the second act opens with a scene that'd really have the kids asking questions, as the two have noisy sex, while she demands that he call her a cunt, before Batt gets a lengthy (in both senses)
FULL-FRONTAL MALE NUDITY ALERT! 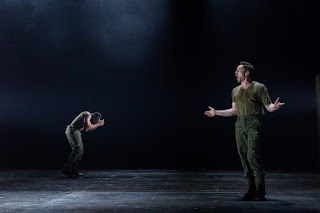 Nancy Carroll plays Maggie with a scene-stealing, note-perfect balance between the snobby officer's wife she is in public, and the self-loathing sex kitten she's hiding underneath; she also provides the voice of Woyceck's mother in flashback, and at one point in the depth of his madness alternates between the two, bringing home the Oedipal element in his mental breakdown that Thorne has added to the story. And there is a lot of Thorne in this, with even what is probably the most famous part of the play - Woyzeck being made to live on a diet of peas by the doctor - cut, as now this is a straightforward medical trial, a daily dose of experimental pills what sends Frank over the edge. 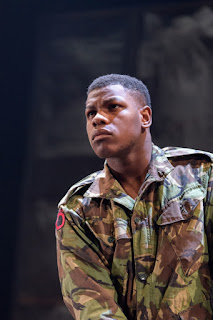 It does perhaps eliminate some of the element of Woyzeck being destroyed on pure whim - the drug is a growth hormone, and there's no reason to think Martens doesn't have some actual use for it in mind - but Thorne's streamlining does impose some clarity on a piece that's not known for its accessibility. And Murphy's production does build and maintain a horrible, oppressive menace, helped by Tom Scutt's design: Rows of monoliths that suggest the Berlin Wall crowd onto the bare stage and move around, being lifted up and down to surround the characters, and when smashed into they reveal blood and guts that add to the madness crowding in. This is the kind of programming decision that could have worked out as daring or foolish, but has firmly come out on the former side: Boyega proving intense and charismatic, and the production reinventing one of the bleakest, weirdest classics.

Woyzeck by Georg Büchner in a version by Jack Thorne is booking until the 24th of June at the Old Vic.