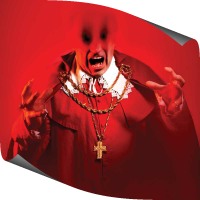 It may be a Troupe production at Southwark Playhouse's smaller space but the Royal Shakespeare Company's fingerprints are all over The Cardinal: The director and many of the cast are RSC regulars, there's a feeling the text has been thoroughly investigated, the programme features both articles from academics and a misleading running time, and there's even a dance break, as was de rigeur during the Michael Boyd years. The fact that James Shirley's play has even seen the light of day again can be traced back to the RSC as well, as it made the final four a couple of years ago when they were looking for an obscurity for the Swan. It lost out to Love's Sacrifice but director Justin Audibert clearly thought it was a shame for it not to reach an audience. On this evidence I would have to agree, it's got its problems, especially in the second half, but has a lot to recommend it as well.

The setting is Navarre, but far from the laddish bantz of Love's Labour's Lost, this time it's Stephen Boxer's manipulative titular Cardinal whose word the King (Ashley Cook) listens to. 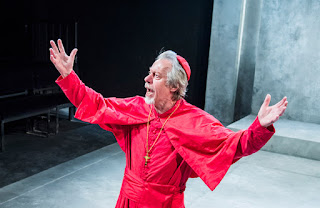 Keen to get advancement for his own family, the Cardinal has recommended his nephew Columbo (Jay Saighal) as a match for a wealthy Duchess, and the King has agreed. But Rosaura (Natalie Simpson) has ideas of her own. While Columbo is away at war she sends him a letter tricking him into releasing her from her engagement, thinking it's a test of his love. Instead Rosaura takes the opportunity to marry the Count D'Alvarez (Marcus Griffiths,) whom Columbo quickly kills in retaliation for being fooled. Rosaura now employs Columbo's enemy Hernando (Phil Cheadle) to help her get revenge on him and his uncle. 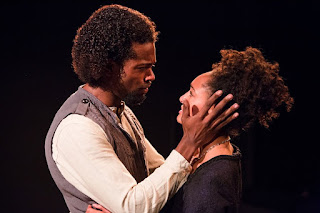 The Cardinal is a Caroline play - one of the last to premiere before Cromwell closed the playhouses - and carries echoes of the better-known Elizabethan and Jacobean revenge tragedies that came before it, from Webster and Kyd's creative poisonings to the Duchess' feigned-or-is-it-real madness carrying echoes of Hamlet's. But it also plays around with the archetypes of the genre, and isn't quick to divide them up into good guys and bad guys - Rosaura is a likeable heroine who takes matters into her own hands when women's position in her society means she isn't given her choice of husband; but she also defaults straight to tricking people before actually telling anyone what she wants. And Saighal's Columbo is a hothead but an appealing one, and his defiant speech after killing his rival struck me as the kind that other plays frequently give their heroes. 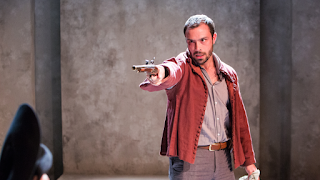 In period costumes that wouldn't be out of place in either the Swan or the Swanamaker, this isn't a particularly high-concept production - I liked Anna Reid's simple yet ominous set design but the thrust is another hint at where it was originally expected to end up - and perhaps a bit more edge would have been welcome - Audibert is after all a director who managed to find a way for The Jew of Malta to work in the 21st century. But the first act in particular rockets along pleasingly as events take their course and build to bloodshed. It's a bit more of an uphill battle after the interval as the story tangles up, taking a while to get anywhere. Timothy Speyer does his best with a comic relief character who's not actually given anything particularly funny to do, and while Shirley's text acknowledges that Hernando is a windbag, that doesn't really change that fact. 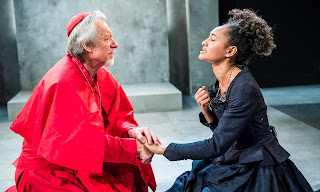 It's worth the stumbles for one of the better Early Modern likeably bonkers endings I've seen for a long while, as Boxer's so-far understated villain goes all-out in a would-be Machiavellian twist that backfires spectacularly, and which is quite rightly played for laughs. Sadly without the RSC branding and budget this doesn't seem to have attracted as much of an audience so far - maybe word of mouth will help. I hope so because while Shakespeare and a couple of choice Jacobean playwrights' works get revived (too) regularly, there's clearly a wealth of other surviving texts that currently get, at best, a zero-budget production somewhere like the Rose Bankside; having more of our better creatives get stuck into mid-size productions of them like this could yield some interesting results if the appetite for them's there.

The Cardinal by James Shirley is booking until the 27th of May at Southwark Playhouse's Little Theatre.