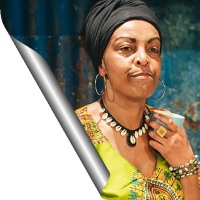 It must surely be time for Ellen McDougall to announce her first shows as Artistic Director of the Gate, and if there's one thing I hope she carries on from her predecessor's run - apart from the overall quality, but you'd hope she's aiming for that anyway - it's the short and snappy running times. After the epic run of last night's show I was looking forward to something more concise, and Christopher Haydon's final piece of programming provides it. Kalungi Ssebandeke's debut play Assata Taught Me is short, sharp and sometimes even sweet, imagining what life might be like as one of the world's most-wanted women. Assata Shakur was a high-profile Black Panther, imprisoned for killing a policeman; she escaped and fled to Cuba where she's been ever since, but she remains on the FBI's Most Wanted list, with a $2 million bounty on her head. So, at least as Ssebandeke imagines her, she's free but always has to stay on the alert.

The play begins during Barack Obama's historic 2016 visit to Cuba, so Assata (Adjoa Andoh) is even more on-edge than usual, triple-locking her doors and windows and aiming a gun at the door if anyone knocks. 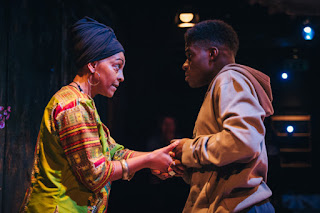 Even so, when she sees Fanuco (Kenneth Omole) being beaten up in the street she intervenes, bringing him home to treat his wounds, and when he asks her to be his English teacher she agrees: He's planning to move to the US and send money home to his family, and wants her to coach him so that he can make a success of it; but Assata's instinct to empower other black people has never left her, and especially when she finds out he's happy to be nicknamed "Blackie" by his friends, decides to make him understand his history and identity, and be able to stand up for himself.

The play does go to some dark places but it's mostly about the relationship between the two. Andoh is an actor I've liked for a while and she delivers a simmering power that often bursts out into real fury when Fanuco refuses to see the harsh truths she's trying to show him. She leaves you guessing about Assata's mental state - her arguments are impassioned and convincing but they're tinged with a touch of madness as she speaks to her grandmother's photo (and seems to believe it replies) and her passion can tip into downright insanely dangerous behaviour. But Andoh's not let down by her younger co-star either, newcomer Omole (this is his professional debut) bringing a contrasting energy, providing much of the play's lighter touch as well as the pathos of an optimistic young man gradually realising the world isn't always on his side.

Lynette Linton directs a streamlined production that plays to the script's strengths and covers up some of its weaknesses - Ssebandeke makes a confident and nuanced playwrighting debut but trips himself up a bit when trying to provide an explosive finale, going in too big then getting stuck on the fact that there's only so much you can do with a fictional story about a real person who's still alive somewhere in Havana. Imperfections aside there's plenty of fireworks in both the story and its telling, and another example of the Gate providing an intense and complete experience in a short amount of time.

Assata Taught Me by Kalungi Ssebandeke is booking until the 27th of May at the Gate Theatre.