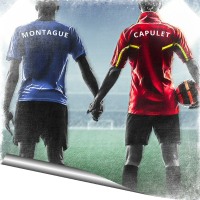 Sometimes my, some might say fairly reasonable, resolution not to see plays I already know I don't like, is at odds with my intention to keep an eye on gay-themed theatre, and see if it's being held to a high quality. Which brings me to the Union's adapted version of Romeo and Juliet, which director Andy Bewley gives not one but two high concepts: It's now a gay love story, and one set in a world synonymous with toxic masculinity - professional football. Montague and Capulet are two Verona teams with an historic rivalry, Romeo (Abram Rooney) plays on the former's youth team, Juliet (Sam Perry) on the latter's, and when they fall instantly and violently in love feel the need to keep it secret. Especially once Romeo ends up in the middle of a violent clash between the two sides that leaves two people dead.

Although the female lead has been given to a man, there's give and take as a number of the better male supporting roles have been switched to female, and women actually slightly outnumber men in the cast. 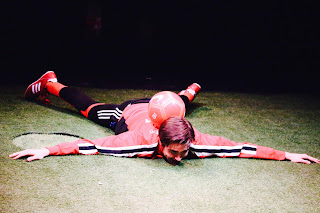 The script has been adapted by Joe M Mackenzie, who's swapped all the personal pronouns, plus words like husband/wife, but hasn't given the characters twee gender-flipped names. Imposing this much of a high concept can be problematic, and of course there's moments where the play strains against it, although not necessarily in the ways you might think: The basic premise is inspired by the lack of out gay professional players, and this is, if not what Romeo and Juliet are now, certainly what they aspire to be; but most of the time it feels like we're spending time with rival gangs of fans rather than the players themselves, and I think sticking more to the latter idea might have been clearer overall. 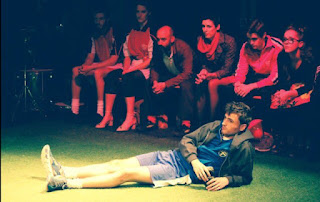 But that aside it's surprising how well the conceit works. Of the two, Romeo is out of the closet, at least to his friends, and Bewley opens by showing the contradiction of a simultaneously homoerotic and homophobic world by putting the usually unseen Rosaline (Anthony Fagan) on stage: He and Romeo practice their tackling, getting very up close and personal, but Rosaline pushes him away when he wants to play with a different kind of tackle. 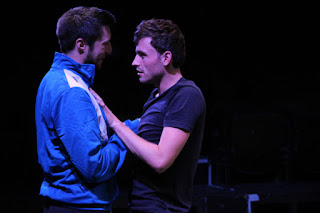 But the most effective scene is the one in which Juliet's father flies into a rage over her turning down his choice of husband. With the gender-flip, Paris (Allegra Marland) is now an Essex girl and wannabe WAG who would provide a beard for Juliet; Capulet (Steven Rodgers) screaming at Juliet about how Paris posesses all the qualities he could possibly ask for in a woman takes on a very different kind of meaning when we know he'd rather be with a man, and even the anachronistic arranged marriage makes a kind of sense in the context of parents desperate to marry off their young son to avoid the truth about his sexuality. 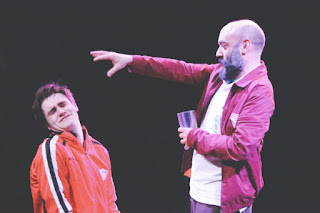 There's lots of little creative touches Bewley brings that fit really well, like the Capulets' ball turning into watching the match at a pub, or Friar Laurence's speech about poisons being aimed at a can of Strongbow. It's no secret I don't like this play, so it's pleasing that Mackenzie's edit gets rid of a lot of the moments I find particularly problematic, like those that kill the tension leading up to the climax - no more lectures on bank holidays in Mantua or detailed descriptions of shops, although some day someone will find a way to also get rid of the final Basil Exposition speech tediously describing everything we've just watched. 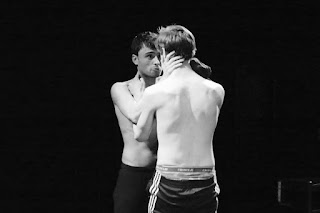 The production is less lucky in its supporting cast, who are for the most part too young for their roles and gabble a lot of their lines. Some of the staging doesn't make much sense either - why Mercutio should keel over dead a few minutes after being punched is a mystery, and the ending is a confused rush. But we're in confident hands with the two leads, Rooney giving Romeo a cockiness but with nervously twitching hands that reveal it as a front; Perry's Juliet is more of a distracted dreamer. Both sweet boys but both given moments of sudden and vicious violence that suggest the consequences of making them live a certain kind of image of what a man should be. Though the reconciliation of the families is fluffed, the ending is changed to leave Paris alive, Romeo's holding off on killing her perhaps a different kind of positive ending, the couple's love having laid some of their demons to rest even if it's too late. It ends up being the most enjoyable production of this play I've seen in some while, although the easy-on-the-eye leads probably have something to do with that, to be fair.

Romeo and Juliet by William Shakespeare, adapted by Joe M Mackenzie, is booking until the 20th of May at the Union Theatre.