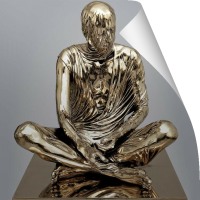 It's ironic that Gregory Doran, to me the epitome of reverential, by-the-numbers Shakespeare, should have delivered my favourite-ever Julius Caesar a few years ago in a comparatively exciting and revelatory production; because Doran having temporarily handed over the reins to Angus Jackson for the Roman season at the RSC, it's Jackson who now serves up perhaps the most vanilla version of the same play I've seen so far. Have no doubt you can expect togas, swords and sandals from Robert Innes Hopkins' design as Julius Caesar (Andrew Woodall) returns to Rome triumphant after a military victory. His popularity sees the people clamour to give him political power at home, but not everyone's impressed: Cassius (Martin Hutson) has never been a favourite of Caesar's and doesn't want to wait and see how he'll fare under the new regime.

He finds a similarly-minded faction of conspirators willing to assassinate Caesar, but knows that if the plot is to be believed as being in the public good, the popular and honourable Brutus (Alex Waldmann) will need to be convinced to join their ranks. 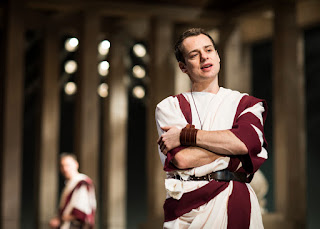 Having killed Caesar, Brutus' biggest mistake is to underestimate the loyal Mark Antony (James Corrigan) who, after the conspirators thought they'd convinced the people they'd acted in their best interests, manages to change their minds and fire them up in a civil war. Julius Caesar is rarely a play I enjoy much but there's an undeniable clarity to Jackson's production. The mass of conspirators can be hard to tell apart but there's a clear distinction between the central three, Hutson's wild-eyed Cassius, Waldmann's calculating Brutus and Tom McCall's almost gossipy Casca. 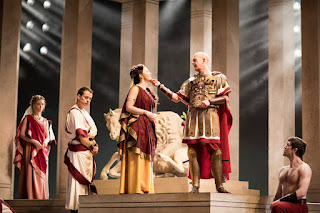 The production doesn't take sides: Waldmann doesn't play Brutus as particularly sympathetic, rather coldly weighing up his options and only showing real emotion just after the assassination as his resolve weakens and he desperately tries to convince himself he did the right thing. (This afternoon's performance was captioned, which gave the opportunity to see both how many of Brutus' sentences begin with "O!" and how Waldmann replaces that with a growl.) Casting his long-suffering servant Lucius as a child is undoubtedly another factor in making him seem quite a dickish Brutus. 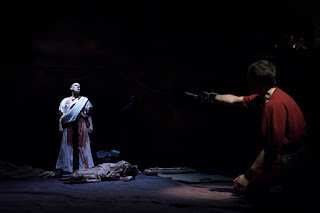 But we're not really on-side with Mark Antony either - it's very clear that his "Friends, Romans, countrymen" is the ultimate manipulative political speech, protesting his simplicity and inability to twist words while doing just that. Once the plebs are gone he even rips up Caesar's will, putting a question mark over the authenticity of his biggest bargaining tool. 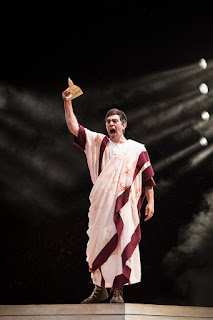 It's in the language that the production stands out, both in the big speeches and in little things like realising how often the characters bring up the inevitability of death as both a justification for speeding other people's up, and an attempt to comfort themselves at losing a loved one. It's like a particularly nihilistic version of Hamlet's "fall of a sparrow" speech. 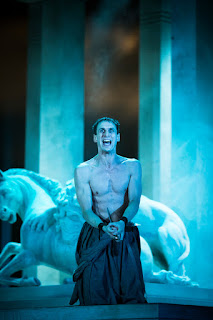 Although cross-cast with Antony and Cleopatra the characters who appear in both plays don't duplicate their roles, with them cast noticeably younger here - Jon Tarcy is a brattish Octavius (another character aware of the advantage of being underestimated,) so Ben Allen gets Cinna the Conspirator here instead. The RSC has been good on diverse casting lately but there's no gender-swapping here, this is a very #masc affair with only Shakespeare's original tiny roles for wives giving female actors a voice (Hannah Morrish just about manages to make herself noticed as Portia before getting bumped off offstage.) 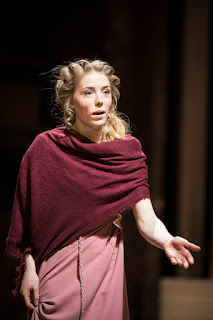 I didn't really dislike anything about the production, because I'm not sure what there really was to like or dislike. I'm easily distracted by things like Corrigan, Tarcy and Hutson (who's taken the line about "lean and hungry" Cassius to heart by the look of it) running around with their shirts of for much of the first half, so it's not like I found it problematic exactly. But with everyone fully dressed after the interval it was harder to ignore the fact that, while perfectly serviceable, this Julius Caesar (which once again sees the RSC nudge one of the shorter Shakespeares over the three-hour mark,) doesn't come close to taking any risks*.

Julius Caesar by William Shakespeare is booking in repertory until the 9th of September at the Royal Shakespeare Theatre, Stratford-upon-Avon; then from the 24th of November to the 20th of January at the Barbican Theatre.

*I thought for a moment Waldmann and Hutson might play out the homoeroticism between their characters but it doesn't end up being explored.
Posted by nick730 at 21:45