Theatre review: A Lie of the Mind 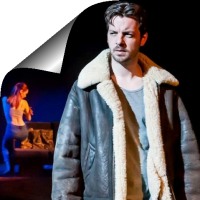 I'm still a long way from being a fan of Sam Shepard's work but I've been getting on a lot better with the plays that have been revived this year. They're still quintessentially American, and a focus on what it means to be an American man is at the heart of them, but like in Buried Child there's a wider scope of interest and an unsettling edge of the surreal to A Lie of the Mind. Initially appearing to be about domestic violence, it becomes a spiral of insanity as the violent, unpredictable drunk Jake (Gethin Anthony) arrives at his brother's house claiming that he's beaten his wife to death. In fact Beth (Alexandra Dowling) is still alive, but the attack has left her with brain damage. Jake, too, seems to be out of his mind, the extremity of his violence leading to a nervous breakdown. Both of them get taken back to their parents' homes to recover, but neither house is really a good place for anyone's mental health.

Beth's brother Mike (Robert Lonsdale) takes her back to a remote, snowed-in Montana farm, where their mother Meg (Nancy Crane) is in the early stages of dementia, while their father Baylor is a kind of wild man of the woods, which is why he's played by John Stahl. 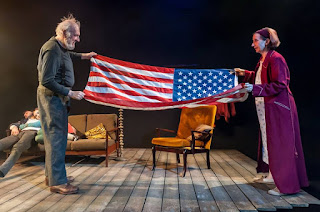 Jake is looked after by his mother Lorraine (Kate Fahy,) whose favourite he unashamedly is, and who'll forgive him any of the numerous crimes he's clearly committed, while his brother Frankie (Michael Fox) goes in search of Beth, to find out if she really is dead. The families have opposite approaches to their children's problems: Beth, the victim, is so badly injured it takes her a while to learn to walk again, and her speech never recovers properly, so she's more or less returned to a child-like state, but her parents and especially Baylor demand she hurry up and learn to look after herself again. Even though his own family successfully keep him away from alcohol, Jake still stomps around like a toddler while Lorraine indulges him, and everyone's reaction suggests he isn't behaving that differently to how he did before his breakdown. 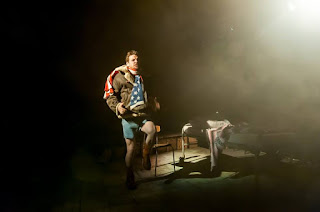 James Hillier's production is dominated by a neon crescent moon - giving it a bit of a feel of John Tiffany's Glass Menagerie - that's perhaps a reference to the lunacy that increasingly grips all the characters. Jake and Beth have obvious mental trauma from the start and all the parents are somewhere between eccentric and unhinged, but the seemingly stable Mike starts to lose it when he returns to the farm and becomes obsessed with hunting stags and/or Jake, and Frankie gets shot in the leg and left to die slowly in a growing delirium on the couch. Even the most level-headed character, Jake's sister Sally (Laura Rogers) calmly stands back and watches her mother burn her house down. 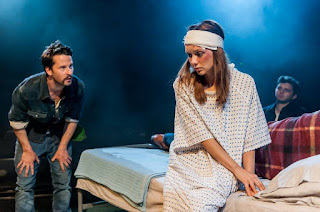 I liked Rebecca Brower's split-level set; the stage is in thrust so the effect is probably different from the sides, but from the centre block it puts the farmhouse interior at a distance that suggests its remoteness. There's some blazing and committed performances which kept me invested throughout the first act; the first half of Act II is too heavy on poetic musings and reminiscences, which made it feel overlong to me, but it does build to something eerie and intense. It was a cast I like that attracted me to a play by a writer I'm not sure about; in the end I'm glad I saw it but it's quite a tiring experience to watch, taking a situation that's very naturalistic on the surface and making it enigmatic.

A Lie of the Mind by Sam Shepard is booking until the 27th of May at Southwark Playhouse's Large Theatre.