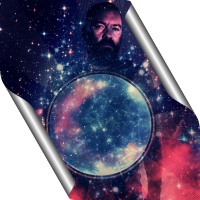 Lizzie Clachan has turned the Young Vic into a planetarium for Joe Wright's production of Brecht's Life of Galileo, one of the most visually stunning and inventive shows on the London stage right now. The set is in the round, with a central pit where some of the audience sit on cushions, with the actors mingling around them. It gives the impression of a group of students in a relaxed setting, sitting around a charismatic teacher who's on a roll. The teacher is Galileo Galilei (Brendan Cowell,) the subject he's excited about the Copernican Heresy, which proposed that the Earth revolved around the Sun, and which astronomer Giordano Bruno had recently been burned at the stake for promoting. But Galileo teaches in Padua, which has a special exemption from the Inquisition's clutches and besides, having stolen credit for the invention of the telescope, he now has a tool that he can actually use to look at the stars and prove Copernicus right.

But once he leaves the safety of the city, actual provable evidence is no argument against the Church's entrenched beliefs. 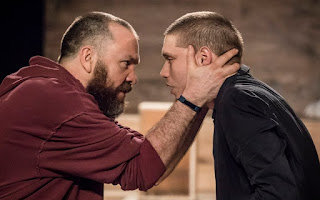 The obvious feature that immediately strikes you about Clachan's design is the round projection screen that covers the ceiling above the stage, where video by 59 Productions is projected to create the stars first seen through Galileo's telescope. It also provides background to certain scenes and a witty/ominous moment when a giant eye looks down on the audience while Galileo waits for the Inquisition, but the screen actually spends most of the play blank because Wright hasn't built his production around it. Instead he's got a full theatrical toybox at his disposal and uses it precisely for the best effect of each scene to create an evening full of coups de théâtre - it's the timing of the introduction of a major new piece of set that really makes it, but everything from puppetry to lighting, confetti to carnival, from busy Javier de Frutos movement direction to stripping everything right back to two actors talking to each other, is used to wring the best from every moment. It's interesting that Wright is mainly a film director and this is only his third professional stage job; or maybe that's precisely why he's taken this opportunity away from the day job to use a completely different toolbox. 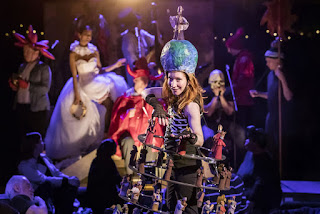 Wright says in the programme notes he came late to Brecht because his reputation of not being interested in emotion put him off; I still think Brecht never had any intention of practicing what he preached on that score, and once again this play works on giving you the full force of Galileo's love for his work, an enthusiasm that spreads to the audience and makes us feel as betrayed when he renounces it as his students do. It's a punky production with a loud dance soundtrack by Tom Rowlands that works on the audience's emotions like a DJ set, and it centres on Cowell's Aussie Galileo, in T-shirt and jeans with an overgrown beard, looking like someone who's come to fix the boiler and giving the impression of someone who's happy to muck in and get his hands dirty in the search for answers to his endless supply of questions. 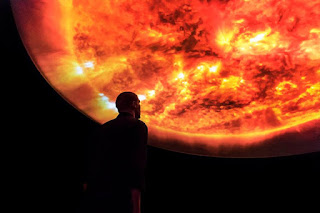 Billy Howle plays his student Andrea from wide-eyed ten-year-old to dedicated adult scientist, with Ayesha Antoine as his mother and Galileo's housekeeper, a slightly despairing voice trying to keep their enthusiasm from killing them. In another element that disproves the theory of Brecht's plays having no emotional centre, Anjana Vasan is his daughter Virginia, whom he has little time for due to her religious dedication, but who remains loyal to the man if not his work, even as he causes her engagement to Ludovico (Joshua James) to be broken off. Brian Pettifer gamely steps into the string y-fronts of one of the play's most famous scenes, as the naked Pope being dressed up to an imposing figure, his attitude becoming more authoritarian as his appearance does. 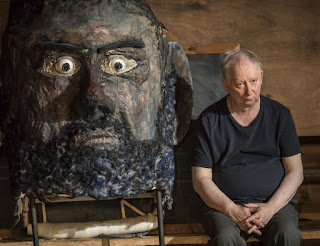 The argument that the Church represents more general reactionary forces also holds up, especially in the scene where the Church's "scientists" arrive to inspect Galileo's findings: In refusing to actually look through the telescope at tangible evidence and asking Galileo instead to engage in a formal debate on why he presumes to challenge Aristotle's teachings, they're all too familiar as the kind of people who've had enough of experts. 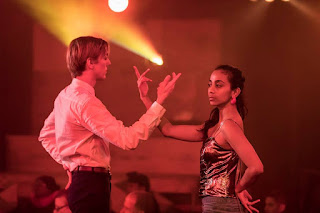 I was in the cheaper onstage seating - although there's no seats at all as it turns out, you sit on the stage floor with a few cushions to help prop you up. Sitting up against the edge means you can give yourself some back support, and they haven't filled the stage with too many people - the actors have to get around after all - so there was space to change position and avoid my back seizing up; so although not the most comfortable theatre seating ever it actually ends up better than some places you could spend three hours in ("better than the Sam Wanamaker, anyway" was Ben's verdict.) And I'd certainly recommend these as the best non-seats in the house as it puts you right in the middle of the action, with the cast running around you and popping up among you (and only the very mildest moments of audience interaction, essentially the actors might talk directly to you once or twice.) 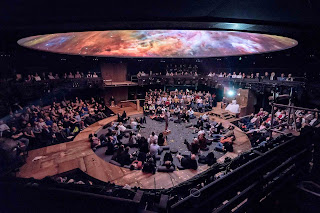 It also puts you in the perfect position to lie back and look at the ceiling when the celestial projections kick in, which is reason enough to sit there. As soon as I saw the show's design I knew how Wright would use the screen to end the show, but it didn't stop me from tearing up a little at the combination of video and music. Turning endless debates about science into a funny and involving look at universal themes, it's an evening of pure theatre you wouldn't want to miss.

Life of Galileo by Bertolt Brecht in a version by John Willett is booking until the 1st of July at the Young Vic.