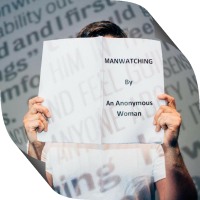 It originated at the Edinburgh Festival a couple of years ago, which may explain why Manwatching's high concept relies on a plentiful supply of stand-up comedians: The comic monologue is written by a woman, who's been kept anonymous for reasons that aren't entirely surprising (the fact that she mentions having trained as an actor made me think Alecky Blythe*, but it would be a major change of style for her, and besides, there's nothing to say it's an established playwright, for all I know this could be her first work ever staged.) Whoever she is, this is very much a woman's story, but delivered by a different man every night. The Royal Court has listed the male comedians who'll be taking part but not their schedule, so you don't know who your performer is until they arrive onstage - tonight it was Adam Buxton, to the obvious excitement of some of the audience, who walked out onto a stage bare except for an elderly printer. The printer's there because the comedians have no idea what the content of the monologue is; it prints out 45 pages of script while they introduce themselves.

So it's hard to review anything other than the text and the general concept of Lucy Morrison's production as the performance is up to chance - all I can guarantee is that if you see this it won't star Adam Buxton, because just as with An Oak Tree, performing this once makes the comedian by definition ineligible to perform it again. The monologue itself is about sexual fantasies and sexual politics, the anonymous woman describing her darkest and most bizarre masturbatory fantasies and also some of her past boyfriends - unsurprisingly only those long gone get described in huge detail, all we find out about her husband is that she has one.

Getting a man to read the story is a commentary on the fact that people are statistically more likely to believe something when told by a man, and a question about the ridiculousness of that fact; although it sounds like an opportunity to embarrass the reader it doesn't play out like that, at least not with Buxton's affable performance, although it probably depends on who you get - I imagine if it's Miles Jupp he'll play up the awkwardness a lot more. The "unseen" gimmick, then, doesn't really hold up as well as that of having a man read the text, and it's tricky as reading a sentence out loud without knowing how it ends can lead to having to go back and start again. I did think it was going to be hard to keep 45 pages to the advertised 1 hour running time, and Buxton didn't get even close: He finished at 9:30, when a second performance was actually due to start, so on the way out the queue for that went all the way down to the ground floor.

As well as the gender politics and fantasies even she finds weird, the writer gets you wondering just what goes on in the head of people you've slept with, which means Manwatching can leave you a bit paranoid; but for the most part it's a series of good jokes and funny stories, which probably explains why comedians are specified. It's a bit rambling, but then so's this review.

Manwatching by an anonymous woman is booking until the 20th of May at the Royal Court's Jerwood Theatre Downstairs; then continuing on tour to Belfast, Suffolk and Edinburgh.

*Michaela Coel seems too young and I can't imagine it would have occurred to Phoebe Waller-Bridge to stay anonymous when describing her vagina
Posted by nick730 at 22:26