Theatre review: Vice Versa, or, The Decline & Fall of General Braggadocio at the Hands of his Canny Servant Dexter & Terence the Monkey 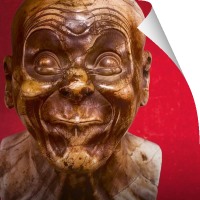 The Roman theme of this year's RSC season in Stratford extends to the Swan, most obviously in Vice Versa, or, The Decline & Fall of General Braggadocio at the Hands of his Canny Servant Dexter & Terence the Monkey. Phil Porter's farce is inspired by the plays of Plautus, although they're not the only thing that's been "lovingly ripped off" - that tagline itself comes from Spamalot, and Janice Honeyman's production resembles nothing so much as a Carry On film - there's even a nod to the famous "Infamy, infamy, they've all got it in for me" line from the play's gull, Braggadocio (Felix Hayes.) The vain and ludicrous General returns to Rome from a war, bringing with him some of the people he's enslaved - including the lady Voluptua (Ellie Beaven,) whom he's taken as a concubine.

When Voluptua's long-lost fiancé Valentin (Geoffrey Lumb) arrives in town to stay with Braggadocio's next-door neighbour Philoproximus (Nicholas Day,) Voluptua sneaks next door to be with him. But to get away she needs a cleverer plan, and turns to the General's slave Dexter (Sophia Nomvete,) who concocts a plan in which Voluptua pretends to be her own identical twin. 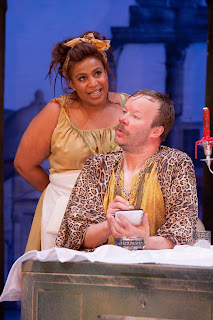 This is, needless to say, very broad comedy and I didn't know if I'd be able to get into it, but thinking of it as Carry On Up The Tiber really did help just accept it for what it is. I can't say I loved every minute but for something so full of mugging and slapstick I got on with it surprisingly well. The leads help - we've seen plenty of times how well Hayes can do with this kind of fool, and Nomvete is so up-front about the fourth wall-breaking daftness of it all it's easy to go along with it. An extended joke about grocery-based puns is pure panto, and she brings that experience to it. 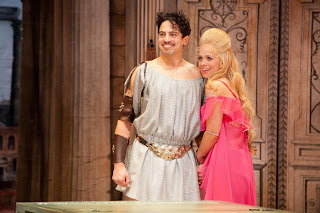 Beaven, Day and Lumb all gamely join in - given where I grew up, I enjoyed the running joke of Voluptua pretending to be Greek by listing Greek foods. And with the addition of Kim Hartman's over-the-hill prostitute Climax, this at least makes a welcome change from the rest of this summer's season in that women are not only visible but get to have the upper hand. The scenes with the other servants (Steven Kynman, Byron Mondahl and Laura Kirkman) didn't hold my attention as well, and considering he appears in the play's subtitle the monkey Terrence (Jon Trenchard) really doesn't have anything interesting to do. But with some good visual gags in Colin Richmond's design - I liked the shopping delivered by Ocadus, and Braggadocio's Venus socks were funnier than the Superman ones - I smiled through most of this, and occasionally laughed out loud.

Vice Versa, or, The Decline & Fall of General Braggadocio at the Hands of his Canny Servant Dexter & Terence the Monkey by Phil Porter after Plautus is booking in repertory until the 9th of September at the Swan Theatre, Stratford-upon-Avon.