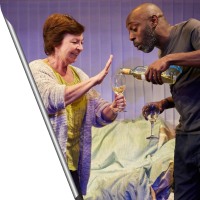 Barney Norris is an up-and-coming playwright who's presumably got a big change of style in store - this time next year his Nightfall will be playing at the new 900-seat Bridge Theatre. For now though things remain super-intimate again as he opens another new space, the Bush's Studio which aims to recreate roughly the size of the original pub theatre. While We're Here takes place in a cosy living room (designed by James Perkins) in Havant, a town near Portsmouth which, if the play is anything to go by, seems more like the middle of nowhere. Carol (Tessa Peake-Jones) has lived there, and in the same house, almost her entire life. Eddie (Andrew French) is more of a drifter, literally so in recent years when he's fallen on hard times and been sleeping rough. The two had a brief relationship twenty years ago soon after Carol's divorce, and have now reconnected by chance when they bumped into each other in a park. Carol has invited him to stay at hers until he can get himself settled.

Although they're opposites in many ways it's clear how fond the two are of each other, and having met him again Carol is forced to confront her feeling that Eddie, not her ex-husband, was the real love of her life and the biggest missed opportunity. 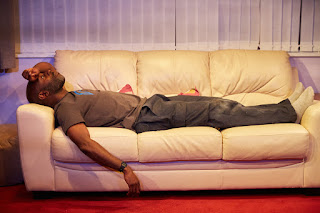 While We're Here isn't about making up for lost time though, it's about having boxed yourself in so far you're unable or unwilling to take a chance for escape - it's much more the stable but lonely, quietly sad Carol's play than it is the more seriously mentally ill, but adventurous Eddie's - while both fear they've wasted their lives he holds onto dreams of still being able to make up for it, while she's resigned to an uneventful life that'll quickly be forgotten once she's gone. 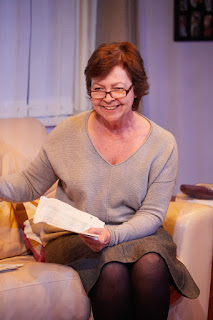 If anything Norris tries a little too hard to make this a tearjerker, but his regular collaborator Alice Hamilton's production still manages to be heartbreaking, helped by the performances - especially Peake-Jones, who takes us from a giddy excitement in the opening scene to a weary, self-sabotaging resignation by the end. And a little bit of that giddiness stays with the play throughout in a sense of humour that finds real laughs in the banalities that people fill their lives with - "award-winning car park!" - even as it mourns the speed at which time flies.

While We're Here by Barney Norris is booking until the 27th of May at the Bush Theatre's Studio; then continuing on tour to Oxford, Bristol, Havant and Salisbury.