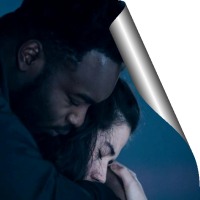 Richard Twyman takes over as Artistic Director of ETT with a production of Othello whose stripped-back nature points to the restrictions of a touring production, but doesn't get in the way of atmosphere and dangerous intensity. Othello (Abraham Popoola) has wooed and married Desdemona (Norah Lopez Holden) in secret, and when her father finds out he tries to get the soldier punished. But it's clear Desdemonda acted entirely of her own volition and besides, despite being an outsider to Venice, he's one of their most effective generals, and is needed at a battle in Cyprus. So this plan to take down Othello fails, but its architect remains unsuspected: Iago (Mark Lockyer,) a trusted ensign overlooked for promotion, has developed a violent hatred of his general, and now comes up with a much more complicated and bloody plot, to convince Othello his new bride is cheating on him, and fan his jealousy into a murderous rage.

Twyman's production plays down the military setting, bulletproof vests the only real reminder in Georgia Lowe's design. It's an approach I'm wary of, as various productions have used the wartime theme to find reasons for the ease with which the lead is manipulated. 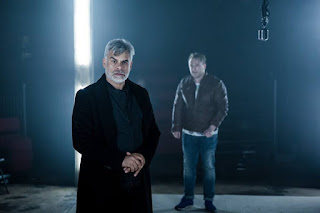 Instead Popoola is a very young-looking Othello, a large and imposing man but immature and quick to rage, making Iago's job all too easy for him. Lockyer's Iago, meanwhile, is a chameleon, different to everyone he speaks to: He's a low-key tempter to Othello, but to Cassio he uses the fact that he's older to present himself as a father figure and voice of experience*. And then again to the soldiers he's one of the #lads, a contrast to Piers Hampton's rather cuddly Cassio, refusing a second drink while his men are tasering one of their number (Joel Macey, who's so twinky I kept expecting him to be Cassio,) in the balls for a laugh, and it seems the rank and file are no more pleased about Cassio getting the expected promotion than Iago is. 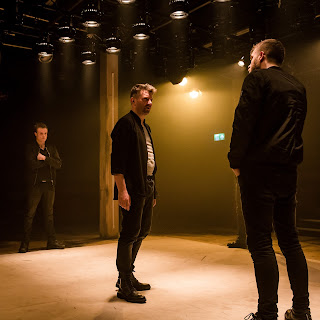 As for Iago's motives for doing all this, there's an interesting emphasis: His being overlooked for promotion, as well as plain and simple racism, are usually the focus, while the third reason he gives seems like justifying his actions to himself more than anything else. But Lockyer plays this third reason as the real root of his hatred: He genuinely seems to believe that Othello has had an affair with his wife Emilia (Katy Stephens) and thinks he's giving him a taste of his own medicine. Emilia is an often overlooked role but Stephens was one of the reasons I booked to see another Othello and she does the character justice with a couple of really devastating moments, and body language that more than hints at Emilia as an abused wife. She and Lopez Holden deliver one of the best versions of the "would you cheat on your husband in exhange for the whole world" scene I've seen. 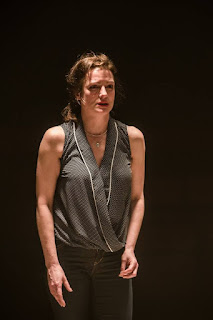 Stephens wasn't the only reason I booked of course - I think even I sometimes forget how much I like the play itself, it's got a real drive and pace that Twyman's production really brings out. In many ways it's a very clean, straightforward telling of the story, but it's not without the occasional imaginative flourish: Moving Desdemona's death from her bed to a yoga mat where she's meditating with headphones on makes for a genuinely chilling interpretation that's got a touch of the slasher movie to it, as Othello talks about his plan to murder her while she's inches away, awake but not hearing him. The ending's all the more stark after a production that finds humour and lightness, not only in Brian Lonsdale's Geordie Roderigo, but in the genuine relationships between the unsuspecting characters. 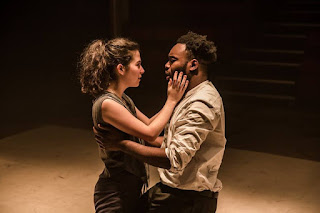 Less successful is setting up Othello as a Muslim in the opening scene, after which he - converts? Pretends to convert? It's not particularly clear and doesn't follow through the rest of the production very well, although it does set up both the infamous handkerchief, and a crucifix with a nasty surprise in it that reminded me of Cruel Intentions at the finale. Most of the flourishes work though, and in any case the production is strongest in offering a clear, exciting telling of the way the play works as a thriller, inexorably winding up to something nasty and inevitable.

Othello by William Shakespeare is booking until the 3rd of June at Wilton's Music Hall.

*I don't think it's a coincidence that the production uses the version of the text that calls him "ancient" rather than "ensign."
Posted by nick730 at 23:50