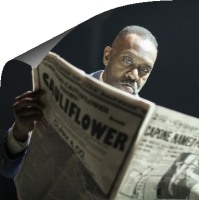 In one of the complete restructurings of the Donald and Margot Warehouse auditorium that have been an occasional theme during Josie Rourke's tenure, Peter McKintosh has added an extra row of seats to make the circle in-the-round, and removed all the stalls seating, to be replaced by tables and chairs all around the stage. It transforms the venue into a Prohibition-era Chicago speakeasy for Simon Evans' production of Brecht's The Resistible Rise of Arturo Ui, about a man seen as a joke, rising to great power and bringing destruction in his wake. Arturo Ui (Lenny Henry) is a lumbering, awkward gangster who chances upon some dirt on the powerful Dogsborough (Michael Pennington,) and blackmails his way into the city's cauliflower trade. With the success of his protection racket over the vegetable market, Ui takes acting lessons to disguise his awkwardness and make him a better public speaker, and his new mix of threats and rhetoric starts to build a following.

Evans' hook for the production is to make it semi-immersive with a lot of audience participation: Those on the stage get co-opted as hat racks, accomplices and corpses, with one bemused lady finding herself on trial. 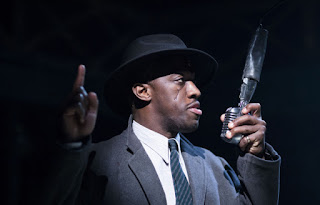 Those of us in the cheap seats get coached by the actors to provide some noise and support at specific moments, to build up the idea of a fanbase growing for Ui and his vicious cronies. The reliance on the audience is risky and leads to inevitable mixed results; tonight's crowd seemed largely very game and joined in, making for some of the more energised moments, but even so there's times when the attempts to make this immersive fall flat. 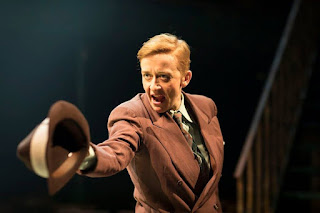 Brecht's 1941 original is famously an overt satire on Hitler's rise to power, and Bruce Norris' new adaptation tries to replicate some of the original topicality by making Henry's Ui an obvious Donald Trump spoof. It's not a seamless substitution though, and the references largely boil down to the same soundbites that numerous other shows lately have been using for a quick laugh. As parody it borders on the affectionate, or in any case it doesn't feel harsh enough in the wake of a healthcare bill designed to kill hundreds of thousands. 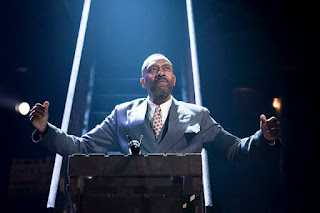 The plotting, too, is an odd mix. Much of Brecht's work, including this, is disjointed and can come across as sketchy if not done carefully, and Norris seems to have been weirdly interested in the precise mechanics of the cauliflower trade over and above the gangster story. The first half-hour gives us a lot of background to the grocers leaving themselves vulnerable, and we don't see much of the leading man. The production as a whole seems keen to keep him in the shadows, so it's presumably deliberate, but it does mean we don't really get much idea of the man who is a punch line, insidiously becoming a real threat while nobody takes him seriously. 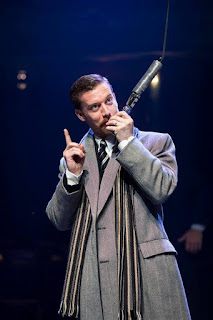 With some very entertaining scenes as well as real lulls, this is a wildly uneven show, its better moments helped by a very strong supporting cast including Giles Terera as the right hand man Ui betrays, and Philip Cumbus as his contact on the cauliflower board. Tom Edden gets to chew the scenery as the drunk thesp who coaches the gangster, and Lucy Ellinson can be relied on to bring some energy when it lags as a Joker-like hyperactive hitman. But Norris and Evans can't really pull all the best parts together, the storytelling lacks clarity and the show ends up sadly resistible.

The Resistible Rise of Arturo Ui by Bertolt Brecht in a version by Bruce Norris is booking until the 17th of June at the Donmar Warehouse.