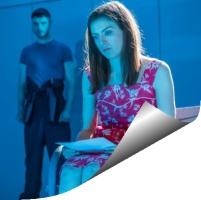 The latest Almeida season opens with Martin Crimp's 1993 play The Treatment - "treatment" as in the summary of a movie pitch, as well as the way people treat each other. Anne (Aisling Loftus) is describing a difficult life, culminating in her marriage: Kept in a small apartment she never leaves, her husband would sometimes tie and gag her, not to abuse her physically but to give lengthy speeches, waxing lyrical about car parks and strip lights. She's telling her story to Jennifer (Indira Varma) and Andrew (Julian Ovenden,) married as well as being producing partners, and interested in developing her story. They bring in down-and-out playwright Clifford (Ian Gelder) to script it, and bombastic actor John (Gary Beadle) to play the husband, as well as to provide some star wattage that'll attract investors.

All of these, plus ambitious intern Nicky (Ellora Torchia,) chip in not only by changing Anne's story to fit what they want to see, but also taking ownership of it. 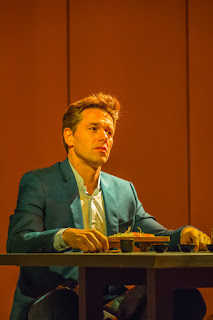 Someone else with a stake in her story is her estranged husband Simon (Matthew Needham,) who's turned up again; Anne is confident he'll never hurt her, but he's perfectly capable of hurting someone, and she might be able to steer him towards someone who's pissed her off in her dealings with the producers. So the central story is a familiar Hollywood fable of an innocent's true story being appropriated and corrupted, but this is a Martin Crimp play, albeit a comparatively coherent one, so the characters' various Odysseys around New York are shot through with more than a touch of the surreal. 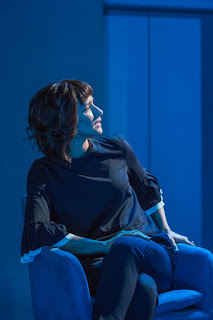 Most notably this includes a blind NY taxi driver (Ben Onwukwe) who needs his passengers to give him directions, although there's oddities throughout, like when we first meet Clifford selling silverware in the street out of a suitcase (featuring a rare appearance by Chekhov's Fork,) and when his own bizarre playscript gets first mixed up into his adaptation of Anne's story, then into reality. Anne herself is a bit of an enigma in the middle of all this, being shunted around by more dominant personalities. Ovenden and Varma create slick monsters out of their power-couple, he using their own relationship as part of mind-games with Anne, she enjoying making life difficult for a waitress (Almeida stalwart Hara Yannas,) simply because she was a waitress herself once and knows how annoying she's being. Gelder is an expert at creating seemingly likeable old men with a dark underside, and Needham also keeps you guessing with the lumbering Simon, whose intelligence and apparent violent nature are both regularly contradicted. 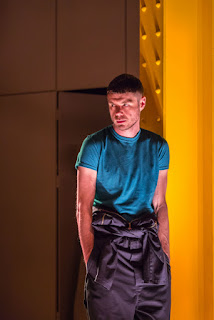 Lyndsey Turner's production doesn't offer easy answers on what Crimp's saying about the commodification of people and their lives, but ramps up the feeling of black comedy in a show strong on visuals: Giles Cadle's white box set is filled with props and costumes in black, white and primary colours, while Neil Austin's lighting also tends to flood it in a single colour. Great work from the technical side on the set changes as well, a lot of furniture shifted around and walls rejigged every time the curtain comes down for a very few seconds (projected onto it is video of New York streets seen from a cab, getting blurrier as the evening goes on as a shout-out to the blind driver, until by the end it looks like the Jon Pertwee Doctor Who credits.) Fork aside, Crimp makes a mess of Chekhov's Gun (both its introduction and use are very heavy-handed) and the use of this kind of story to show people treating each other as commodities isn't exactly fresh, but it's telling is bizarre and striking.

The Treatment by Martin Crimp is booking until the 10th of June at the Almeida Theatre.