Theatre review: Gently Down the Stream 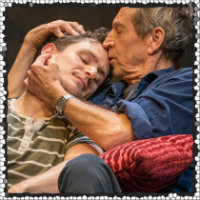 Martin Sherman, who turns 80 this year, has a long list of theatre and movie writing credits but is still best remembered for Bent - which itself has its 40th anniversary this year - a play that reminded people of the oft-forgotten persecution of LGBT people by the Nazis. Having long wanted to write a more general "gay history" play he finally struck on the way to do it by following 13 years of a relationship with a 35-year age gap, in Gently Down the Stream. And "gently" is the right word for a play that covers some of the same ground, and has some of the same concerns as, The Inheritance, but in a much more intimate way. The concerns are those of Beau (Jonathan Hyde,) originally from New Orleans but, having travelled the world accompanying torch song singers on the piano, now long since settled in London where he works as a lounge pianist in a restaurant.

When they first meet he's 62 and Rufus (Big Favourite Round These Parts Ben Allen) is 28; Google is an exciting and obscure new website as is Gaydar, where Rufus first spotted Beau and arranged a hookup. 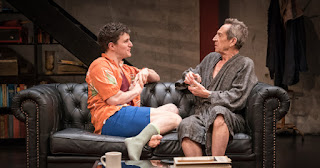 Beau assumes Rufus has a thing for "daddies," but in fact the younger man had researched him before contacting him (to be honest I'd have liked a few more moments exploring the creepy edge to this.) A bipolar lawyer in a high-pressure job who romanticises the past as a coping mechanism, it's Beau's experiences and the people he met in his life that first attracted him. With Beau being a thinly-veiled avatar for Sherman, these people included Tennessee Williams, Truman Capote and James Baldwin, while he spent much of his career as accompanist to mid-20th century gay icon Mabel Mercer. Rufus wants him to record stories of his life on camera for him; realising that young gay men don't necessarily have an idea of the community's history, Beau uses this as an opportunity to make a record of it. 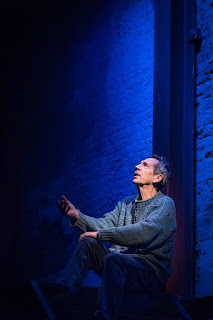 This is a much darker story than the romanticised image Rufus has, and includes being driven out of New Orleans by his family, losing one boyfriend to a homophobic attack and another to AIDS. Sean Mathias' production stages these speeches as quiet monologues, Beau sitting on the stairs of Lee Newby's split-level set and unsentimentally reeling off half a century of persecution, but the happier, funnier times as well. The closest link to The Inheritance comes when Beau talks about Judy Peabody, whose story Matthew Lopez adapted for his own play's finale. But Gently Down the Stream, whose title comes not from one of Beau's own stories but one he himself was told by a World War II veteran, has an ultimately optimistic view of the gay community being able to pass down its oral history, and it comes in an unlikely way. 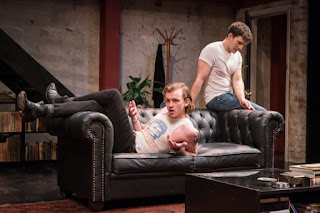 Beau's fears that he'll be ditched for a younger man come true when Rufus meets performance artist Harry (Harry Lawtey.) But while Rufus moves out and they're no longer lovers it's far from the end of the relationship, and over the years Beau becomes important to both men - Harry even taking his advice to incorporate the old gay torch songs into his act - and the family they can actually have in the 21st century. Sherman's play isn't explosive but it offers stories various generations can find something familiar in, and is a warm tribute to both the necessity and the ability for gay men to make our own families, and tell our own stories.

Gently Down the Stream by Martin Sherman is booking until the 16th of March at Park Theatre 200.