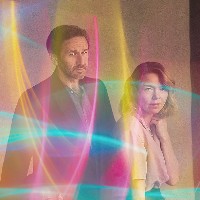 I doubt regular readers of this blog (either of them) will be particularly shocked to see me make one last return to the 2021 West End casts of Constellations in the final week of their availability online: Having watched three out of four casts it would have felt like unfinished business not to complete the set. And it's no slight on Anna Maxwell Martin and Chris O'Dowd that they were last on my list, but with the first and second London casts of Nick Payne's play having been straight white couples in their thirties, a straight white couple in their early forties weren't as much of a stretch when Michael Longhurst's consciously diverse season also offered a black couple in their twenties, an interracial gay couple and a pair in their sixties and seventies. But Payne's love story with infinite possibilities across the multiverse has also proved to take on almost as many possibilities with different casts, so another one always seems to be worth the time.
Constellations takes us from meet-cute to a number of, mostly heartbreaking, endings for urban beekeper Roland and quantum physicist Marianne, and although it's clear early on that this heartbreak is coming (as the story is told slightly out of sequence as well as across different universes,) there's a lot of comic scenes along the way. 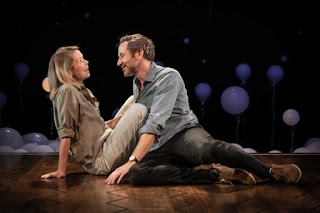 And with Maxwell Martin and O'Dowd both experienced and talented sitcom actors, that's the prevailing feel for this, of a very funny situation comedy with a dark underbelly waiting to take the wind out of everyone's sails. It's fair to say, and not too surprising, that Maxwell Martin's performance is more Motherland than Line of Duty, and that edge of panic is often present in her voice. In my review of the Atim/Jeremiah version I talked about the way different pairings give the power in the relationship to a different partner, and this is one where Marianne isn't as firmly in control. O'Dowd's Roland is the quietly steady, supportive take on the character, although he also has that edge of neediness, making this perhaps the most equal dynamic out of the recent pairings. 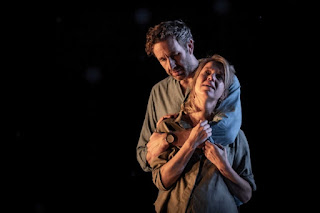 This is one of the touchpoints of this final cast - although predominantly comic, even if you discount the place the story's eventually heading there's a sweetly sad undertone to a lot of their scenes in how much they (or just one or the other) need each other*. It ties in with how tactile the pair are, not necessarily in as overtly sexual a way as the Douglas/Tovey version, but in seeking comfort from each other - in the scenes where the two are broken up, Maxwell Martin and O'Dowd often look like they're barely able to hold off from hugging but know they shouldn't. Add in what I think is the only version I've seen to give the proposal scene an accidental audience of Marianne's students, and it's yet another example of Longhurst using each cast in the rotation as fresh eyes on Payne's writing. 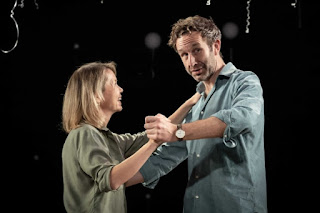 The four recordings are available online for another week (and I wouldn't be entirely surprised to see them resurface in some form,) and I suspect that any one a viewer new to the play chose would be equally satisfying as the play and production are so strong. But the casting gimmick from this summer - in part a practical measure, with the production having later admitted that having multiple star casts available was a safeguard in case one pair had to self-isolate and miss shows - has proved worthwhile on an artistic front as well, the multiple constellations of the play now spinning off into multiple galaxies.
Constellations by Nick Payne is available to stream until the 29th of November on the Donmar Warehouse's website.
Running time: 1 hour 10 minutes.
Photo credit: Marc Brenner.
*as ever with this play a disclaimer that I'm not saying this applies to every scene, Payne includes a handful of alternate universes where the relationship goes to particularly bitter or nasty places where the characters could end up on very different paths
Posted by nick730 at 14:41