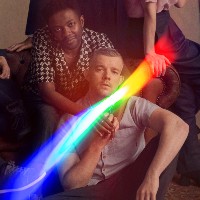 For anyone who needs catching up: Nick Payne's Constellations, one of my favourite plays of the last decade, is back in the West End this summer in Michael Longhurst's original production, with a casting twist that sees four new pairs of actors take on the two-hander in repertory. Tempted as I was to book all four I decided to limit myself to two versions, and even if I hadn't alluded to it in my review of the Capaldi/Zwanamaker version, regular readers of this blog will both have been able to easily guess at the second. Even if it hadn't been for the presence of OG Big Favourite Round These Parts Russell Tovey, part of the idea behind this new casting gimmick was for as many theatregoers as possible to see themselves in Roland and Marianne: So they became a young Black couple, then a much older couple than is usually cast, and now the third cast is here to make them an interracial gay couple*.
So Tovey takes on Roland, the beekeeper, but Marianne becomes Manuel (Omari Douglas,) the quantum physicist. And another infinite set of permutations of their relationship is set off when they meet at a mutual friend's barbecue, and Manny attempts to flirt by telling Roland that nobody can lick their own elbow, or they'd become immortal. 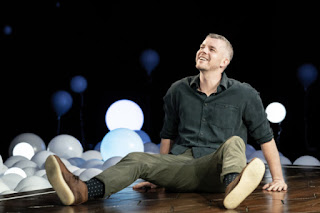 Longhurst's production flashes between different versions of their scenes together, playing out in different ways across the multiverse. Sometimes external factors keep them from ever getting together, sometimes the chemistry just isn't there, sometimes they become a couple but fuck it up somewhere along the way. But sometimes it works out for them and they live together long enough for their relationship to come to a moving end when Manny develops a brain tumour and considers assisted suicide. 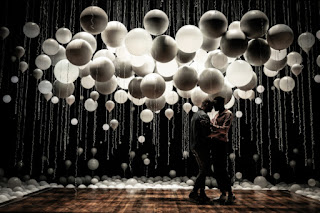 I don't know if it's the fact that this is in more than one way the casting that's tailored to my interests but this is the sexiest pairing by far; there's something very tactile and physical about how Tovey and Douglas perform together that doesn't just convince you of them as a couple you want to root for, but also as one that can't quite keep their hands off each other. Tovey is pretty obvious casting for the sometimes goofy everyman Roland, and is one of the funnier iterations of the character I've seen. Douglas' Manny is quite a spiky, solid take on the character; the play has scenes where we see much less likeable versions of the character, but Douglas isn't afraid to bring a bit of that into the rest of the play - I don't think I've got the impression before quite so strongly that he's genuinely a bit impatient with Roland not understanding quantum physics†. It doesn't make the ending any less heartbreaking, just gives it a different flavour as what we've had foregrounded is the strong, determined side of the character who knows what he wants to do when things get too bad. It also feels like good context for the play's unique way of ending on a note of hope: Manny's thinking is so tied up in his work that his way of giving comfort at the end references time being meaningless on the quantum level. 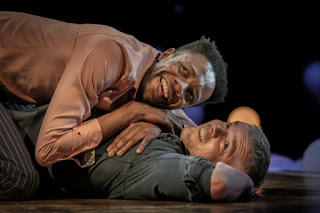 If every demographic change in the casting brings fresh ways of looking at the play, a same-sex couple brings little variations in how camp or butch each of the pair is in different universes, shifting something in their dynamic each time‡. In other ways this is one of the less subtle performances in terms of differences between universes (Tovey's delivery of the "overconfident" iteration of the proposal is certainly.... a choice,) and while it's not something that actually contradicts the play (some variations are, as written, very different,) I think I prefer it when we see what amounts to little more than micro-expressions and variations in vocal tone having world-changing consequences. As well as being a savvy choice of show on numerous practical levels§, this casting gimmick has proven to genuinely have merit as a way of exploring the play's complexity. I may not be seeing all four but hey, there's infinite Constellations in the multiverse, I can't see all of them.
Constellations by Nick Payne is booking until the 12th of September at the Vaudeville Theatre; Omari Douglas and Russell Tovey appear in repertory until the 11th of September.
Running time: 1 hour 15 minutes straight through.
Photo credit: Marc Brenner.
*although I like both Chris O'Dowd and Anna Maxwell Martin their pairing was the easiest for me to eliminate, as they're a straight white couple only a decade or so older than the characters are usually played. But hey, I guess if they want a lot of people to see themselves in the characters, "middle-aged, middle-class white straight people" is there to get the West End's core audience in
†I don't know if this is why Tom Scutt's balloon-heavy design feels like a playful dig at Manny's avowed dislike for them, something I never thought about any of the Mariannes
‡there's also an Easter egg I wouldn't have known about if I hadn't read about it: All versions of Constellations feature one scene performed in sign language. Usually BSL, presumably changing to ASL when it was on Broadway, this cast uses a specific, coded gay sign language that was in use when homosexuality was illegal, a bit like a visual version of Polari
§as well as encouraging audiences to make multiple trips for the different versions at a time when theatres could do with that kind of cash, having three more fully-rehearsed casts available if one of them suddenly had to isolate can't hurt either
Posted by nick730 at 22:07