SPOILER ALERT: I don't spoil any twists that actually happen in the play in this review; however I do mention a couple of red herrings that don't lead to anything, so you may want to consider that if you're planning on seeing the show and want it to fully misdirect you. 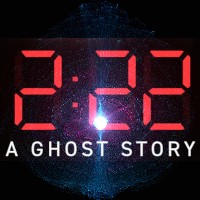 Tuesday's West End trip saw a TV show spin off to the stage; Thursday's doesn't actually do the same with a podcast (although that's bound to be on the cards next,) but it does market itself heavily on the back of one. I did in fact listen to The Battersea Poltergeist, which I found a suitably chilly accompaniment to a winter lunchtime walk around the park, but I hadn't realised quite how many others were doing the same - apparently at one point it was the most listened-to drama podcast worldwide, so it makes sense that playwright Danny Robins' new play would want to capitalise on the notoriety of a show he wrote and hosted. Especially when that play is called 2:22 A Ghost Story. New parents Jenny (Lily Allen) and Sam (Hadley Fraser) are renovating the large East London house they recently bought off an elderly widow. But for the most part Jenny has been there alone with their baby, as astronomer Sam has been working on Sark, an island noted for its clear skies with no light pollution.
A couple of nights before Sam came back, Jenny started hearing loud footsteps in the baby's room every night at 2:22am, but when her husband returns he dismisses her fears and obvious distress. Added to the stresses of a new baby and being apart so much, it causes a lot of tension for the couple. 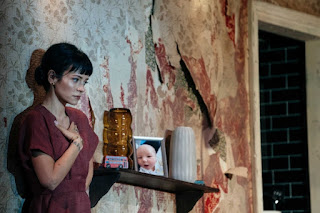 And tensions between a couple are a classic start to a dinner-party play, so they've invited Sam's old university friend Lauren (Julia Chan) along with her new boyfriend Ben (Jake Wood,) a plumber who grew up in the area long before it was gentrified. Before long the conversation has moved to Jenny's possible ghost encounter, and as much to try and prove the smug Sam wrong as anything else, the guests agree to stay until 2:22 and see what happens. Along the way they get increasingly drunk, argue over their very different beliefs and posit theories about what both this haunting and other ghost stories might really be. 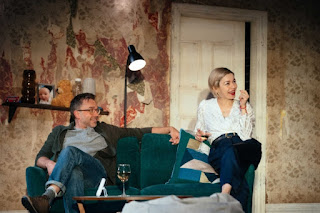 So despite its title 2:22 A Ghost Story is as much a dinner party play as it is a supernatural thriller, with clues and red herrings thrown about not just around the ghostly plotline, but also the characters' relationships and long-standing secrets. And it probably works better on that front as well, although one of its biggest problems is common to both genres: With three of the characters being to some degree or other open to the supernatural explanation, Sam, as the sole resident sceptic and rational scientist, is so insufferably smug and superior in his mansplaining that he borders on the unwatchable; when Ben asks Lauren or Jenny what they ever saw in him, all it does is hang a lantern on the show's biggest irritant. 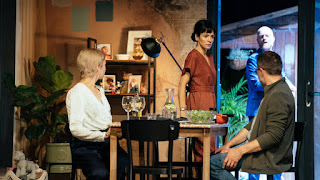 Matthew Dunster's production knows the audience is mainly there to be scared into jumping out of their seats, of course, and duly delivers - Ian Dickinson's sound design is the main instrument for this, with the shrieks of urban foxes fucking which I can confirm, from living near school playing fields full of them, are every bit as chilling when they ring out all night in real life. The regular jump-scare comes from the scene changes, which instead of music play loud horror movie screams while Lucy Carter's lighting bathes the auditorium in red. It's a self-consciously cheap, tongue-in-cheek way to get the heart racing and there's nothing wrong with that, but it does rather highlight the fact that there's not a lot of similar moments coming from the story itself. 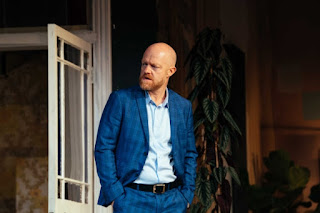 In a way I think what makes the play work as a character piece that gets the imagination going is also what holds it back as a thriller: Robins is very keen not to give away anything about whether the explanation will be natural or supernatural, and that leads to some very clever metaphors that show how long he's been thinking about ghost stories: I loved the idea of ghosts being an otherworldly Facebook, sending you reminders of past events with no filter over whether they'll be happy or downright traumatising; or the astronomer being admonished for saying you can't see something that's no longer there, when by his own admission that's what he's doing when he looks at the stars; there's a suggestion that the ghost is the house itself responding violently against gentrification, and the fact that a gruff plumber like Ben who believes in reincarnation* and was raised by a Spiritualist is a kind of living ghost of what the area used to be. 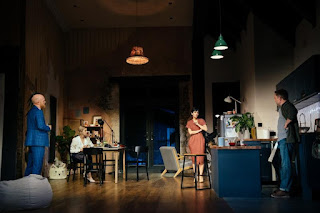 But holding the cards so close to his chest also means there's no sinister voices coming through the baby monitor (which is now such a horror trope that having it there without delivering is like not firing Chekhov's gun,) and no mysterious figures appearing behind the cast when they're all looking elsewhere (Anna Fleischle's set design does a clever job of giving a large, airy and brightly-lit room a couple of shadowy nooks and crannies where something eerie could appear; it's true that what the audience imagines tends to be scarier than anything you could show, but that only works for so long if there's no pay-off.) When the reveal eventually does come enough clues have been there for it not to completely come out of the blue so it works, but some of the red herrings along the way hinted at alternative endings that could have really sent the audience out with their hair standing on end‡. Clearly, 2:22 A Ghost Story is interesting enough to send the imagination spinning off in many directions, as evidenced by how much it's inspired me to write about it. But while it delivers a few good jump scares in the theatre, I don't think many audience members will be chilled to the bone enough to wake up at 2:22am for real.
2:22 A Ghost Story by Danny Robins is booking until the 16th of October at the Noël Coward Theatre.
Running time: 2 hours 5 minutes including interval.
Photo credit: Helen Murray.
*when Ben says he was around for the French Revolution Sam literally laughs in his face (because he's the actual worst) because it's always something dramatic like that, and not living in the suburbs in the 1980s. Which is a shit example because people who believe in reincarnation don't generally believe their past life overlapped with the current one. UNLESS THEY WERE REINCARNATED ACROSS THE MULTIVERSE AND THE TIMELINES ARE DIFFERENT OH MY GOD OK now I really want to see a play about reincarnation across the multiverse, where e.g. someone realises their past life was actually in the Tarantinoverse and they can't understand why none of the history books mention the assassination of Hitler SOMEONE WRITE THIS IMMEDIATELY
‡when mental health worker Lauren says fear is the only emotion stronger than love, and Jenny says she could never be so scared she'd leave her baby behind, there was a palpable audience response as everyone imagined the ending this might be foreshadowing
Posted by nick730 at 22:48