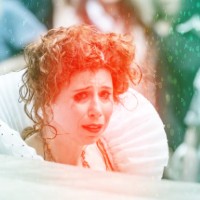 Without the new writing or more obscure revivals that sometimes take us into the autumn at Shakespeare's Globe, it's already time for my last outdoor visit of this summer season (there is one more show scheduled, but it's in the Swanamaker,) and it's the regular onstage appearance of the Artistic Director, as Michelle Terry takes on Viola in Twelfth Night. Shipwrecked on the coast of Illyria - here a scrapyard full of car parts, old neon signs, a jukebox and other clutter of 1950s Americana in Jean Chan's design - Viola makes a beeline for the local Duke, Orsino (Bryan Dick.) Disguised as a boy called Cesario, she falls for him immediately, but he's smitten with the unattainable, grieving Countess Olivia (Shona Babayemi.) When "Cesario" is sent as an envoy of Orsino's love to Olivia, the circle of unrequited love is completed when she's instantly attracted to "him."
The play's own gender-bending gets some extra twists in Sean Holmes' production with a two-thirds female cast: Victoria Elliott's Feste is ambiguously gendered, appearing at Orsino's court as a female lounge singer, but donning a chest-binder at Olivia's as a tomboy in a baseball uniform. 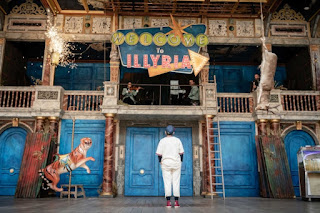 It's an interesting character choice in a production full of them, which gives every impression of being one of the more collaborative shows the Globe's ensemble tends to go for - although the theme of crumbling American nostalgia carries through to some of the costumes and James Fortune's folksy, bluesy music, there's not much of an overarching theme uniting the evening: Where the same creative team's Midsummer Night's Dream takes its Carnival theme and integrates it into every aspect of the production, here it feels like a canny choice was made about the musical style and the design was based around that without the production quite fitting on the set it's been given; there's no American accents, and I did wonder how a version might play out that genuinely explored dropping the twins off (maybe by some means other than the sea) in a remote, dusty place in the middle of America. 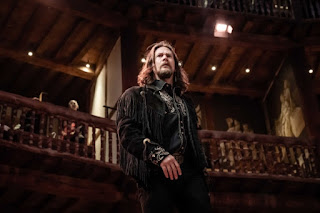 Instead there's a feel of everyone doing good work, but not always gelling with each other's interpretations. Starting at the top it doesn't hurt to have someone with Terry's stage presence as Viola: One of the most beloved Shakespearean female leads, I think she's more of a challenge on stage than she appears on the page. On many occasions I've seen her almost disappear into the background in a play she's central to, but Terry's emotional but grounded performance sets her firmly as the heart of the play. It does mean there's even more suspension of disbelief required to think anyone could mistake her for her twin Sebastian - where she's down to earth, Ciarán O'Brien plays her brother as a preposterous fop - although I mean, fair enough, whatever you can do to make that nonentity of a character register. 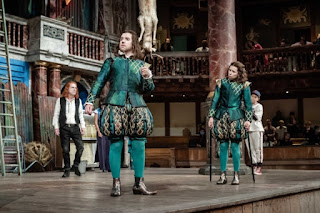 Babayemi's Olivia goes through an emotional journey that's strikingly marked out in costume and colours, moving from mourning black to vibrant red. She's quite an abrupt, stern head of the household and that does seem to affect the atmosphere of the whole subplot, everyone in her house seems on the verge of snapping at each other all the time. Which may be why Sophie Russell's Malvolio doesn't register as particularly severe. Or it may be that as a Globe veteran by now, she knows how to work the audience: Another interesting choice is that, because Nadine Higgin's Sir Toby Belch encourages the crowd to join in with the late-night revelry, Russell chooses to direct Malvolio's rants at the audience. Which of course doesn't make him the bad guy, because just like Higgin constantly spraying beer over the groundlings, one of the first rules of the Globe is that systematically abusing the audience only endears you to them more. 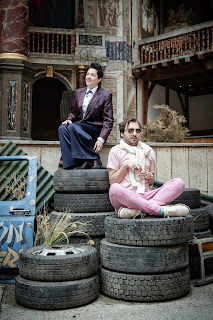 Although the setpieces, particularly the one with the fake letter to Malvolio, which has the drunks hiding around the junkyard, work well enough, this subplot doesn't always pick up steam as much as it could - although George Fouracres continues to make his case as a comic natural in this space, with his cheerfully oblivious Aguecheek an instant audience favourite. Meanwhile a character it's very unusual to even notice is Orsino's servant Valentine, but Rachel Hannah Clarke gives the role an added dimension by making him a female servant very obviously in love with her master - and watching on heartbroken as he falls first for a woman who's not interested, then for someone who as far as anyone knows is a man, all the while not noticing someone who's smitten and available right under his nose. 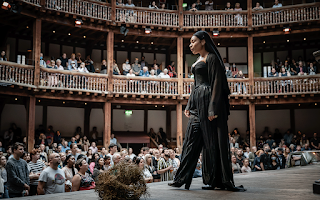 I thought this might be at the very least building to a background theme, adding Valentine to Antonio and Feste as the characters left loveless in the cold at the mix-and-match happy ending, so I was disappointed when this fizzled out. But nothing ever does really cohere as an overall vision for the play, and along with the energy not always feeling like it was quite up there, it stops this from being a truly memorable Twelfth Night. It probably doesn't help that, already the longest of this summer's interval-free shows, it started late tonight, making for quite a hefty chunk of time overall to sit on a hard bench without the prospect of a loo break. 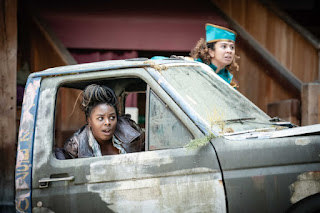 And though I don't want this to come across as an overwhelmingly negative review - the production is, for the most part, plenty of fun - I can't not mention the fact that the blocking for the production barely uses the sides of the stage either side of the onstage pillars. As a venue that's as close to being in the round as you can get without actually being in the round, at least half the audience have a side view of some kind, and both in terms of sightlines and just being engaged with as an audience I prefer productions that move around a lot and give every corner of the stage a chance. Maybe this'll come back naturally once there's groundlings hanging off three sides of the stage, but for now I'm pleased with the balance the Globe's found between the need to sell tickets and making sure everyone feels safe and relaxed to be there: Despite being an outdoor venue they've kept some social distancing in the seating, and while standing groundlings are back there's about half the usual amount, with a line keeping them at a slight distance from the stage. And while I enjoyed my chances earlier this summer to actually sit in the Yard, it's good to see the performers' favourite foil back.
Twelfth Night by William Shakespeare is booking in repertory until the 30th of October at Shakespeare's Globe.
Running time: 2 hours 45 minutes straight through.
Photo credit: Marc Brenner.
Posted by nick730 at 23:18