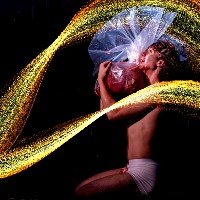 Oscar Wilde is known for extremes: The frothy comedies on one hand, the disgrace and despair of his later years on the other. Somewhere in between was his desire to add a more dramatic string to his bow, and like Racine a couple of centuries earlier he wanted to take Greek Tragedy as his starting point. His personal life having other plans, the only one of these tragedies he actually got to write was Salomé, which applies a biblical story to that format, ending up with a twisted and gory dance through the extremes of sexual obsession. And that's before you get to the added twists individual productions might have in mind: Ricky Dukes' for Lazarus Theatre isn't even the first I've seen to queer up Wilde even further, by gender-flipping the title character. King Herod (Jamie O'Neill) has, in a plot point reminiscent of another famous tragedy, had his own brother killed and married his widow, Herodias (Pauline Babula.) Apart from the obvious, the tension in their marriage is also caused by Herod's undisguised interest in her son Salomé (Fred Thomas.)
Much of the court seems similarly taken with the boy, except for the prisoner in the dungeon: Jokanaan (Prince Plockley) is an activist who spends half his time prophesying the arrival of a Messiah, the other half making attacks on Herodias. The usually bloodthirsty Herod keeps him imprisoned but is afraid to actually kill him, in case the prophet really is a holy man and harming him invites his own destruction. 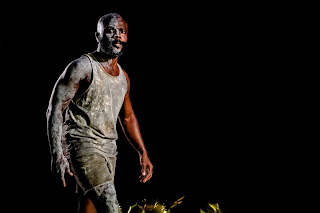 But Salomé has paid Jokanaan a visit, and was offended when the prophet failed to return his advances. When a drunk Herod swears an oath to let Salomé have anything he wants in return for an erotic dance, his stepson demands Jokanaan's head on a silver platter, and the superstitious king has accidentally committed himself to do the one thing he fears most. The play opens in a style that seems faithful to the Greek model: The Page of Herodias (George Ray-Turner) and a Young Soldier (Omi Mantri) do their Basil Exposition bit and set up the story as well as the hold Salomé has over the court; but it's not long before things take a bloody turn that sets the show off in increasingly surreal directions. 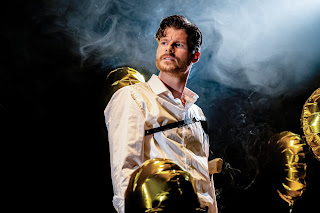 Dukes' production adapts the text a little bit beyond changing the pronouns, though not heavily: The text is still mostly Wilde's, and although for the most part the language is evocative, in a stripped-down space it does sometimes become apparent why his tragedies mostly stayed on the back burner until it was too late; whatever you think of his comedies, there's a supreme confidence in Wilde's language, whereas here if you know that he was deliberately trying to follow a classical model, it explains why some of the purple prose feels forced. As for Dukes' adaptations, the sudden bursts into modern swearing mostly work - the characters' grand language occasionally letting through the baser instincts underneath - although Herod suddenly railing against woke snowflakes definitely doesn't. 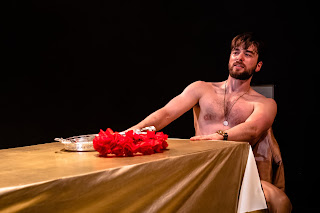 It was never likely to, as the modern-dress production is vague about the specific setting. O'Neill's performance has hints of the gangster about him, but otherwise the keynote of Sorcha Corcoran's design is gilt: Everything from the soldiers' guns to Salomé's finger and toenails are painted gold. In the early scenes especially, it becomes obvious how much Wilde's play and his characters obsess over the idea of purity. Herod and his family have spraypainted over their own impurity with a tacky layer of gold, but when confronted by anyone they consider pure the grubbier reality comes out as their immediate instinct is to corrupt it. 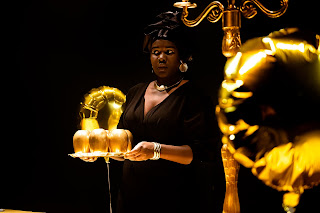 In any production of Salomé the central dance is likely to be the most memorable moment, and so it is here, although for unexpected reasons as this is where the surreal tinge to the production is let loose completely, and exactly what Herod wanted his stepson to do is revealed. I mean, no kink-shaming here if a Timothée Chalamet lookalike dressed as a Disney© princess is your thing, but it's probably fair to say the ensuing game of hide-and-seek isn't what anyone was expecting. I guess it's an extension of the play's fetishisation of purity: This is another show where the website's nudity warning isn't quite accurate, as Herod's spaffed in his pants long before Salomé has had a chance to take his own off. 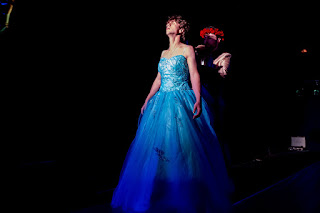 In many ways Dukes' is the most baffling Salomé I've seen, sending the audience out with a lot of confused muttering. In another sense maybe this is just a fitting way of recreating some of the extreme responses the play originally inspired, taking a familiar biblical story and giving it a dark psychosexual twist. It's another show that in some ways tries to do too much in a short time, and not all of the ideas land. It's certainly one I can see eliciting mixed responses, and I'm still not sure what I ultimately made of it, but once again we're looking at a show that fires the brain off on all cylinders trying to pick it apart.
Salomé by Oscar Wilde is booking until the 11th of September at Southwark Playhouse's Little Theatre.
Running time: 1 hour 20 minutes straight through.
Photo credit: Adam Trigg.
Posted by nick730 at 17:31