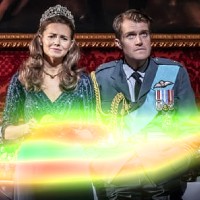 I'm not sure I like the increasing trend for popular TV sitcoms to get a West End outing and haven't been to many of them, but George Jeffrie & Bert Tyler-Moore 's The Windsors has been one of my favourite shows of recent years so I made an exception: The TV version is presumably not going to be returning following Jeffrie' s (non Covid-related) death just under a year ago, but he had managed to finish the first draft of The Windsors: Endgame with his writing partner. For those unfamiliar with the sitcom, it essentially plays the current members of the British Royal Family (minus the Queen and Prince Philip) as an overwrought soap opera, with Camilla Parker-Bowles as the overarching villain, plotting to get Charles the crown, and then grab power for herself. This stage finale sees what would happen when she finally got her way - funnily enough the broad strokes of the plot are similar to King Charles III, although this being a much sillier affair it doesn't actually kill off Elizabeth II, it just follows up on the real-life death of Prince Philip to have her abdicate in favour of Charles (Harry Enfield.)
In what, frankly, doesn't even feel like that unlikely a twist, it turns out the Brexit agreement was so hastily-written that instead of restoring Britain's legal system to pre-1973, it's actually restored it to pre-1173, meaning the king is absolute monarch again. Charles and Camilla use this to return the country to a feudal system. 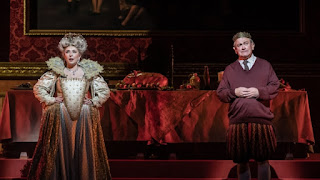 Only three-and-a-half* cast members from the TV show have come along to the stage version, and in probably the best of the attempts to tailor it to a new medium, Memorable Actor Matthew Cottle's always under-employed Prince Edward has been relegated to playing all the one-line supporting roles, as well as constantly breaking the fourth wall when a panto-like call and response is required from the audience. Tracy-Ann Oberman takes over the role of Camilla, and is the other cast member to really lean into the panto approach as a villain who hisses back when the audience boo her. It's down to the younger generation to stop her, with Ciarán Owens a suitably absurd Prince William, and there was that episode of The Windsors where Kate Middleton was a robot, so maybe that's where they got the idea to cast Kara Tointon. Crystal Condie is one of the stronger additions, though underused, as Meghan Markle opposite Tom Durant-Pritchard's Harry. 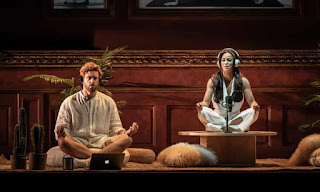 Although I prefer not to read other reviews before seeing a show, star ratings can be hard to miss and the ones for The Windsors: Endgame suggested very mixed responses. I did end up somewhat disappointed by a play which never quite reaches the brilliantly surreal comedy of the original, but it's probably also fair to say that if I hadn't come in with such high expectations I would have enjoyed it a lot on its own terms. There are a lot of good gags over the course of the evening but Michael Fentiman's production can't really match the frenetic energy of TV - except perhaps in a very well-choreographed (no fight or movement director is credited on the website) martial arts showdown between Kate and Meghan that comes pleasingly out of nowhere. 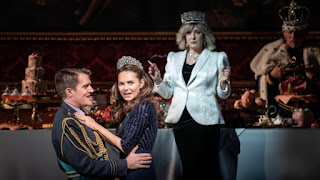 We're going to need a bigger crown
This show does, though, seem to rely more on cheap topical gags than the original, especially in the subplot about Beatrice (Jenny Rainsford) trying to defend Andrew (Tim Wallers) in a US court against the accusations that have here been discreetly dubbed Noncegate. The topical jokes of course also highlight that most of the script sadly doesn't have the full original writing team behind it, as many of the references - including major plot points - involve events that came after Jeffrie's death last September. And while the idea of making this a pantomime more or less works (and is, if anything, a bit more dignified than this family deserve given what we keep finding out about them,) the frequent musical interludes fall a lot flatter. The proscenium arch is still framed by the Book of Mormon set design, ready for this theatre's regular show to return in the autumn, which doesn't help with the feel that this is filler material for a venue that would have otherwise been dark: But while it occasionally feels that way The Windsors: Endgame does for the most part earn a couple of hours of an audience's attention - not the franchise's finest hour but not without its highlights.
The Windsors: Endgame by George Jeffrie and Bert Tyler-Moore is booking until the 9th of October at the Prince of Wales Theatre.
Running time: 1 hour 55 minutes including interval.
Photo credit: Marc Brenner.
*Tom Durant-Pritchard only played Harry in the final series
Posted by nick730 at 22:52