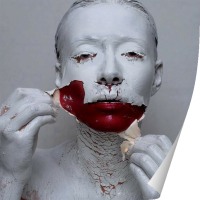 It's not the subtlest form of flirtation but if you ask a lady nicely she might get her cock out for you - although you might have to give her head in return. Yep, it's the story that's been striking dread into London's theatregoers but I'm not crazy enough to see the National's Salomé again - this time it's Stratford-upon-Avon and Oscar Wilde's one-act tragedy. But even this isn't quite the version Wilde imagined, although he'd probably have enjoyed watching it for a couple of reasons: The text is unchanged but director Owen Horsley is using it to mark the 50th anniversary of the decriminalisation of homosexuality. The online trailer for the show has the feel of a gentleman's specialist film, and Bretta Gerecke's designs immediately suggest a gay club, the kind that probably isn't too surprised or bothered if more than one person uses the same toilet cubicle.

Most obviously, though, the theme is shown by having Salomé herself played by a man - a recognition of gender fluidity that does have the unfortunate side-effect of leaving Suzanne Burden's toxic fag-hag of a Herodias as the only female cast member. 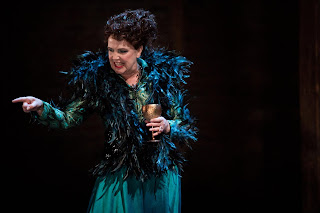 While the royal court feasts to welcome a Roman emissary, Salomé (Matthew Tennyson) escapes her step-father's leering looks by visiting the guards, where she sees their prisoner, the prophet Iokanaan (a very buff Gavin Fowler.) She lusts after him but he rebuffs her attentions, so when Herod (Matthew Pidgeon) follows her and demands a dance in return for anything she desires, she asks for the prophet's head on a silver platter. 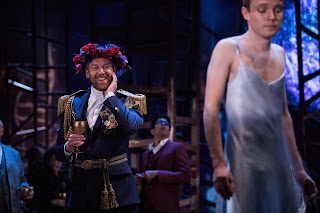 In his tragedies (of which there were meant to be more but.. some stuff happened so this remains the only one,) Wilde wanted to follow French writers like Racine, who used Greek Tragedy as a model. Salomé even has a Chorus of sorts in the Soldiers (Robert Ginty, Ben Hall, Miles Mitchell,) although they take a bit more of an active role than a traditional Chorus would when their Captain (Assad Zaman,) also obsessed with Salomé, kills himself after a premonition of doom. 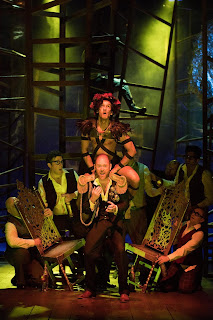 The pronouns haven't been changed and Tennyson is still playing a princess not a prince - is it overly picky to think Salomé's
FULL-FRONTAL MALE NUDITY ALERT!
isn't that convincingly Jewish, when she actually has a whole collection of objects a princess wouldn't normally have? - but the overtly gay visuals do lend a different edge to the play, giving a new meaning to Herodias' dig at Herod not having sired any children of his own. Casting Tennyson, essentially a toddler in a frock, as Salomé, makes her very much a spoilt child who will break any toy she can't play with, and whose pouty malice Herod doesn't fully appreciate until it's too late. 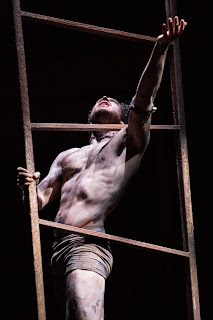 What the production is best at evoking is the sense of slight hysteria, a party that's got out of hand and is going to end badly. Although the visual design is good, the most effective element is the music by Perfume Genius, sung by Ilan Evans; I'm not really familiar with Mr Genius' oeuvre but if this dramatic, electronic rock is representative maybe I should check it out. This still comes across as an odd little play but it has an effective buildup of dread - and nary a mention of an aqueduct.

Salomé by Oscar Wilde is booking in repertory until the 6th of September at the Swan Theatre, Stratford-upon-Avon.