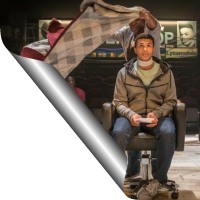 If my way home from the theatre is by bus, which includes trips back from the National, even if the show finished quite late chances are the row of black barber shops in Camberwell will still be open and doing business. Clearly there’s a cultural significance that’s built up around barber shops rather than a huge market for 10:30pm haircuts, and this is what Inua Ellams’ new comedy-drama at the Dorfman explores. Barber Shop Chronicles is made up of vignettes from barbers’ around Africa, but the central thread is set in a shop that – based on the local references the characters make – could easily be one of those in Camberwell: Three Kings Barbers was set up years ago by three friends, but only one is still working there. Emmanuel (Cyril Nri) has taken over the business after an incident between the other two we don’t hear about at first. Samuel (Fisayo Akinade) has taken over the second chair from his father, and harbours some resentment towards Emmanuel for something he believes the older man failed to do.

The third partner (Sule Rimi) is no longer welcome on the premises and has been replaced by Winston (Anthony Welsh,) who as a Jamaican observes the joking and bickering of his African colleagues and clientele with a degree of amused detachment. 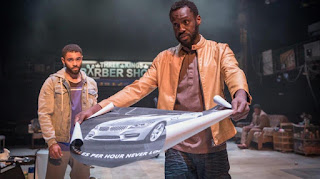 But the play opens in Lagos, Nigeria, where Tokunbo (Patrice Naiambana) is woken up at 6am to give a bleary-eyed haircut to Wallace (Hammed Animashaun,) who wants to look smart for a job interview – and promptly runs away without paying. We return to Tokunbo’s comic grumbling about his bad start to the day throughout the play, as well as to a number of other African cities, each giving their own country’s particular flavour, and all dropping hints that link their characters back to Three Kings in London. There’s mentions of relatives who we later realise we’ve met in a different shop, as well as jokes, stories and sayings (“the older a man gets, the faster he could run as a boy”) that have travelled along with the people. There’s also Chelsea FC, an unlikely unifying factor but one with fans in every shop we visit, and an international match forms the central event of the play, as men crowd around TVs in barber shops across Britain and Africa. 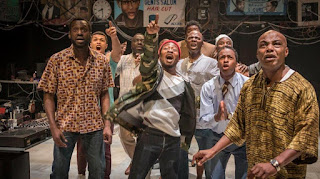 This is an all-male cast and, as seems to be a recurring theme in new plays at the moment, much of what it really concerns is fathers and sons. There’s a lot of absent fathers in the play, as well as father substitutes; even rappers and political leaders are seen as father figures, with Robert Mugabe and Nelson Mandela’s records as fathers of their respective nations put under the microscope. Ellams concludes that the barber shop as a social hub has grown up as a way for African men to figure out what their own masculinity means (the outsider Winston thinks it’s a specifically African thing because most of the nations don’t have a drinking culture – but he’s Jamaican so he’s off to the pub.) There are exceptions though and in South Africa* Naiambana (most of the cast play multiple roles) gives us one of the most moving scenes as an ageing drunk who still regrets never having had a relationship with his father, and whose relationship with his own son hasn’t worked out that well either. 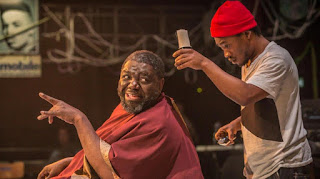 Mostly, though, Barber Shop Chronicles is about a sense of community, and Rae Smith’s design makes the in-the-round configuration of the Dorfman feel particularly intimate, cluttered as it is with ever-moving furniture, and hand-painted signs with dodgy portraits of Will Smith and Barack Obama on them. Bijan Sheibani’s production is a lot of fun, from the repeated jokes that everyone’s heard before and which get changed depending on their audience, to the running gag of Simon Manyonda’s wannabe intellectual being shut up every time he tries to speak, and the cast singing and dancing their way through the scene changes. With the Olivier currently alternating two of its worst offerings in years, and the Lyttelton more or less sold out for the summer, the Dorfman is stepping up with an alternative that offers depth and insight in a genuinely entertaining and big-hearted package.

Barber Shop Chronicles by Inua Ellams is booking until the 8th of July at the National Theatre’s Dorfman.

*there’s a reason why South Africans might drink more than the rest of the continent: They have to watch a lot of Yaël Farber shows.
Posted by nick730 at 23:01