Theatre review: The Ugly One 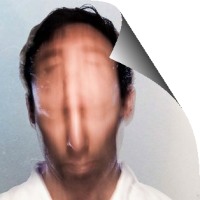 It’s nine years, almost to the day, since I saw the Royal Court’s original production of Marius von Mayenburg’s The Ugly One, and it’s a show I remember surprisingly well. This revival is directed by Roy Alexander Weise, who after last year’s The Mountaintop seems to have similar taste to me in plays from the last decade or so; and I was particularly interested to see what he did with it because the original staging is one thing that particularly stood out in my memory – because it was virtually non-existent. Well Weise hasn’t followed suit, but his production’s still comparatively minimal despite the ubiquitous video element – here it gets projected onto Loren Elstein’s raised stage floor, a sort of enormous desk that sometimes doubles as a platform for the public presentations its characters make. And public presentations are something Lette (Charlie Dorfman) isn’t allowed to make: He’s invented a revolutionary (within his industry; otherwise stultifyingly dull) new plug for car-manufacturing machinery, but his company insists his assistant Karlmann (Arian Nik) present it to customers.

When he’s baffled by this, everyone around him realises that Lette’s never noticed the most obvious thing about himself: That his face is so hideously ugly nobody in their right mind would attempt to use it to sell a product. 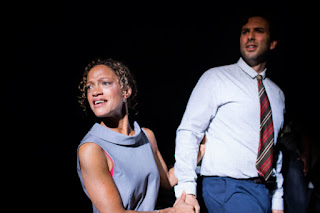 Having been going through his life happily enough Lette now becomes paranoid about his face, eventually allowing plastic surgeon Scheffler (T’Nia Miller) to completely rebuild it. He now ends up at the opposite end of the scale with a face that might well be too good-looking: Women throw themselves at him everywhere he goes, and Scheffler starts profiting by giving anyone else who wants it the same face, until Lette is surrounded by people who look exactly like him. 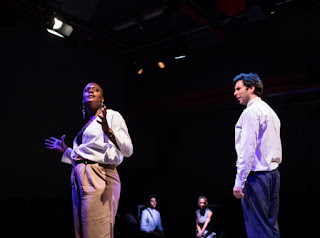 Von Mayenburg’s satire on society’s fixation with looks hits a lot of targets – in fact its hectic pace and daft plot twists make it feel like an explosion of ideas in various directions. Lette’s wife Fanny (Indra Ové) is against him getting the surgery because she fell for his personality and got used to just not looking at him; after the surgery his face becomes the most important thing about him so Fanny is happy to sleep around with his clones. Ové and Nik also double as a 70-something woman who’s also had extensive surgery, and her creepily close son, who both get obsessed with Lette. Nik is the best out of the cast at differentiating between his two characters, leading to some really dark gags working very well; Ové also flips between them well although Miller could maybe do a bit more to define her own two characters as distinct. 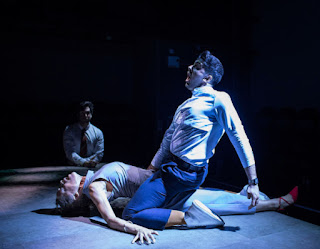 Weise’s approach is to have fun with the production, most memorably in the surgery scene where a lot of fruit turns up to represent the grisly sounds of Scheffler carving up a face (although the scene’s climax went a bit awry when a blender didn’t work.) It’s a good example of suiting the conceit to the scene and not milking it,* and overall the production is an entertaining one, although I did think it should have picked up the pace even more – it seems unusual to say about an 80-minute show, but then this is a play that usually runs at under an hour, which makes this positively leisurely. Ultimately the strength is in the script’s wild flights of fancy, which put the lie to the idea that Germans can’t do comedy.

The Ugly One by Marius Von Mayenburg in a version by Maja Zade is booking until the 24th of June at Park Theatre 90.