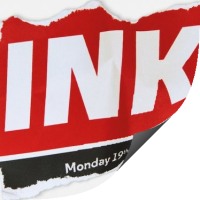 The more I think about Ink, the more overtly it seems like a take on Doctor Faustus. James Graham’s latest play – his first of three premieres over the next five months – is an origin story for the The Sun, Britain’s bestselling and most politically influential newspaper. The paper had already been running for a few years when we join the story in 1969, as an unloved stablemate of the bestselling Daily Mirror, with tiny sales figures and considered a bit of a Fleet Street joke, a job there even less in-demand than one in a local paper. Having already bought the Sunday paper News of the World, Australian businessman Rupert Murdoch (Bertie Carvel) doesn’t want his printing presses to go unused the rest of the week, and buys The Sun with a plan to turn it into a rival for The Mirror, and eventually overtake it. He courts Larry Lamb (not that one) (Richard Coyle) to be the first editor, responsible for finding that elusive mass appeal.

Murdoch and Lamb come up with an aggressively populist and irreverent approach that yields instant rewards, but Murdoch’s demand that they overtake The Mirror within a year of relaunching means that the moral codes that govern newspapers become irrelevant to them. 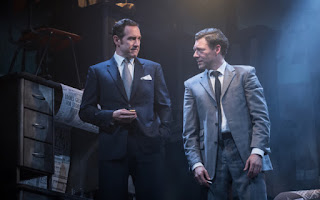 James Graham is famously even-handed, which may be one of the reasons he’s become the UK’s top political playwright. Ink isn’t an outright condemnation of The Sun and the way it’s used its influence from 1969 to today, but instead an energetic telling of the first year of its existence as a tabloid, a plucky underdog story of a tiny staff nobody else wanted to hire, but one which becomes increasingly dark as selling copies becomes the be all and end all. Certainly it’s hard not to side with them as they break Fleet Street’s more ridiculous and stuffy rules – they become the first newspaper to feature TV listings and articles, all other papers having a tacit agreement not to mention television’s existence as it’s a rival for their audience. 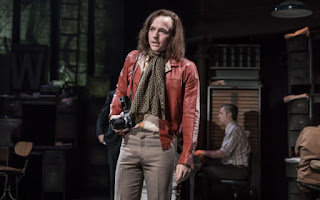 Graham has surrounded Lamb with a cast of somewhat caricatured but certainly entertaining characters, with Sophie Stanton’s women’s editor determined to give more rounded content in her part of the paper than just knitting patterns and recipes, and Jack Holden’s photographer Beverley constantly undermining his own attempts to present himself as a suave man of the world. The most consistent laughs belong to Tim Steed as Bernard, the deputy editor who’s the stuffiest member of the new team, so staid he nearly has a fit at the angle of italics but capable of wild enthusiasm at the idea of putting the weather on Page 2 – because their readers are British, and the weather is the thing they’re most interested in. 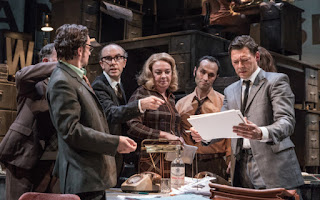 Rupert Goold has brought back something of the style of ENRON for Ink, a frantic mix of music (Adam Cork) and dance (Lynne Page) that jog the action along – although it’s of course more era-appropriate, more saucy seaside postcard hijinks than neon and velociraptors: Bunny Christie’s set is one of the undoubted stars of the show, a dusty mountain of desks that the cast disappear in and out of, appearing on different levels and climbing around in search of the next scoop, while the back walls are covered with projection screens that show the latest headlines. There’s a definite big-budget feel to the whole production that means I wouldn’t be surprised if it had been earmarked for a transfer all along. 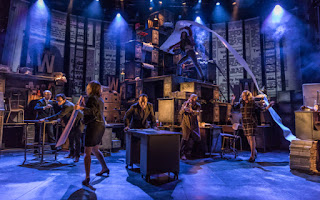 The second act isn’t as satisfying as the first, partly because it’s got an awkward structure, split as it is between two major subplots that take the story, and the paper, in a darker direction: First we have the kidnap and murder of Muriel McKay (Stanton,) the wife of Murdoch’s business partner Sir Alick (Geoffrey Freshwater.) The paper’s insistence on covering a story this close to home is blamed for the failure to save Muriel, the first of many occasions of The Sun getting blood on its hands. Although in its impact on the view of women for decades later Page 3 is an equally dark blot on the paper, going from an actual murder to the story of convincing model Stephanie Rahn (Pearl Chanda) to pose topless in a “family” paper is an unconvincing tonal shift, and overall the play feels like it could have done with being 10-15 minutes shorter to really keep its pace going. 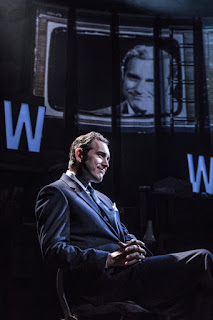 Carvel may be the one of the main star names and his character the most famous one, but Murdoch is kept both literally and metaphorically in the shadows, Carvel playing him softly-spoken with his head permanently tilted to one side, an enigmatic awkwardness that could be shyness or could just be his belief in the ultimate importance of the market making him completely uninterested in any real engagement with other human beings. There’s always a sinister undertone to any apparent friendliness; he insists telling Lamb to overtake The Mirror’s sales figures within a year is a joke, but it seems obvious it’s really an order, a target to be missed at his peril. 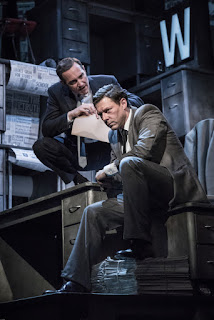 This is where the idea of him as a Mephistophelean figure who tempts Lamb – much as he does the readers – with a vision of working-class power that really just means more power for him runs through the production. But I do wonder if this isn’t just a recurring theme but the ultimate point: In the end Murdoch is well on course to become an insidious figure way beyond what Lamb is comfortable with, but it’s Lamb who taught him how to push the envelope and let the genie out of the bottle in the process. 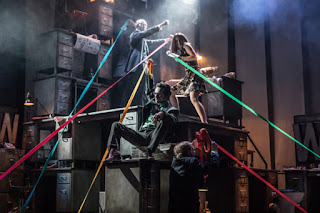 In a way what Ink has to say about The Sun will depend on what your preconceptions of the paper already were – concentrating as it does on the first year it doesn’t touch on the way it used its popularity to swing British politics to Murdoch’s personal liking, but it’s hard not to see an irony in Murdoch tempting Lamb with a story about The Mirror’s editors attempting a political coup, when eventually one of The Sun’s trademarks would become its openly boasting that it decides the election results. Following the most recent election Graham’s play has been seen as a timely look back at how that influence began, at the point when it finally seems to be waning; maybe I’m a pessimist but I wouldn’t write off what it can do just yet.

Ink by James Graham is booking until the 5th of August at the Almeida Theatre.