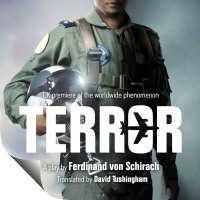 Billed as international event theatre and certainly designed as such, Ferdinand von Schirach's Terror has played over 1000 performances in Germany and been seen in numerous countries, with the Lyric Hammersmith now giving it its UK premiere in David Tushingham's translation. It's a courtroom drama with the audience serving as jury on an ever-topical case involving terrorism: A passenger plane carrying 164 civilians was hijacked, with it looking increasingly likely it would crash into a stadium filled to its 70,000 capacity. A hastily drafted and redrafted law allows for the plane to be shot down to save the majority, but as it stands only the Minister for Defence can give the order, and he refuses to do so. Faced with the reality, fighter pilot Lars Koch (Ashley Zhangazha) took it upon himself to sacrifice the plane and save the 70,000. Having gone against orders, he's now charged with mass murder and faces life in prison.

This is essentially a question of morality over the literal letter of the law as Koch has not denied what he's done, it's only whether it should strictly be considered murder that's really up for discussion. 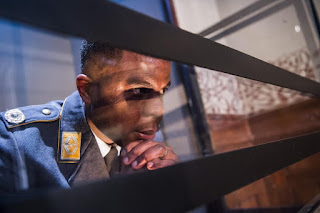 What struck me as ironic about Sean Holmes' production was how it both conforms to some German stereotypes and confounds others; the naturalistic production on Anna Fleischle's set of an imposing but generic room in a government building goes against the expressionism you'd expect from German theatre, but the precise and unemotional efficiency of proceedings totally fits other preconceptions about the Germans - I loved the impatient, clipped demands for very detailed facts from Tanya Moodie's Presiding Judge, so snippy she bordered on being like one of the eccentric judges from The Good Wife. 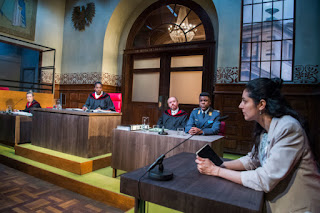 In a two-hour show the interval comes after 90 minutes, which makes sense in context: After the trial, the interval is time to discuss the case, and in the final 10 minutes the audience votes - with keypads attached to the seats - and we get the verdict on whether Koch is guilty or not*. von Schirach's play is interesting and certainly does inspire debate as intended, it was obvious throughout the interval that everyone was talking about it; but it's also frustrating. Forbes Masson's Defence Counsel plays slightly more to the emotions, but Prosecutor Nelson's (Emma Fielding) case is so coldly intellectual as to be self-defeating; indeed, after a prosecution that's largely relied on Immanuel Kant quotes, her closing statement concludes that philosphical arguments don't apply to the case. From a purely legal standpoint Koch is guilty (although after the verdict is given, the Judge enlightens us on a quirk of German law that might have made a difference to my point of view on that,) but Nelson's constantly missing open goals muddies the waters a lot more than the defence's attempts (why does she spend time confirming that Koch's superior [John Lightbody] thinks anyone else would have done the same thing? Doesn't it weaken her case that Koch specifically was wrong?) 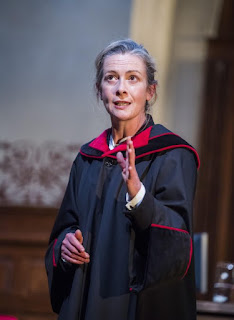 And despite the testimony of the widow (Shanaya Rafaat) of a passenger on the flight, the play retains a clinical, unemotional view of events which leaves this only partly satisfying - the debate it inspires is more heated than the emotions. It has the intended effect of getting the audience discussing it from an intellectual point of view, but I don't think it engages the heart enough to remain memorable for too long.

Terror by Ferdinand von Schirach in a version by David Tushingham is booking until the 15th of July at the Lyric Hammersmith.

*this site tracks the international results; at the performance I saw the vote was Not Guilty, and at time of writing that's been the result at every UK performance, although there was only about 20 votes in it tonight so that could change.
Posted by nick730 at 22:52