Theatre review:
Once Upon A Time in Nazi Occupied Tunisia 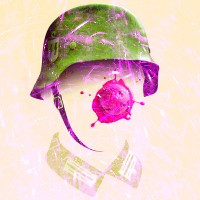 It's not often the main focus of war movies or other popular culture, so I'm probably not alone in finding where Africa fits into the Second World War something of a blind spot. If German officer Grandma (Adrian Edmondson) is to be believed, it was seen as a backwater during the War as well: He says the most promising Nazis are kept in Europe, and only the "animals" are sent to Africa where nobody's paying much attention to what they might get up to. Josh Azouz' Once Upon A Time in Nazi Occupied Tunisia takes place in 1942, when officers like Grandma and his henchman Little Fella* (Daniel Rainford) presided over a somewhat precarious occupation: Their defeat of the hated French gave them some degree of sympathy with the Arab locals, but while there wasn't much resistance to the persecution of Jews in Tunis, neither did they find the enthusiastic allies they hoped for - perhaps because, under the Nazis' rhetoric supporting an independent nation, many knew that once they were done with the Jews, the Muslims would likely be next.
At the centre of his sometimes darkly comic thriller Azouz places two couples, whose different religions haven't kept them from being friends until now: Victor (Pierro Niel-Mee) and Loys (Yasmin Paige) are Jewish, and while for the moment local Jewish women are (officially) being left alone, men like Victor have been forced into labour camps in the desert. 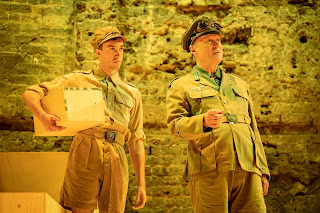 Their friends Faiza (Laura Hanna) and Youssef (Ethan Kai) are Muslim, and while the Germans are still forced to stay on their good side Youssef's been offered a job guarding the very camp Victor is in; it amuses the Nazis to make him abuse and humiliate his friend, but when Grandma tricks Victor into giving him Loys' address, Youssef helps him escape so they can warn her. Although a bit wobbly in its structure - the play opens midway through the story then jumps back to show us the two couples' past relationship; the jump from peril back to their normal lives makes the latter feel a bit too banal, plus it's unlucky timing for the play to premiere just as there's a backlash against the overuse of this device - the first act is for the most part gripping. 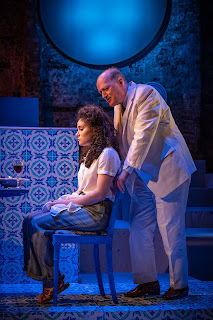 Eleanor Rhode's production is strongest in the thriller element of the last scene before the interval, as Grandma beats the men to Loys' home, and she's stuck alone with a sinister officer demanding his dinner and who knows what else, while it becomes increasingly apparent she might have a risky plan in mind to deal with him. The second act is a bit wobblier as the tonal changes in the play become more jarring: Azouz possibly intends for there to be an element of the surreal in how discussions of politics, or the barely-secret affair between Loys and Youssef, encroach on the characters trying to flee for their lives. But even if the audience didn't know what the Nazis were capable of doing to Jews the play regularly reminds us, so the fact that they prioritise arguments over getting to safety is distracting, and the tone never shifts quite far enough into the absurd to make this work. 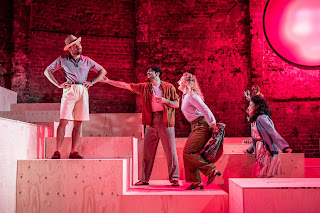 The play's ultimate theme is about different types of colonialism that echo down to the present day - the French in Tunisia, then the Germans in Tunisia, and finally Victor hoping to flee to Jerusalem, despite Yousseff's arguments on behalf of the Palestinians who would be displaced; it does bring coherence to the play's themes, but again in a play that feels like it has attention span issues it comes abruptly in a 15-minute diversion in the middle of the second act. Hanna also has something of a thankless role, as Faiza is less fully-rounded than her peers and sort of drops out of the picture after a while. 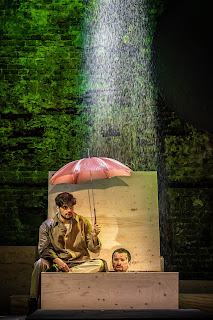 But on the plus side those other three roles are well-realised and likeably performed by Paige, Niel-Mee and Kai, who give them a believability that grounds the more implausible elements of the plot. Proving once again that a comic actor can be your best bet for a dramatic role, there's something frighteningly plausible about Edmondson's sociopathic Grandma, a jolly, joking façade that you really don't want to see beneath. Max Johns' design is another hit, a cascade of MDF boxes like a cubist sand desert, opening up and slotting together to reveal different surprises, while Jess Bernberg's lighting takes advantage of the pale wood to turn it different colours for the play's shifting moods. The play's complex relationships and ambitious tonal shifts don't quite come off, but in terms of giving a picture of the convoluted political balance in Tunisia at the time while entertaining in the process, it's very successful.
Once Upon A Time in Nazi Occupied Tunisia by Josh Azouz is booking until the 18th of September at the Almeida Theatre.
Running time: 2 hours 30 minutes including interval.
Photo credit: Marc Brenner.
*the play uses real nicknames chosen by SS officers in Tunisia; away from the heart of the propaganda machine and on a mision that wasn't yielding the hoped-for results, they were perhaps a bit more aware of the possibility that Germany might lose the war, so insisted on being known only by nicknames so they'd be harder to track down for their crimes
Posted by nick730 at 23:23