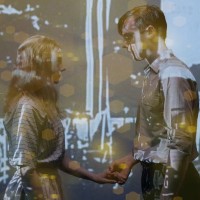 The Old Vic's latest show is to a great degree being sold as the opportunity to see a pair of the most promising young British* actors on stage together before their careers go stellar, although for London theatre regulars Patsy Ferran and Luke Thallon have been star names for a while (Future Dame Patsy Ferran's even got the Olivier to back it up.) They play the nameless teenagers spending the summer at Camp Siegfried in Bess Wohl's play inspired by a real Long Island summer camp of the 1930s. Named after the Wagnerian hero and aimed at American families of German extraction, it targeted young people still being made fun of for Germany losing the First World War, and aimed to use that sense of victimhood to indoctrinate them into Nazi ideology. But as the play opens at the start of summer the camp's more sinister purpose is very far in the background, as Thallon''s cocky Him spots Ferran's awkward newcomer Her at a dance, and they try to flirt over the sound of an oompah band.
What follows is largely framed as a teen romantic comedy with a sour undercurrent of the camp's true purpose, and the way it affects both the characters and their relationship. And if the plot sounds like a 90-minute adaptation of "Sixteen Going on Seventeen" from The Sound of Music, it's a similarity Wohl's play acknowledges in the characters' respective ages, but also undercuts in some ways. 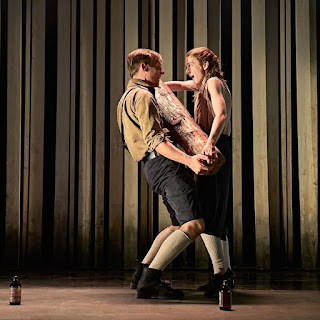 At this point some people would make some reference to the fact that Luke Thallon's got wood.
Obviously I'm far too mature to even mention such a thing.
Having two actors carry a play in a space as vast as the Old Vic is a big ask, and as a big fan of both Ferran and Thallon I wasn't surprised to see that they're well up to the task: They look perfectly comfortable on the large, almost-empty stage and you get the sense of some pretty delicate mood shifts and teenage emotional turmoil. Whether this is the right play for them to do it in is a different story - this is at its heart a quietly heartbreaking story that could have used more intimacy†. A series of one-to-one conversations don't give Katy Rudd's production much physical momentum, and Rosanna Vize's simple set sometimes serves as little more than a screen for video designer Tal Rosner to project sinister newsreel footage from the time. 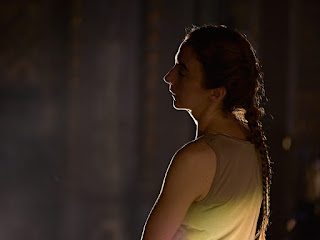 But if Camp Siegfied hasn't quite landed on the right stage there's still a lot to be impressed by, not least of all the way its story defied my expectations: Most stories of this sort tend to pan out like The Sound of Music does, with the couple eventually being split up by one of them enthusiastically embracing the fascist ideology and the other taking a stand to reject it, but Wohl does something subtler: We see how both flirt with what the camp promotes - Him has been before and begins the play casually singing Hitler's praises, while the more intelligent Her is still drawn in when the camp makes the lifelong outsider finally feel included in something. But framing this as a romance shows how both are conflicted in so much about becoming adults, and the play's biggest condemnation of the camp is in the way it cynically exploits both teenage minds and bodies. 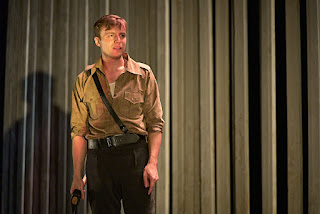 Because the most shocking revelation is that Camp Siegfried isn't just a breeding ground for Nazis in a metaphorical sense: The camp's open secret is soon acknowledged, that they're deliberately bringing hormonal teenagers of the same ethnic background together and getting them drunk to create more of the "master race," and the girls are soon in a competition over who will get pregnant first. It adds both a different pressure to the fledgling relationship and a new layer of how the young people are being exploited in the name of their own supposed superior destiny. 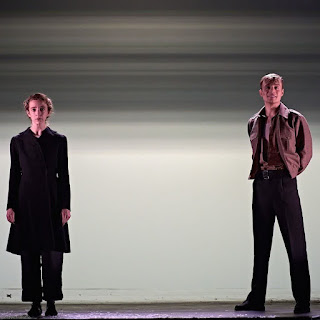 The play hits all the notes you'd expect it to - like the digs at history repeating itself in recent decades' politics - but does so in a fairly understated fashion (it's never explicitly stated that a family who are kind to Her are Jewish.) In many ways putting the politics on the back burner makes it more stark. At its heart this is a bitterwseet romance whose light comedy and dramatic turns come from the usual teenage tropes, and whose darker humour comes from the context (Him is staying in a bungalow on the corner of Hitler and Goebbels.) It means by the end the audience care more about them than their elders, who sell them stories of their own exceptionalism to turn them into brood mares and cannon fodder. Camp Siegfried is largely a star-making vehicle for its cast, who I'm sure will be (rightly) lauded for it; but a venue a bit more suited to the story's intimacy might have served the play's own strengths better.
Camp Siegfried by Bess Wohl is booking until the 30th of October at the Old Vic.
Running time: 1 hour 35 minutes straight through.
Photo credit: Manuel Harlan.
*well she's Spanish and he's French but don't tell anyone, the production might be shut down for not being British enough
†more than once I thought that in 25 years this'll get a very well-received revival at the Finborough
Posted by nick730 at 22:21