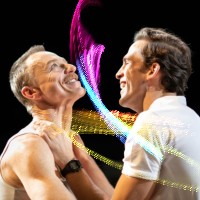 A couple of years ago the National Theatre scored one of the biggest hits of the RuNo era with its revival of the iconic American AIDS play, Angels in America. Now the reconfigured Olivier plays host to an earlier work that it's probably safe to say is the seminal work of the genre. First seen in 1985, Larry Kramer's The Normal Heart never actually mentions AIDS - not out of any artistic choice, but because we're dealing with a time when the authorities were loath to admit there even was a disease that seemed to be targeting New York's gay men, let alone give it a name. Far from the magical realism of Tony Kushner's epic, Kramer's play deals very much with the down-to-earth. And while Vicki Mortimer's set is dominated by a memorial eternal flame for the victims, and the play is far from short on heartbreak, the main emotion is anger and frustration at a bureaucratic brick wall; one that seems increasingly purpose-built to help purge Reagan's America of a population it would rather see the back of.
In a highly autobiographical play, Kramer's alter ego is Ned Weeks (Ben Daniels,) a Jewish writer who discovers that Dachau opened nearly a decade before the rest of the world acknowledged what the Nazis were doing, and sees a frightening parallel between the Jews being quietly allowed to die in 1933, and gay men being quietly allowed to die in 1981. 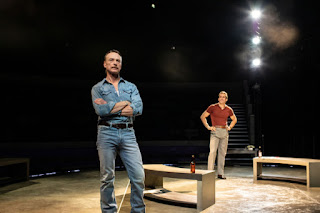 Determined not to let history repeat itself, he becomes a founder of an advocacy organisation based on the real life Gay Men's Health Crisis, along with his friends Mickey (Daniel Monks,) Tommy (Danny Lee Wynter,) and Bruce (Luke Norris.) The latter is elected president because his good looks and charisma will make him a strong figurehead, but the fact that he's in the closet at work and doesn't want to do anything too high-profile immediately makes these advantages pointless. It sets up one of the crucial conflicts in the way they want to run the organisation: Ned wants an aggressive approach that forces the rest of the world to pay attention, while the rest favour a softly-softly focus on getting the gay community mobilised and raising research funding. 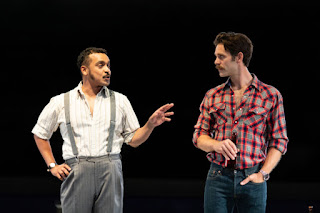 Sex is the other battleground, as despite having frustratingly little information on the disease she's identified, Dr Emma Brookner (Liz Carr) strongly suspects it's sexually transmitted. But after decades of campaigning for their rights on the back of the sexual revolution, many gay men see promiscuity as the keystone of their identity, and Ned's dire warnings to stop having sex fall on deaf ears. In a powerhouse central performance by Daniels, Ned is a complex avatar and one whom Kramer said he made deliberately obnoxious: With the benefit of hindsight it's hard not to judge him as being right on pretty much everything, and his passion powers the play. But the writer's also highly self-critical of how he went about it - his takedown of the mayor's closeted assistant (Richard Cant) might be an entertainingly triumphant moment, but it leads to the group losing the chance at any funding or attention from the city. And he remains wilfully blind to the way his "anti-sex" crusade is giving him a puritanical reputation, and probably ends up having the opposite effect to the one intended. 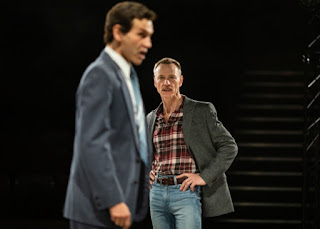 We're nearing the end of the Olivier's temporary in-the-round configuration, and in many respects I'll miss it (and wouldn't be entirely surprised to see it return from time to time even when not needed for social distancing.) What the auditorium loses in spectacle it gains in intimacy, even from the back of the Circle. It's not exactly something the Olivier is usually known for, and it helps give a more emotional touch to Dominic Cooke's production. And while much of the play's depiction of the disease's impact comes from the seemingly endless list of the latest of Ned's friends to die, there's also a more tangible story in Felix (Dino Fetscher,) the journalist Ned starts dating only to have him quickly fall ill as well. It gives him both a more personal impetus in his fight, and added guilt over the battles he can't win. 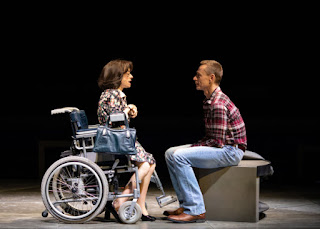 The opening production for Cooke's new production company, the occasion this production of The Normal Heart officially marks is 35 years since the play's London premiere, but inevitably staging a play about a pandemic at the tail end of the latest one brings with it a slightly different angle for the audience. On the one hand, there's an ironic familiarity to the scenes of characters sharing rumours and conspiracy theories about the disease, and questioning the official line. On the other, barely a year after Covid-19 was first identified, multiple vaccines were announced, a stark contrast to the years ticking away from 1981 to 1984 in the play, and the US medical authorities fudging over whether there even was a disease since it was mainly killing gay men and Africans, never mind trying to cure it (Kramer suggests they only took an interest when it looked like the French were about to discover its cause through HIV, and jumped in to steal the credit.) 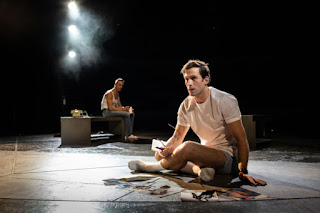 The Normal Heart premiered a little before the death of Rock Hudson, widely considered to be the event that made it impossible for America to ignore the AIDS crisis any longer. So its first audiences will have still felt a lot of the uncertainty of being ignored and left to die. Nowadays treatments have advanced to the point where you could almost forget it ever happened in the West, so it's probably no coincidence that gay creatives have been focusing on reminding people, whether with revivals like this and Angels in America, or new work like It's a Sin and Cruise. This is a well-judged, thoughtful revival with a few moments of much-needed light relief (often provided by Wynter's self-styled Southern Belle Tommy,) that fits well into this recent trend. 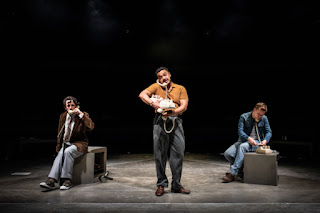 And this new body of work reflecting on what dominated gay life at the end of the last century, in its way vindicates one of Kramer's secondary concerns within the play, when he reels off a list of significant queer figures from history, many of whom were at the time forgotten or had had their sexuality erased: He may regret the unintentionally puritanical way in which he tried to fight the dangers of unprotected sex, but the writer and his onstage avatar feel strongly about gay culture being defined by more than just sex. The genre of writing The Normal Heart heralded may be a very dark one, but it's a significant building block in a wider queer society and culture.
The Normal Heart by Larry Kramer is booking until the 6th of November at the National Theatre's Olivier.
Running time: 2 hours 50 minutes including interval.
Photo credit: Helen Maybanks.
Posted by nick730 at 23:23