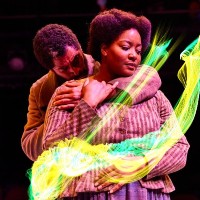 Winsome Pinnock's Rockets and Blue Lights takes its title from a JMW Turner painting, but its subject revolves around a different one of the painter's seascapes, unveiled in the same year and possibly a kind of companion piece: Best-known as The Slave Ship, it shows the aftermath of a slave ship (possibly the Zong) jettisoning its human "cargo" in a storm. It was part of the backlash against slavery that led to abolition in British territories, and the painting and its ambiguities - is Turner's not showing the bodies of the victims letting the viewer off the hook, or forcing them to imagine horrors he can't satisfactorily put to canvas? - becomes a recurring symbol, and a starting-off point for trying to reframe the narrative: Instead of making abolition a cause for self-congratulation, looking at the legacy of slavery both at the time and down the generations.
So yes, this is definitely a play with epic ambitions, and though most of the story is set in the 19th century, it has multiple levels of 21st century framing devices, beginning with two present-day Black British women looking at the painting: Teacher Essie (Rochelle Rose) takes a sympathetic view of Turner's intentions, but actress Lou (Kiza Deen) is more cynical. 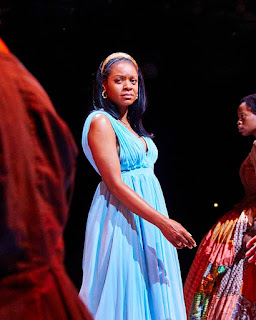 This may be in part because she's recently had a bad experience in a film about Turner and the painting; although she's ended up award-nominated for it, she's angry that the script's emphasis on her character - a survivor of the Zong massacre - was diluted by the time it came round to filming, to focus instead on a white saviour narrative and make her character a literal ghost. On top of these differing views of what the painting means and why he painted it, Pinnock gives us her own imagined version of its history: Turner (Lloyd Hutchinson read in the role tonight on short notice, as Paul Bradley was indisposed,) at this point already a famous artist, has a hankering for an adventure at sea, and joins a merchant ship in disguise. This is where his story intersects with that of a free black family living in London. 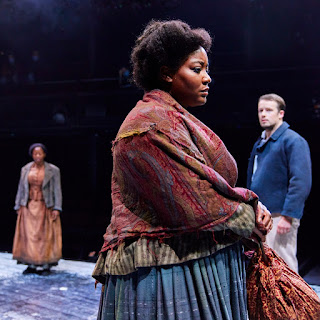 Thomas (Karl Collins) bought his wife Lucy's (Rose) freedom, so she and their daughter Jeanie (Kudzai Sitima) are superstitious about him going to sea, particularly when they discover the vessel is a former slave ship that's been converted, but still has eerie vestiges of its past such as handcuffs in the hold. For the most part the first act focuses on this period drama, as Thomas' voyage goes into sinister thriller territory, but we also see some of Lou's experience on the film, as she vents to her new boyfriend (Luke Wilson) about her control of the role slipping away from her. But after the interval the dreamlike elements that have occasionally popped up in Miranda Cromwell's production - Turner's mother (Cathy Tyson) appears to him as a mermaid - become more pronounced, and characters from different centuries start haunting each other. 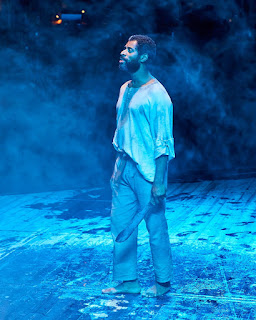 Needless to say the play features harrowing scenes and stories, but much of what Pinnock has to say is about how those stories are told, and whether there are better ways: Lou describes movie scenes of slaves being whipped as little more than torture porn, so when the time comes for her to shoot her own similar scene for the movie, Deen and Matthew Seadon-Young deliver something more expressionistic. And much like the play taking its name not from the painting itself but from its much less bleak companion piece, it balances confronting the harsh realities of slavery and its legacy centuries down the line, with the characters' determination to move forward into a brighter future. 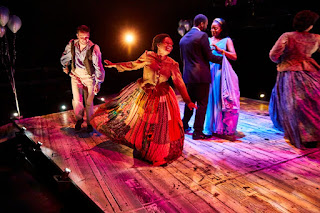 The multiple plotlines and increasing move into magic realism are risky but (with the exception of the framing device about Essie's class trip, which never felt as well-integrated as the other stories) I thought they came off. It helps that Pinnock loads the second act with quotes from Shakespeare's most famous storm scenes, which together with Laura Hopkins' deceptively simple, gradually flooding set, gives the feeling of the storylines swirling like the sea in a storm. It's certainly an interesting attempt to mix harsh reality and something more mystical (the many sea-gods who get a namecheck are another running theme) and if the play was a painting it would be one that doesn't quite cohere when first seen as a whole, but which has individual explosive colours that stand out as you take in the details.
Rockets and Blue Lights by Winsome Pinnock is booking until the 9th of October at the National Theatre's Dorfman.
Running time: 2 hours 30 minutes including interval.
Photo credit: Brinkhoff-Moegenburg.
Posted by nick730 at 23:31