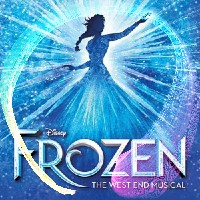 In what will with any luck be the start of me regularly going to the theatre with actual, human friends again, it's a twice-postponed trip with my resident Disney© queens Phill and Alex, and third time lucky takes us to the refurbished* Theatre Royal Drury Lane for Frozen. The wildly popular, very loose adaptation of The Snow Queen comes to the stage in a production directed by Michael Grandage and designed by Christopher Oram, but the look and feel of Jennifer Lee (book,) Kristen Anderson-Lopez and Robert Lopez' (music and lyrics) show never strays too far from the original movie. Understandably so - the film and its signature song are notoriously like catnip to little girls, so this probably isn't the show to get all experimental with†". Elsa (Samantha Barks) is heir to the throne of the Scandinavian-inspired kingdom of Arendelle, but since her parents' death she's been a recluse, even from her beloved younger sister Anna (Stephanie McKeon.)
This is because Elsa hides a magical power to create snow and ice, but has no control over it, and it once nearly killed Anna. She has no choice but to open the castle on the day of her coronation, but her worst fears come true: Her power is revealed, she's attacked as a witch, and in her panic turns Arandelle to a land of permanent winter. 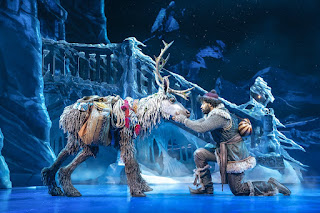 Elsa is the film's iconic character, running away to build a new ice palace in the mountains for her own and everyone else's protection, but it's Anna who carries the story, going on a dangerous quest to find her sister and convince her she can learn to control her powers and live amongst people again. Like, I would have thought, most of the audience, I've seen the original animated film, although I'm guessing I might be in a minority for having only seen it once, but I could tell the stage version stays pretty faithful, in some ways positively, in others to its detriment: There's been some thought put into making this an all-out musical, with the addition of enough musical numbers that it's almost sung-through; I did think, though, this dragged out the lengthy setup of the sisters' childhood and the buildup to the disastrous coronation, and in the first act I got impatient at what feels like over half an hour of prologue. 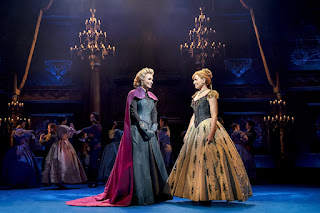 The show has a lot of fun once it gets into the main plot though, introducing Anna's competing love interests Prince Hans (Oliver Ormson) and ice-seller Kristoff (Obioma Ugoala,) and the scene-stealing supporting characters: Puppet designer Michael Curry has gone for the same approach he used on The Lion King of just using whatever kind of puppet works best for each creature design rather than imposing an overall style. So reindeer Sven is played by an actor in a full body costume (Ashley Birchall, alternating with Mikayla Jade, presumably because crawling on stilts eight times a week could cause permanent back damage if just one actor did it,) while living snowman Olaf (Craig Gallivan) is perched on the actor's feet and openly controlled by him. 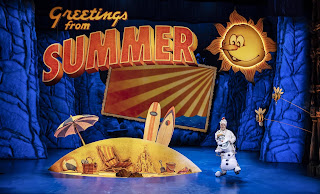 Oram clearly had a remit not to stray too far from the film's designs, especially where costumes were concerned, and given how many of the audience had turned up dressed as Anna and Elsa‡ that makes sense, although it's not without pitfalls: Tonight there was a wardrobe malfunction during Elsa's big costume reveal, the coronation dress falling off her to reveal a blue one, and disappearing into the stage. Unfortunately it didn't quite disconnect so Barks got hoiked down after it and onto her arse in the middle of "Let It Go." Fortunately she didn't seem hurt, and got up and straight back into the song to much applause. 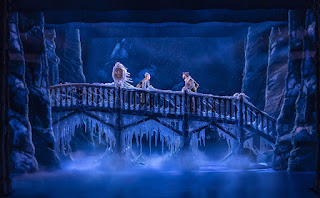 There are a few opportunities to give the show its own identity, and I'm not saying it's obvious there's a gay director/designer team, but the "hidden folk" have been redesigned from trolls into fairy-like creatures to make sure the male ensemble can get their shirts off even in a show set in permanent winter (to say nothing of the Act 2 opening number "Hygge" taking place largely in a sauna.) I could have done with some changes to the character of Hans to make his last-minute personality change make sense§ but I can appreciate I'm not the target audience, and this is aimed at people who know what they want to see. And while I'm someone who's happy to have as little dealing with children as humanly possible, as a theatre fan I do love a show where you can sense kids falling in love with theatre and the tools it uses to suspend disbelief. Whether it's Oram's spectacular sets giving Anna and Kristoff a perilous bridge to traverse, Neil Austin's lighting and Finn Ross' video making the stage freeze over, or yes, even Elsa's glove flying away on an obvious wire that made Alex cackle, the moments that make a young audience gasp make Frozen earn its place on the stage.
Frozen by Kristen Anderson-Lopez, Robert Lopez and Jennifer Lee is booking until the 26th of June 2022 at the Theatre Royal Drury Lane.
Running time: 2 hours 25 minutes including interval.
Photo credit: Johan Persson.
*they're so proud of the new paint job they're even letting the people in the Balcony see the foyer on the way up, rather than shunting us up a fire escape like usual
†"but if Disney© feel like sending their massively reworked Hunchback of Notre Dame over some time, I'd be well up for that
‡but enough about Alex and Phill
§it feels like a last-minute script change to make up for the lack of a clear villain in the film, and it feels the same here
Posted by nick730 at 22:22