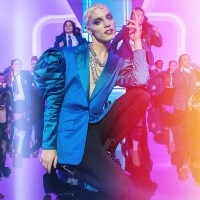 I loved Everybody's Talking About Jamie when it first transferred to London, but I did worry how long it would last without star names attached. As it turns out, it eventually took a pandemic to knock it off the West End stage, and while its recent return to the Apollo was short, its London run is officially only "paused," while a UK tour goes on, and a North American premiere is on the cards. And then there's this from the original creative team of writers Dan Gillespie Sells (music) and Tom MacRae (book and lyrics,) director Jonathan Butterell and choreographer Kate Prince, who've decided to turn it into something incredibly rare and precious: A movie musical without James Corden in it. There's a new, slightly starrier cast taking on the central roles, although a few of the original stage performers get cameo appearances, as do Jamie and Margaret Campbell, the story's original inspiration.
So Max Harwood makes a confident debut as Jamie New, who's just turned 16 and, unlike most of his classmates, has a pretty concrete idea of what he wants to do with his life: He wants to be a drag queen. 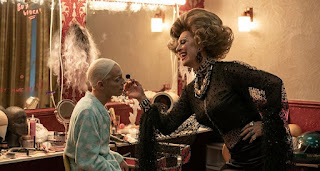 The main thrust of the story sees him decide to turn up to his class prom in drag, and prepare with new mentor Hugo/Loco Chanelle (Richard E. Grant) to publicly debut his new persona. But there's also a number of more emotional arcs running through the story, like his absent father (Ralph Ineson) having essentially decided to ignore his existence, and his mother Margaret's (Sarah Lancashire) heroic efforts to stop her son from realising this. Also present and correct are Margaret's wisecracking best friend Ray (Shobna Gulati,) Miss Hedge (Sharon Horgan,) the teacher whose attempts to keep her students' ambitions realistic tip over into crushing their spirits, the (slightly more developed as a character than in the stage version) bully Dean (Samuel Bottomley,) and a parallel bit of character development as Jamie's best friend Pritti (Lauren Patel) remains one of his biggest supporters, but also learns to step out of his shadow and stand up for herself. 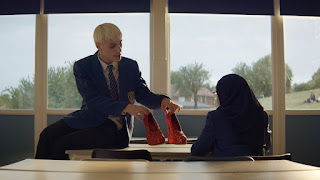 So the story is largely unchanged*, as are the more memorable songs - a few of the stage numbers have been dropped, a couple of new ones have been added to the soundtrack, while the most notable change is in Hugo's big number: The characters breaking out into song is largely presented as daydreams, but even so "The Legend of Loco Chanelle," with its story of Hugo's drag persona committing a crime of passion that dyes her white dress red, might have been an awkward tonal change. Instead we get something more literal and introspective, with Holly Johnson taking the lead (the rest of the cast all provide their own vocals) on "This Was Me," a flashback to the '80s and '90s that joins the recent trend of stories that won't allow people to forget why there aren't many gay men of Hugo's generation around. 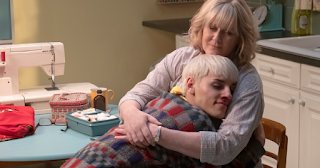 Grant (who questioned his own casting when a gay actor could have taken the role) lives up to the creatives' confidence in him with a funny and likeable performance, bolshy with underlying brittleness, but it's inevitably Lancashire who provides the heart of the film, her face able to express vast heartbreak and pride with the tiniest expression. She has a convincing bond with Harwood, who impresses in the lead, and mixes the vulnerability and likeability of Jamie with the element of self-involvement that can make him domineering (a trait he eventually manages to filter off into his drag persona Mimi Me.) 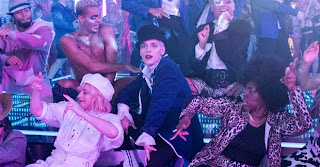 Butterell's first time as a film director sees him impressively manage visuals that make Sheffield look great and give the film a fairytale edge when needed, without overly glamourising what the location and the characters' lives are most of the time. It's maybe not quite got the energy and comedy of the stage play, and the way that, despite the story being about a gay character, all the teenagers are presented as oddly sexless, feels a bit more stark here. But then again streaming a movie is a very different atmosphere from seeing a live show, and while it feels faithful to the original it also fits immediately into a long tradition of British feelgood films like Billy Elliot and The Full Monty. I don't want to make any predictions about how many new fans of the musical it'll create in case I'm wrong again, but it does deserve to make many, and should please existing ones with its mix of the original's spirit and something of its own flavour.
Everybody's Talking About Jamie by Dan Gillespie Sells and Tom MacRae is streaming internationally on Amazon Prime, and has a limited cinema release.
Running time: 1 hour 55 minutes.
Photo credit: Amazon Studios.
*although nobody tell RuPaul that the shout-out to him has been replaced with one to Bianca del Rio, who's played Hugo on stage in the West End and is about to reprise him in California, and who also gets a cameo in the film
Posted by nick730 at 14:52