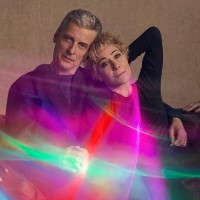 I'm calling this a re-review because it's still the same Michael Longhurst production that Nick Payne's Constellations premiered with in 2012, and which I've seen three times before. But don't worry if you're unfamiliar with the play, you don't need to go back and read three previous reviews to understand this one (though if you really want to you can find them on the Nick Payne label on the blog,) I'll still introduce the original high concept. Along with a whole new high concept for this West End revival in particular: The two-hander has four rotating casts, starting with Sheila Atim and Ivanno Jeremiah, followed by Zoë Wanamaker and Peter Capaldi, then Omari Douglas and Russell Tovey, and finally Anna Maxwell Martin and Chris O'Dowd, each hoping to bring a unique angle to the story. And yes, I was very tempted to book for all four, but after a year of no theatre, a summer of the same play four times might have been too much of a shock to the system, so I decided to pick two that seemed the furthest from the casts I've seen before.
They're all great options but I eventually eliminated the first and last pairings in the season as being closest in age and gender to my previous visits. Which brings me to tonight's cast, the oldest I'm aware of having taken on the roles of beekeeper Roland (Capaldi) and quantum physicist Marianne (Zwanamaker,) who meet at a mutual friend's barbecue, and never see each other again. Unless they actually end up spending the rest of their lives together. 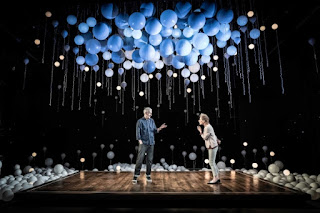 Their jobs bleed into many of the play's themes, with Marianne's defining its structure: Short scenes, many of them repeated with slight variations, each of them setting up a different path in the quantum multiverse. We see a few that don't work out, but mainly follow versions of the story where the two become a couple. And because quantum physics says the past, present and future coexist, we sometimes jump forwards in time as well. So we know that even the happier possible timelines will be cut short by Marianne becoming terminally ill. It's funny, charming, brutal and heartbreaking in equal measure, but you probably figured from the fact that this is my fourth visit that I recommend the play itself. 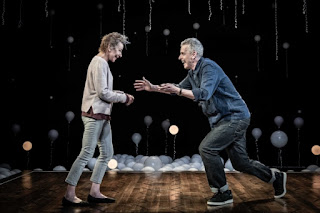 Previously cast with actors in their thirties, putting a couple of twinkly-eyed sixty- and seventy-something actors in the roles opens up even more possibilities in a story all about them: Perhaps Roland and Marianne are the same age as their actors from the start, and the story works perfectly convincingly as one of older people finding love, and being as capable of sorting out or spectacularly fucking up their lives as those much younger. Or maybe the opening scenes take place much earlier in their lives, and the moving conclusion comes at the end of a much longer relationship than we usually get to see. The way Lee Curran's lighting flashes on the balloons of Tom Scutt's design feels even more like synapses flickering next to Zwanamaker's fragile performance, and Longhurst, who's lived with Constellations for a decade now, continues to find ways Payne's story can become even more universal.
Constellations by Nick Payne is booking until the 12th of September at the Vaudeville Theatre; Peter Capaldi and Zoë Wanamaker appear in repertory until the 24th of July.
Running time: 1 hour 15 minutes straight through.
Photo credit: Marc Brenner.
Posted by nick730 at 22:02