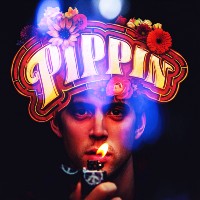 I first saw Avenue Q long before I ever saw Pippin, so maybe that's why it's taken me until now to wonder if the former's recurring theme of Princeton searching for his Purpose is a deliberate pisstake of the latter, and the title character's wandering through the world in the conviction that there's a great meaning to his existence that'll reveal itself if he can just tick off all the mundane things other people do. In Stephen Schwartz and Roger O. Hirson's tuneful but demented musical "the mundane things" include ruling half of Europe, because it's (very) loosely based on the son of Charlemagne, who actually was called Pippin (well, Pepin, which is a bit more plausible as a Mediaeval French name.) At the start of the show he's just come back from years of study, but as heir to the throne Pippin (Ryan Anderson) thinks he should learn the ropes to succeed his father (Daniel Krikler.)
This largely consists of war, which he dismisses as his path in life because of all the wholesale slaughtering of innocents; or murdering and usurping his father, which he rejects on the slightly less lofty basis that he can't be faffed with all the admin. 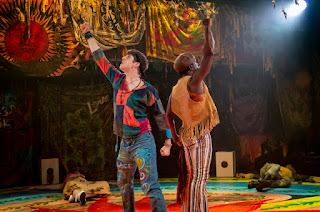 Other options he tries out are humouring his randy grandmother, casual sex and a more serious family relationship, and Schwartz really does cram in a lot of memorable songs that have become standards. But what really kicks the show into whatthefuckery for me is the framing device, which is meant to be a touring band of players who choose a new actor to play Pippin every night, because the previous one always ends up, ahem, indisposed by the end of the show. In my experience this framing device is what directors most like to play around with, and here Steven Dexter transposes the action to a hippie commune in the 1960s. 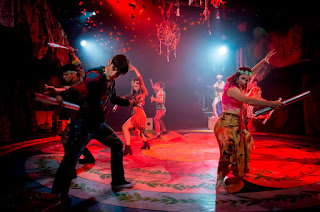 Pippin was last in London only three years ago, and I wasn't sure if I wanted to see it again so soon; but I have a week off and wanted plenty to do, and besides this is a show so deranged I still have one of my annual awards named after it, so it's always worth a go. Also, Dexter has assembled one of the most outrageously attractive casts you'll see on a stage, which has helpfully reminded me of my own greater purpose in life, as the dirty old man of London theatre blogging. Honestly I think there was quite a lot of impressive acrobatics going on that I missed because I was distracted by Alex James-Hatton, whose ripped shorts were more rip than shorts. 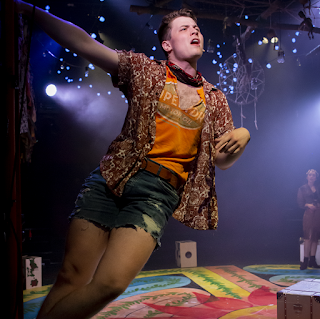 Musically the many catchy songs are well-performed, although the common problem of a sound mix that drowns the voices out under the instruments raises its head again, even in a production with only two musicians on stage. As for the '60s conceit, it certainly suits the style of songs that debuted in 1972, David Shields' designs tap into a dreamy, druggy feel that matches the haphazardness of the story, and the suggestion that the Leading Player (Ian Carlyle) is randomly plucking members of the troupe out of the circle to play the characters makes up for the lack of much diversity in age when it comes to playing the older characters. Still, I thought Genevieve Nicole, previously a very good Leading Player in the same show, here slices off a few too many helpings of ham as Pippin's grandmother Berthe. 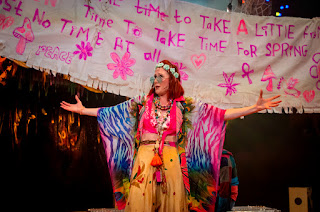 It's pretty incoherent - I mean, it's Pippin - but it's not helped by Dexter not dropping any hints about the dark underside of the troupe until very late on, so the Leading Player suddenly freaking out at Catherine (Natalie McQueen) for going off-script comes out of nowhere, let alone the climactic special performance they've got in mind for Pippin himself. It's a shame because the Summer of Love setting lends itself to a twist where this happy tribe turns out to be closer to the Manson Family, but the seeds for that aren't really planted. This is, though, a largely enjoyable production with its own take on the eccentric musical, even if it does leave it feeling more disjointed than usual. Which is saying something.
Pippin by Stephen Schwartz and Roger O. Hirson is booking until the 14th of August at the Charing Cross Theatre.
Running time: 2 hour 5 minutes including interval.
Photo credit: Edward Johnson.
Posted by nick730 at 22:59