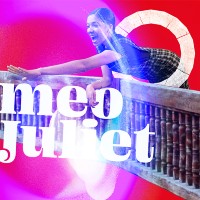 After the government's handling of Covid-19 in general, and the arts in particular last year, I think there was always an expectation that when theatre did come back, it was unlikely to have become any less critical of those in power. I'm not sure anyone would have guessed that a Globe production of Romeo & Juliet would be the first to really give it to them with both barrels; unless, of course, they'd seen a certain political photo opp featuring Michelle Terry in the background, glaring with the heat of a hundred suns. Ola Ince's production was one originally planned for the scrapped 2020 season, and was presumably always conceived as intensely political, but I wonder how much the last year sharpened its teeth. In a city where the ruler cracks down on violence to avoid having to look too deeply into its causes, Romeo (Startled Giraffe Alfred Enoch) and Juliet (Rebekah Murrell) fall in love, against the wishes of the rival gangs they both belong to.
Romeo is one of the Montagues, here a gang of neglected youths terrorising women on the street. Juliet has grown up more materially wealthy among the Capulets, but her parents' interest has always been more with making deals than with their daughter's wellbeing, up to and including using her as a bargaining chip to marry off to Paris (Dwane Walcott.) 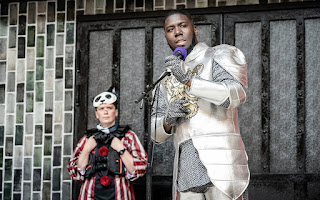 One of the Globe's safety features for this year has been to play without intervals, to eliminate that rush of audience members running around at the same time. This has naturally led to more carefully edited shows to make the running time more manageable without a loo break, and both these steps have been a great help in a Shakespeare play I'm rarely fond of. This is how I like to see Romeo & Juliet on stage: Briefly. And I'd add this one to Julius Caesar as a play I think benefits from not having an interval, allowing the energy of the first half to carry through and support the drearier second. 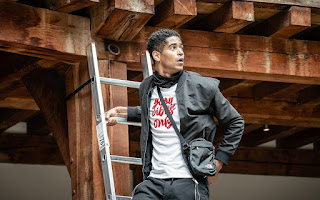 While Ince's production isn't above taking a swipe at multiple targets, its main political thrust is clear: The problems in this play come about because of a governmental neglect of young people, and their mental health in particular. With few prospects and little to occupy their time, they're more likely to be drawn to crime and violence. And if they have untreated depression and feel isolated, they're not only going to have suicidal thoughts but may also jump into anything that seems like a loving relationship - and put so much store in it that they feel their lives depend on it (like Rupert Goold a decade ago, Ince has spotted that the lovers speak about Death at least as romantically as they do about each other.) 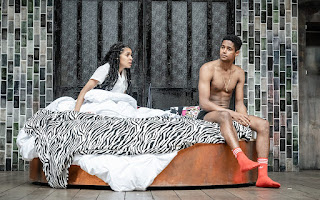 The way these conceits are presented is something of a blunt instrument: Jacob Hughes' set is dominated by a video screen which projects quotes, facts and statistics with some relevance to the scene at hand, usually also announced by a cast member. With the text changing pretty frequently at first I was worried this very literal form of Brechtian captions would get irritating fast; and I can't really argue that it's not spoon-feeding the audience to an extent, but personally the chutzpah of how relentlessly and specifically the production points the finger overrode that for me. And how couldn't I love the correlation of caption and scene that suggests closing half of all London youth centres will send young people to bad places, like hanging out with dodgy priests? (And Sargon Yelda's is the dodgiest - I'm not sure you could skewer the character of Friar Lawrence better than the sheer speed with which he wipes his fingerprints off a crime scene.) 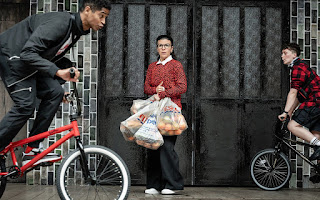 Despite the heavily cut-down text there's also some interesting character work: Sirine Saba is probably the best I've seen since Noma Dumezweni at making the Nurse a three-dimensional character, and I liked the fact that both she and Juliet actually got a few moments on stage with Will Edgerton's Tybalt before his death - it's something I always find irritating that they have to go into a big mourning scene for a character whose relationship with them has never been established onstage, and whom we've only seen as a hissing villain before. There's also a new dynamic in making Mercutio (Adam Gillen) and Benvolio (Zoe West) something of a double act: I've always seen Benvolio mainly defined in terms of his relationship with Romeo, but this refashioning of them as a kind of Rosencrantz and Guildenstern sidekick duo makes him one of the characters left adrift by a loss when Mercutio dies. 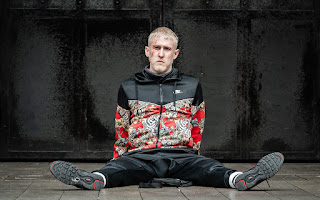 In many ways I feel like Ince's production is getting away with murder, and I suspect people who like the actual play more than I do will be less sympathetic to its clumsier elements. But where in a different context I might have been more critical of the way subtlety is thrown out of the window, overall the energy and ideas here made it work for me. And though it's a dark enough approach to the play to merit an "if you've been affected by any of the issues raised..." speech at the curtain call, it's also peppered with enough spirit and humour to balance it out (who'd have thought the various goings-on at the Capulets' ball could be so easily boiled down to Walcott channeling his inner Lionel Richie?) Of course the way it's been cut down almost by half also goes along with my thoughts on how much padding there is; the focus on poor mental health helps with this, as you don't need endless justificiation for why people are making rash and terrible decisions all the time. Plus, the venue having to keep its actors physically distant on stage can be distracting at times, but it feels pretty apt in a pair of lovers who really don't spend any time together at all before deciding to kill themselves for each other's sake. All in all this is a deeply chaotic Romeo & Juliet but one that, for me, holds together with method in its madness.
Romeo & Juliet by William Shakespeare is booking in repertory until the 17th of October at Shakespeare's Globe.
Running time: 1 hour 45 minutes straight through.
Photo credit: Marc Brenner.
Posted by nick730 at 16:19