Theatre review: As You Like It
(Shakespeare's Globe & Tour) 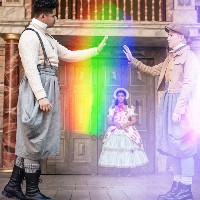 Returning to the Globe and beyond for 2021 are Michelle Terry's version of the Tiny Touring Shows, which sees Brendan O'Hea direct the same small cast in three stripped-back Shakespeare plays. On tour, these mainly play as "Audience Choice," with the decision on which of the plays will be shown at any given performance left to a last-minute audience vote. Unusually, this year that choice includes one play that's also part of the main season, so presumably to avoid confusion with the Sean Holmes version still playing, A Midsummer Night's Dream can only be seen in London if and when it wins one of these votes. But the other two have as usual been given a few regularly scheduled dates at the Globe, and my first encounter with this year's touring ensemble is an enduring musical favourite that matches the productions' actor-musician aesthetic, As You Like It. Set mainly in a rather idyllic Forest of Arden, most of the characters are nobles and courtiers banished from court after a coup, who hang out in separate groups, sometimes in disguise, despite the fact that they're all either related or already knew each other and could have easily just reestablished their old dynamics.
At the centre is Shakespeare's largest female role, Rosalind (Emma Ernest,) recently-fled daughter of the deposed Duke (Sara Lessore,) in the forest disguised as a man long after the disguise was actually useful, and playing mind games with Orlando (Stephenson Ardern-Sodje,) the young nobleman she fell in love with just before they were both exiled. 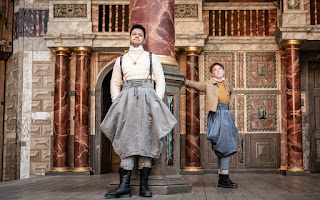 As You Like It is a favourite of mine, although the first half can be unpredictable: Some productions can find the comedy right out of the gate while others, like this one, need to get to the more farcical events in the forest, with four variously mismatched couples chasing each other around, to really find their stride. With only eight speaking actors (plus two non-speaking musicians) doubling can often be used interestingly, and here Katy Secombe and Mark Desebrock gender-flip to play two of the four pairs as, respectively, Touchstone and Audrey, then Phoebe and Silvius. Some deft editing of the text makes for a triple rather than quadruple wedding at the climax, although this does mean we lose all the punchlines about how doomed Touchstone's marriage is. 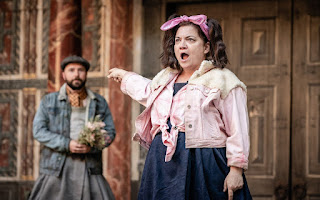 The edits also make Colm Gormley's Jaques a bit blink-and-you-miss-him outside of his most famous speech, but the musical numbers, led by Tom Chapman's Amiens, are kept as a major feature of the production. At just under two hours it's a bit too speedy to really get any clever interpretations of the play in - it runs along cheerfully and amusingly enough, but the best gag may be a visual one courtesy of designer Andrew D Edwards, when we find out what Celia (Anna Crichlow) considers to be an unremarkable, realistic-looking shepherdess' costume. 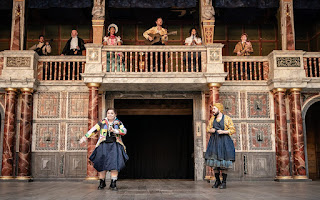 With social distancing still in place it means another rare chance for me to be a seated groundling; the flipside is that, unlike the full-scale A Midsummer Night's Dream where there was enough enthusiasm from all sides to make up for empty spaces, here having both audience and cast reduced leaves the show feeling exposed. These shoestring Tiny Tour shows make a lot out of little, but it might be asking for miracles to get them to bring a half-empty Globe to its feet without any bells and whistles. It's an affable production that'll probably do better on tour or once the Globe is allowed to fill up again, but it's not quite got the oomph to counteract the difficult circumstances it's being staged in.
As You Like It by William Shakespeare is booking in repertory until the 29th of August at Shakespeare's Globe; no touring dates have been announced as of yet.
Running time: 1 hour 55 minutes straight through.
Photo credit: Marc Brenner.
Posted by nick730 at 21:47