PREVIEW DISCLAIMER: Although Operation Mincemeat premiered a couple of years ago, it has been so extensively rewritten during lockdown that the Southwark Playhouse run has now been reclassified as a Work In Progress. 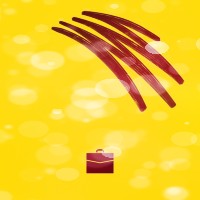 In fact it sounds as if we should consider this a completely different show from the one that the company SpitLip originally produced at the New Diorama: An usher informed me that the show that had been due to transfer in 2020 ran 75 minutes without interval; which means as it currently stands the first act runs longer than the entire show used to. Written and composed by David Cumming, Felix Hagan, Natasha Hodgson and Zoe Roberts, Operation Mincemeat is a farcical musical based on a real World War II mission with a particularly macabre remit: The Allies planned to invade Sicily, but needed Germany to think the target was Sardinia, so they'd redeploy their forces. The decoy was to be a dead airman, washed up on the coast of Spain with top secret documents handcuffed to him in a briefcase.
A team at MI5 is put together to locate a dead body that can play the part of the drowned man, and an unknown homeless man who died of poisoning is seen as the closest match. Like any living agent the dead man will need a legend, so the agents go to work creating not just official documents but a whole paper trail for a personal life. Finally, the local agents in Spain will need to so convincingly pretend they don't want the briefcase to fall into enemy hands, that the enemy will be sure to make a play for it and believe its contents.
The ensemble cast of Cumming, Hodgson, Roberts, Claire-Marie Hall and Jak Malone play all the parts in Donnacadh O’Briain's frantic, gender-blind production, with Hagan leading the band. This was my first time back in a full auditorium with no social distancing, and the crowd were clearly having a great time, but I was personally more on the fence about it: I'm a big fan of silliness on stage but SpitLip have gone for a full-on clowning style of performance, and initially at least I started to wonder if the website's age recommendation of 6+ actually meant they'd pitched the entire show to 6-year-olds. Four out of five performers do at least tone this down as the show goes on, but the fifth was clearly never going to be to my personal taste. I don't know if this is just the company's style, or an over-eagerness to please that might be toned down during this work-in-progress period: I've yet to see a gratuitous reference to the "Single Ladies" dance that doesn't feel like a desperate grab for cheap laughs. and the shame is I saw no reason why they should be desperate at all.
Because for the most part I found the script and songs to be very strong. The story offers plenty of twists and turns as obstacles get thrown in the way of the plan - like the revelation that the pathologist who found the body is a fraud, and that actually an autopsy will be able to tell the difference between a drowned and poisoned body; or a genuine airman crashing in the exact same area at the exact same time as the fake one. As well as the core group of characters there's plenty of comic cameos, including Ian Fleming, who was working at MI5 at the time, and the obligatory comedy Nazis (although Hitler himself doesn't make an appearance, despite the show's poster image being of Hitler appearing in the Paris 2024 Olympic logo.)
Though largely erring on the side of pastiche, the songs are also generally strong, and the usual terrible sound mix problem only really afflicts a couple of group numbers. It's probably no coincidence that the two most memorable musical moments come when the show takes a moment for the characters, specifically the main female ones, to breathe: A spinster (Malone) mocks up a letter from the dead man's sweetheart, in the process revealing a lot about her own experiences in the previous World War; then she and her younger colleague (Hall) sing about the way their contribution to the war effort won't be remembered with medals and honours like the men's.
Not having seen the original version of the show I can't comment on how much of all this is the stuff that made it so popular the first time, and how much is new - on timing alone, roughly half the new show at least has to be new material. 75 minutes seems a ridiculously short time to try and tell this story, especially with musical interludes. The new version has perhaps gone a bit too far in the opposite direction, and I imagine will be shortened a bit as well in the coming weeks, but overall there's more strong material than weak. Going by the general reaction I think this will be most people's cup of tea, but personally I found myself very impressed with the play itself, while the production's particular approach to trying to draw the audience in only pushed me away.
Operation Mincemeat by SpitLip (David Cumming, Felix Hagan, Natasha Hodgson and Zoe Roberts) is booking until the 18th of September at Southwark Playhouse's Large Theatre. (Performances up to the 7th of August are classed as work-in-progress; the show has since extended, and the new dates are either classed as previews or regular performances.)
Running time: 2 hours 50 minutes including interval.
Posted by nick730 at 23:21