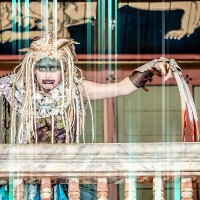 The second of two tiny tour shows playing at the Globe this summer is Brendan O’Hea's production of The Tempest; not a play I like as much as the companion piece, As You Like It, but of course the flipside to that is that I don't come into it with quite as high expectations. So while it's still true that these smaller-scale shows suffer from the lack of a full crowd (the make-do-and-mend style is endearing but really gets much of its energy from audience interaction,) this is two hours that go by pretty briskly. Prospero (Mark Desebrock) was deposed as Duke of Milan after showing a complete lack of interest in doing the job, and fled to sea with only his baby daughter and a set of magic books that he used to obtain vast powers. On arriving on a small, almost-deserted island, he used these powers to enslave the inhabitants Ariel (Emma Ernest) and Caliban (Stephenson Ardern-Sodje,) before waiting years for a chance to take revenge on the usurpers and reclaim his dukedom.
This chance comes when his daughter Miranda (Sara Lessore) is in her teens, and the conspirators sail near the island on the way back from a wedding. Prospero raises a tempest that crashes their ship, separating them from each other and leaving them at his mercy. He simultaneously contrives a politically-expedient marriage between Miranda and Ferdinand (Tom Chapman,) heir to the throne of Naples. 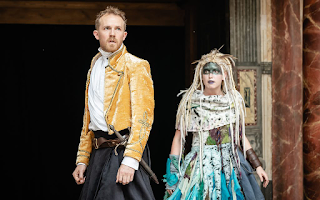 Again, the simplicity of these productions doesn't lend to a huge amount of critique, although there are a couple of missed opportunities: I've never seen such a muddled way of turning Caliban and Trinculo (Colm Gormley) into a four-legged beast, although Katy Secombe's somellier Stephano salvages some laughs from the scene. And Andrew D Edwards' best design is a fearsome bird of prey Ariel, but Ernest's gentle performance doesn't really match it. Although the fact that she never shows any sign of resistance to Prospero but still gets tortured as if she had, does feed into one interpretation the production really pushes for. 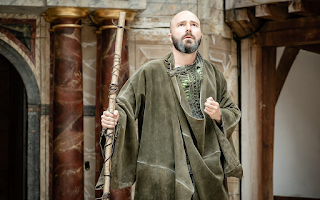 I'd say I have no idea how the image of Prospero as a cuddly patriarch ever took hold (except I think I know perfectly well why a Colonialism Is Benevolent interpretation was popular for so long) but it's probably fair to say most recent productions I've seen have come closer to my view that he's a pretty dark character in a number of ways. O'Hea and Desebrock certainly seem to agree - one consistent thing here, and another thing to add to the long list of why his return to power is very bad news for Milan: Prospero really, really likes torturing people. (Also I had some thoughts on how Ariel, Caliban and Miranda all exhibit the behaviour of abused children but I'm not sure how much that was the production and how much was just my mind wandering.) 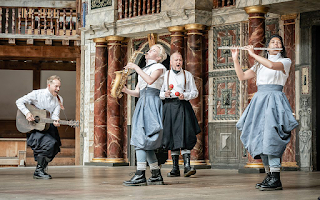 Which isn't to say this is a completely humourless production but it certainly veers more to the darker interpretations of the play. Which is fair enough, and also while I can see why the Globe's programme this year would naturally lean more towards the comedies (there's four in the main house versus only Romeo & Juliet representing the tragedies,) it does clash a bit with the need to run through the shows quickly so they can play without intervals: Tragedies can gain tension and momentum by speeding them up, but with comedy timing is everything, and this pair of tiny tour shows don't feel like they've had the chance to let their comic chops breathe. The company's done good work under the circumstances, but there's no denying those circumstances have inhibited them.
The Tempest by William Shakespeare is booking in repertory until the 29th of August at Shakespeare's Globe; no touring dates have been announced as of yet.
Running time: 2 hours straight through.
Photo credit: Marc Brenner.
Posted by nick730 at 21:18