"What if Sergey Lazarev's performance of 'You Are The Only One' at the 2016 Eurovision Song Contest, but roughly 30 times longer?" 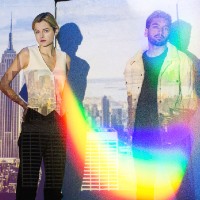 Concluding Sonia Friedman's Re:Emerge season at the Pinter is the superficially frantic but essentially quite ponderous Anna X, Joseph Charlton's play about apps, influencers and the business of turning the appearance of success into a genuine commodity. Both characters in the two-hander trade on appearances, Ariel (Nabhaan Rizwan) by developing a dating app whose USP isn't so much the people on it as those off it: There's a waiting list to have your profile approved, and it's a lot longer than the actual list of users because you can't get on until you're vetted for looks and influence. Exclusivity is what'll make Ariel's fortune, and while the value of his company is still speculative he spends money like it's already in the bank. It's no surprise if he soon attracts Anna (Emma Corrin) who, and I don't think it's a spoiler as it's heavily hinted from the opening lines and confirmed soon after, is much more of a traditional con artist.
Supposedly a Russian oil heiress, Anna is in fact a failed art student who, initially at least, took on the persona claiming it was a kind of concept art in the spirit of Damien Hirst. By the time she's wangled an internship at a New York art magazine she's built up what looks like a convincing life on Instagram, and it's building her reputation as the city's mysterious new muse. 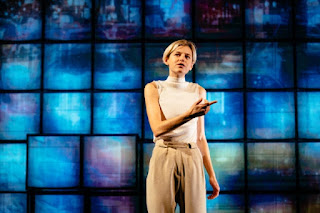 Thunder and lighting, it's getting exciting
This is the kind of play where the city gets described as the third character - neither of them native to New York, the pair are, to differing degrees of self-delusion, chasing a dream of the city. This is one of the things brought to frenetic life by Mikaela Liakata and Tal Yarden, credited with designing the set and video, which here essentially amount to the same thing as the cast clamber over the blocks illuminated in ever-changing designs, Jessica Hung Han Yun's lighting and Mike Winship' s sound design adding to a sense of urgency over what is essentially a pretty simple story. 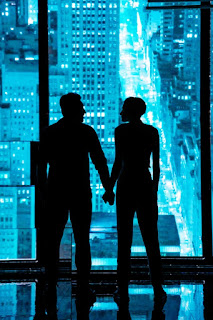 Lights up the skyline to show where you are
I feel like Daniel Raggett's production is meant to be disorientating, but perhaps not quite as disorientating as it feels from the back of the Balcony, where you're practically looking straight down on the flashing, mirrored box of tricks set. For all the sound and fury a lot of Charlton's script has the characters speaking to the audience from some point after the main events and musing over them, but I found myself picking out thoughts all over the place that weren't connected to that: Like, to what extent is Anna the ersatz Russian heiress a conscious Anastasia reference? And Anna leaves Ariel with a several thousand dollar bill quite early on; is he particularly dim for falling for her story after that, or is the audacity of how transparent the con is part of her manipulation of him? 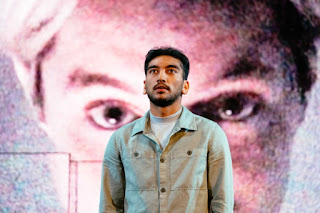 My love is rising, the story's unwinding
I quite enjoyed Anna X at the time but I'm left feeling pretty unsatisfied by it. The performances are strong but I wished we'd had a moment to actually appreciate that before the next (sometimes literally) dizzying video effect. And ironically enough, all these bells and whistles are being used in a story about people who use distractions from how little of what they present is genuine, so maybe it's not surprising if it left me questioning that of the show itself.
Anna X by Joseph Charlton is booking until the 4th of August at the Harold Pinter Theatre.
Running time: 1 hour 30 minutes straight through.
Photo credit: Helen Murray.
Posted by nick730 at 22:23