Theatre review: My Night With Reg 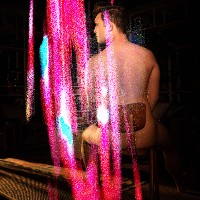 If established theatres were hit hard by lockdown, how bad must it have been for new venues that hadn't had a chance to build up an audience base or cash reserves? The much-trumpeted, shiny new Boulevard Theatre seems, according to its website, to have permanently shuttered after barely getting a chance to open, but across the river at Battersea Power Station Paul Taylor-Mills' Turbine Theatre is back up and running, reopening with a fairly safe bet: Despite its underlying bleakness, Kevin Elyot's My Night With Reg has been consistently popular with audiences: Both its 1990s debut at the Royal Court and the 2010s revival at the Donmar Warehouse got West End transfers. The only question is, was seven years (it feels a lot less) since last seeing the play too soon for me to revisit it?
The play is structured as if taking place over one night, but there's actually four years between the opening and closing scenes. The former is a housewarming party: Guy (Paul Keating) is pushing forty and has been quietly successful enough to buy a decent-sized flat that even has a garden. What it doesn't have is someone for the perennially single Guy to share it with. He's thought of by all his friends as the nice guy it's hard to see as a sexual being, but it probably doesn't help that he's spent the last twenty years still obsessed with John, the friend he had a crush on at university. 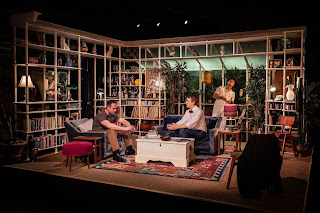 A chance encounter with John (Edward M Corrie) sees him invite him to the housewarming, and against all expactations he actually turns up, reigniting Guy's desperate feelings. Also there are their mutual friend Daniel (Gerard McCarthy*,) mismatched couple Benny (Stephen K Amos) and Bernie (Alan Turkington,) and a young barman from the local gay pub, Eric (James Bradwell,) who's making some extra cash by decorating Guy's flat. Never seen on stage but ever-present in everyone's minds is the titular Reg, Daniel's boyfriend, with whom John has also been having a secret affair. 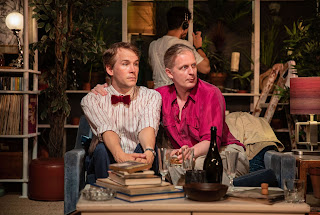 By contrast, never mentioned but always present is the fear of AIDS, as the play is set among a group of gay men in the early to mid Eighties, and in the first scene Guy is the only one who seems to be worried about it. But everyone in the play except for Guy has had at least one night with Reg, so when the second scene takes place after Reg's funeral, they've all become acutely aware of how real the threat could be. Designed by Lee Newby, the set for Guy's flat is beautifully intricate, with a lot of great attention to detail in the books and records that dress the shelves, although I didn't feel like the costumes screamed out 1980s quite as clearly, and I do think the specific time period it's set in is pretty important to parts of the story. 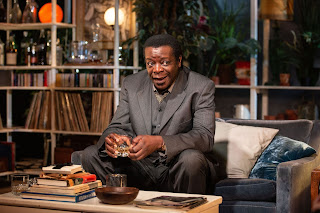 The Olivier Awards have a Best New Comedy category that often goes to surprising shows when there's a shortage of out-and-out comedies to nominate, and My Night With Reg is one such winner: It's full of acerbic wit and sharp one-liners, but describing it as an all-out comedy feels like a stretch. Much of Elyot's other work reveals much more obviously an internalised homophobia and bitterness towards the wider gay community, and Matthew Ryan's rather muted production (despite what the publicity photos suggest, even the usual nude scene has John and Eric keep their underwear on) seems to be less about the external threat to that community from AIDS, more about the friendly façade of the group covering up for the fact that they just want Guy as a confessor for their romantic and sexual misadventures, which has the effect of digging the knife in about how alone he is. (Not that Guy ultimately comes across well - his obsession with John turns out to have gone to downright creepy levels.) 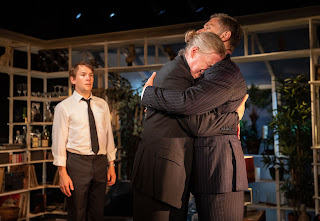 I can see why, especially now, a theatre might need interval bar takings, but adding an interval does affect the play's rhythm a bit as well, which perhaps adds to the feeling that we're on a downer from the start. (My Night With Reg has a structure where on two occasions it seems as if a little time has passed in the same evening, only for the audience to get a jolt when they realise actually two years have passed and a main character has died in the interim; adding an interval at the first of these obviously affects this sense of time imperceptibly racing past.) Perhaps that's what's happened to me and seven years was too soon to revisit the play, but my main takeaway was the play being even bleaker and more misanthropic than I remembered. (That, and noticing that it shares with Abigail's Party an alcohol intake that, if the actors matched their characters for real, would send the cast to Casualty halfway through the first scene.)
My Night With Reg by Kevin Elyot is booking until the 21st of August at the Turbine Theatre.
Running time: 2 hour 5 minutes including interval.
Photo credit: Mark Senior.
*his programme bio say his TV work includes "Holly Oaks," and I wondered if the typo was accidental, or a deliberate attempt to make people forget Rubbish Tranny
Posted by nick730 at 18:52