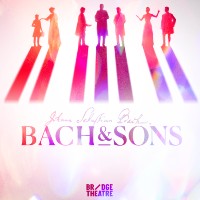 The Bridge Theatre's large, easily flexible auditorium, together with Nicholas Hytner's contacts meaning he could quickly bring in many small-scale shows that could play to diminished capacity without breaking the bank, meant that during 2020's two false starts coming out of lockdown it became my most visited venue. The socially distanced seating remains but the programming has gone back to business as usual, with a play that allows Simon Russell Beale to combine his acting day job with his side hustle presenting documentaries about choral music. In Nina Raine's Bach & Sons he plays Johann Sebastian Bach, the most successful and best-remembered of many generations of composers, although in the years covered by the play that doesn't look like it'll be the case: He correctly predicts that his death will be a great career move as he'll get reevaluated, but at the time his meticulous, mathematical musical style is going out of fashion.
That's not something he would openly admit near his two oldest sons though, whom he's training to follow in his footsteps, and berates for any deviation from the formula. If there's one central relationship the play follows it's with the second son, Carl (understudy Al Coppola,) who's never left in any doubt that the eldest, Wilhelm (Douggie McMeekin) is the favourite. 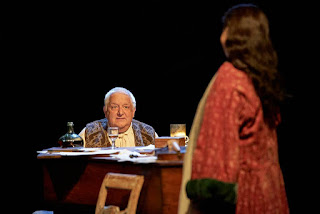 This is despite Wilhelm being slapdash in his work and eventually an alcoholic who sponges off his father, while Carl's approach is more similar to his father's but with less reliable results: One thing that's toyed with as a major theme for the play is Bach's affections automatically going to the more naturally talented son rather than the one who puts the work in, even if the latter quality is theoretically what he values more. But I say "toys with" as Bach & Sons never quite settles on what it's about, whether it be Bach's pigeonholing of his work as being for religious expression only, or how the man's relationship with his surviving children is influenced by the huge infant mortality numbers of the time. 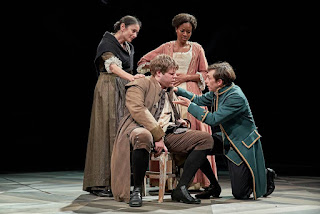 When I said the Bridge's programming had gone back to business as usual, regular readers might both have seen that as a red flag about the venue's track record with new writing, and while not a disaster, this isn't anyone involved's best work. The scale is about right for the current circumstances but is still odd - it kind of wants to be a sweeping family epic, but focuses on a small group like a more intimate drama. The women in Bach's life are easily dismissed by him when they're around, much missed when they're gone: First wife Maria Barbara* (Pandora Colin,) dies wishing he'd remarry to her long-suffering sister Katharina (Ruth Lass,) but knowing he'll choose the young singer Anna Wilcke (Racheal Ofori) instead. Anna herself ends up a tragic figure, mother to nine children, seven of whom she has to bury. 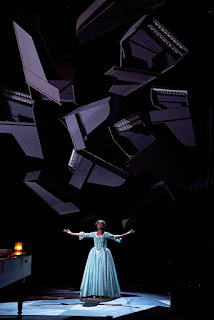 When the Bridge first opened, a Nina Raine play starring SSRB as Bach was teased as coming in the next season, but has taken a bit longer to surface. I wish I could say it was worth the wait - and full disclosure, I've been ill for the last week and had trouble sleeping, so I'm still tired and irritable much of the time - but much of it did struggle to hold my attention. There's fun to be had in a waspish, sweary Bach who's obviously made for SSRB to chew the scenery, and pathos as Carl's eventual success at court - partly down to his persistence, partly down to Frederick the Great (Pravessh Rana) blatantly and unapologetically wanting to bum him - results in his father being summoned to be publicly mocked. But Vicki Mortimer's set design, with pianos hanging over the stage as if liable to crush those below at any minute, provides a sense of drama the play itself never lives up to.
Bach & Sons by Nina Raine is booking until the 11th of September at the Bridge Theatre.
Running time: 2 hours 25 minutes including interval.
Photo credit: Manuel Harlan.
*and yes I did get distracted by the idea of women called Barbara Bach ending up married to famous musicians
Posted by nick730 at 17:47