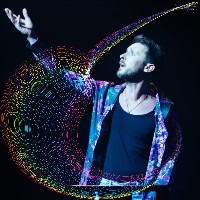 I think Last Easter was one of the plays that had to be cancelled mid-rehearsal for the first lockdown, now getting a second chance at a London premiere at the Orange Tree. Tinuke Craig directs Bryony Lavery's four-hander about a group of friends who all know each other through their jobs in theatre - although it's June's (Naana Agyei-Ampadu) job as a lighting designer that is most frequently mined for symbolism. June has recently learned that the breast cancer she overcame has spread to her liver and is now terminal, and her friends Gash (Peter Caulfield) and Leah (Jodie Jacobs) decide to take her on an Easter road trip to France. Knowing they can fit a fourth person in the car and spread the costs, alcoholic actress Joy (Ellie Piercy) is invited as the least-worst option out of their friendship circle, but she ends up becoming connected to the core group in surprising ways.
Catholic Gash, Jewish Leah and half-hearted Buddhist Joy have a plan to surprise the atheist June with a trip to Lourdes, ("not Madonna's daughter,") which she goes along with to humour her friends. She describes what ends up happening to her there as a miracle, but it's a much bleaker one than any cure: For her the miracle is the loss of hope and the clarity that comes with that, and in the second act, a year later, she asks her friends to help her end her life on her own terms. 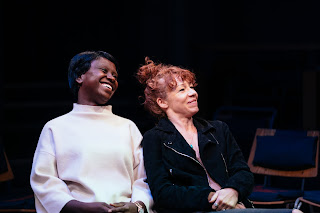 Although the actual trip to Lourdes is a pretty bleak scene (Lavery cuts through the religious theatre to reveal it as simply a place full of desperate sick people,) Last Easter is generally a more upbeat couple of hours than you'd expect from a play with so much death in it (as well as June's illness, Joy is still haunted by an ex who committed suicide, giving her dilemma in the second act an added dimension.) In fact for the most part the theatre of religion is viewed fairly positively - one of the few things that brings any enthusiasm to the quietly resigned June is the lighting in a Caravaggio religious painting. Appropriately, Craig's production has a stripped-back design from Hannah Wolfe, with Elliot Griggs' lighting providing much of the atmosphere. 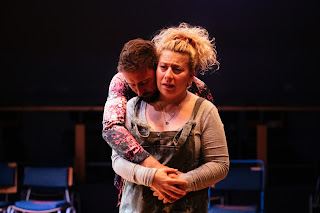 An uneven mix of the frantic and the low-key, Last Easter succeeds in individual scenes, but as a whole I feel like there's structural ideas I appreciate about it, rather than really getting sucked into the play itself. That odd contrast is doubtless on-theme: The other three always On, trying to avoid the inevitable with dad jokes, drink and adventures, while June quietly lets them get on with it before eventually revealing the devastating way they can actually help. There's a lot I liked, but if I find myself wondering whether I'd rather be watching Gash's drag show about Saint Bernadette as played by Judy Garland, that's probably a sign that I want entirely hooked.
Last Easter by Bryony Lavery is booking until the 7th of August at the Orange Tree Theatre.
Running time: 1 hour 50 minutes including interval.
Photo credit: Helen Murray.
Posted by nick730 at 18:23