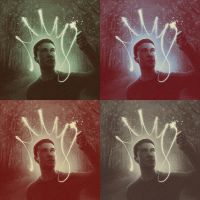 The last time I saw a production of Pippin was in 2011, just before I started this dedicated theatre blog, but my regular readers will both know that Partially Obstructed View has a long history with Stephen Schwartz and Roger O. Hirson's 1972 musical: That Menier production was so many different layers of weird* that my end-of-year review still features a category called The Pippin Memorial Award for Endearing Whatthefuckery‡. So, come December 2018, will Pippin win the award that's actually named after it? Well perhaps not, as Jonathan O'Boyle's production, first seen in Manchester, doesn't veer too wildly from the original framing device of a travelling group of mediaeval players plucking a boy out of the crowd to play the lead: Maeve Black's design is Victorian vaudeville, with old-fashioned magic tricks joining the song and dance to tell a story based, incredibly loosely, on one of Charlemagne's sons.

Pippin (Jonathan Carlton) is the Emperor's heir, returning from university and demanding that he be taken along to his father's holy wars. Here he discovers that Charles (Rhidian Marc) is a brutal and unyielding ruler, war pointless, and that he needs to find his own way in life. 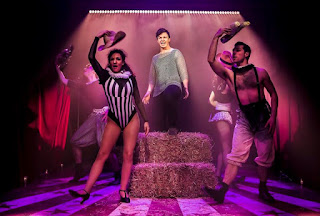 Pippin is essentially a coming-of-age story made up of a series of short stories in which the titular character tries out different paths in life, guided by the Leading Player (Genevieve Nicole.) Knowing the big finale the show was building towards, I didn't think the troupe really suggested their sinister side, but the excellent Nicole does start to build this idea more in the second act. She's also an example of the vocally strong cast O'Boyle has assembled - as Schwartz would go on to write Wicked, it's no surprise that he favours songs requiring them to belt out some huge notes and Carlton and Nicole and more than up to it. 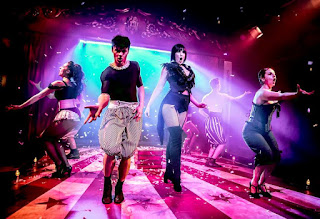 So is Mairi Barclay, who also gets to play both the most scene-stealing comic roles, as Pippin's stepmother Fastrada and his grandmother Berthe, the latter singing what might be the biggest showstopper of the night, the singalong "No Time At All." In fact this is overall a much stronger collection of songs than I remembered, from Pippin's signature song "Corner of the Sky" to Fastrada's manipulative "Spread a Little Sunshine" a lot of these came back to me quickly considering it's over six years since I last heard them. 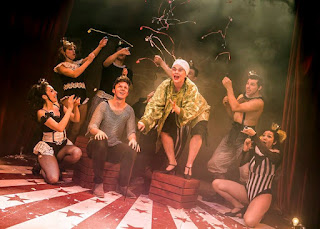 If O'Boyle's production isn't quite as dark as it could be (until the very end, when it uses the new ending to really sinister effect,) it really emphasises both the humour and the sexiness that's easily forgotten in a show best known as a popular US high school musical. This is mainly seen in Nicole and the other women's costumes, although for those of us otherwise inclined there's always Bradley Judge's shirt-averse Lewis while, after a shaky start, it's clear Pippin finds out exactly what he'd like to do behind the hay bales with the widowed Catherine (Tessa Kadler.) The heavy hints of incest between Fastrada and her son Lewis are another element I would imagine the high school versions leave out. 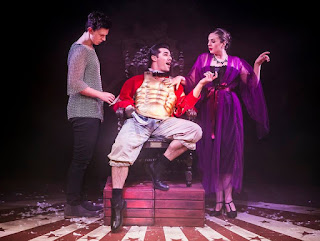 In a world where time gets turned back and corpses speak, vaudeville magic is a good fit and it's used simply but well here - notably with the aforementioned battlefield corpse, for which Andrew Halliday's soldier is cut into pieces in the upright version of the sawn-in-half trick (Wikipedia informs me the trick's called the Zig Zag Girl.) Pippin is a show whose contradictory moods may well be why it's not better-known over here, but O'Boyle's production just ploughs straight through and makes for an entertainingly odd show. It certainly remains an evening of endearing whatthefuckery; whether it's the most endearing whatthefuckery of the year we'll have to wait and see.

Pippin by Stephen Schwartz and Roger O. Hirson is booking until the 24th of March at Southwark Playhouse's Large Theatre.

*Layer 1: The show's quite weird anyway. Layer 2: Mitch Sebastian's production decided to set it inside an online video game. Layer 3: The design didn't end up looking quite as up-to-date as intended so it looked like Tron.

‡The production also began not just my but all of theatre Twitter's obsession with Harry Hepple's tattoos, which are only visible when you're not looking at them.
Posted by nick730 at 22:38