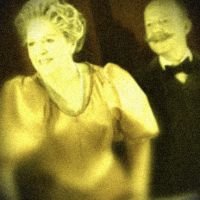 The Old Vic's previous artistic regime was, famously, not really that interested in Fanny, but on Matthew Warchus' watch she's been put centre stage alongside her brother. Ivo van Hove's tedious double-bill had me uninterested in seeing another Ingmar Bergman adaptation, but casting Dame Penelope Wilton* was enough to make me change my mind about Stephen Beresford's Fanny and Alexander. It's easy to see why this one suggested itself for the stage, following as it does a theatrical family through the eyes of its youngest members, Alexander (Guillermo Bedward, Kit Connor, Jack Falk or Misha Handley) and his younger sister Fanny (Zaris Angel Hator, Amy Jayne, Molly Shenker or Katie Simons.) Wilton plays their grandmother Helena, matriarch of the Ekdahl family who run a theatre and restaurant in early 20th-century Uppsala, Sweden.

The opening act takes place around Christmas, and is a mix of celebration and upheaval, as Helena announces her retirement from the theatre, and suggests that her son and daughter-in-law, the titular children's parents, might now be reaching an age where they should give up the young leads and start taking over the older character roles. 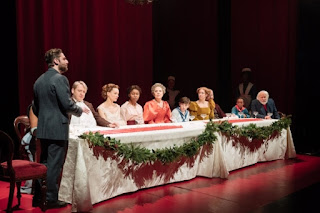 But right from the play's opening, Alexander has been visited by Death, so we know things will soon be shaken up even more, and a couple of months down the line his father Oscar (Sargon Yelda) dies suddenly. The widowed Emilie (Catherine Walker) remarries and, missing all the obvious danger signs, moves herself and her children in with the puritanical Bishop Vergérus (Kevin Doyle,) who predictably turns out to be a Dickensian monster. Supported by his vicious sister and servant, he punishes the children for the slightest perceived fault claiming he does it out of love, eventually imprisoning Emilie when it looks like she might try to flee. 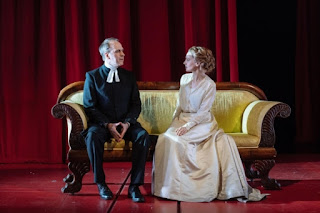 Max Webster's production plays out in three acts of roughly an hour each with two intervals, and Tom Pye's set helps it set out its story as a fight between imagination and repression, the first act in the Ekdahl house framed by red curtains as if all their lives are a stage, the second dominated by a stark white box as Alexander's stories and fantasies are treated by the Bishop as lies that have to be punished. In the final act, as the family try to rescue Emilie and her children, the fantasy world starts to intrude on the cold, brutal one: The story starts to give in more to its dreamlike and supernatural elements, while the white box turns at an angle and is invaded by giant marionettes. 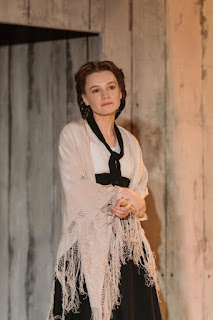 There's an obvious harshness in a story with spousal and child abuse at its heart (there were big audience gasps as, after Alexander chooses to be caned rather than locked in the attic overnight, the Bishop canes him them locks him in the attic anyway,) but Beresford and Webster have also managed to balance this with humour. It is, of course, most present around the Ekdahls, Wilton leading the way with her no-nonsense takedowns of her sons' various vanities and failings. There are also moments to lighten the darker scenes as well though, like Emilie's power struggle with the Bishop's sister Henrietta (Lolita Chakrabarti,) to keep things from getting too bleakly Scandinavian and maintain the story's fairytale element. 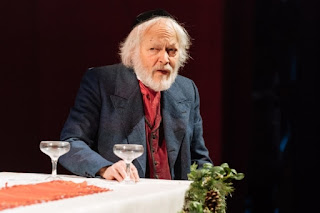 The production's well-served by its supporting cast, including Michael Pennington as Helena's Jewish old flame Isak, who becomes crucial in helping the family, and whose religion exposes another element of Vergérus' hypocrisy. Jonathan Slinger gets the best comic moments as the children's uncle Gustav Adolf, a philandering restauranteur whose short temper and fiercely protective streak combine to provide one of the most memorable scenes, while Gloria Obianyo as Isak's nephew, who's so intelligent it's indistinguishable from madness, provides the climax of the play's move towards a dreamlike sort of philosophising. Webster has managed to pull together the disparate ideas of a story that started life as a five-hour TV series, into a coherent and hypnotic evening that takes in a wealth of metaphysical ideas while still providing a simple fairytale of good versus evil at heart.

Fanny and Alexander by Stephen Beresford, based on the film by Ingmar Bergman, is booking until the 14th of April at the Old Vic.