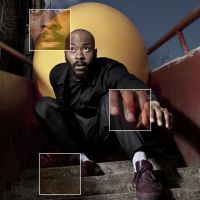 The only black man on the night bus - describing himself as the virus among blood cells - gets into a quick scuffle with a drunk, and finds the situation escalating until he's on the front of the local papers, being sought as Public Enemy Number One. Arinzé "chest day is his favourite day" Kene's Misty is storytelling theatre crossed with performance art and music gig, but it's also a postmodern deconstruction of itself: Backed by two musicians, Kene performs his own play, following his central character on a journey around a London he's starting not to recognise, written in a mix of poetry, rap and song. It's a familiar story of black Londoners facing discrimination and fighting against the disadvantages they grew up with, and the question is, is it too familiar? Kene bursts the bubble of the atmosphere he's created, stepping back from performer to writer and questioning why he's telling this particular story.

It begins when musicians Shiloh Coke and Adrian McLeod take on the roles of his friends; exhausted with a new baby and with little patience for his artistic dilemma, they accuse him of being an Uncle Tom. 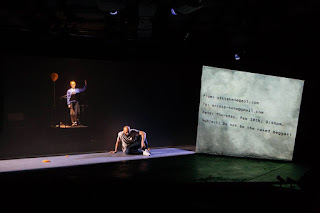 The argument is that a bleak story filled with crime and prejudice is the default black story that gets told (Coke's character would like to see a movie where someone who looks like her gets a clichéd romantic bike-ride montage) and reinforces stereotypes in the process. Kene counters that even if this experience isn't his story it's still someone's story and worth telling, but he can't shake the thought that they might be right and the play becomes about this conflict. In the second act things get even more tangled as he realises that his virus metaphor is flawed, and that his story is more about gentrification than he'd originally realised. 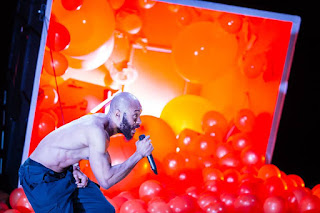 As much about the experience of being a writer as it is about the black experience, embracing the incoherent way creative projects are put together is, paradoxically, what makes Misty coherent. Its real secret lies in the fact that while Kene takes his subject seriously the same can't be said of himself, often making himself the punchline of his own joke in a show that's as funny as it is atmospheric. Omar Elerian's production keeps coming back to the visual theme of orange balloons, used to increasingly surreal effect with a twist as to their significance at the end (I also liked the gag of the baby being played by a greetings card that cries when you open it.) It's an impressive night for Kene both as writer and performer, and if it ends with more questions than it started with then that's really the point.

Misty by Arinzé Kene is booking until the 21st of April at the Bush Theatre.