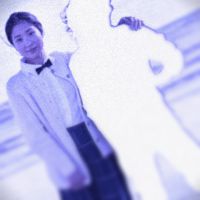 A commonplace scene of teenage sisters squabbling quickly turns into a thriller when Hanako (Kirsty Rider) is dared to go for a late-night walk on the beach in the middle of a storm and disappears. She's assumed to have been washed away by a wave but her sister Reiko (Kae Alexander) insists she saw three men take her away. The investigation is fruitless and eventually abandoned, but a few years later the girls' friend Tetsuo (Leo Wan,) trying to clear his own name of suspicion in her disappearance, uncovers a wild conspiracy theory that might just hold the answer: Hanako's disappearance in 1979 might have been the first in a series of abductions of young Japanese men and women by North Korean forces. Francis Turnly's The Great Wave takes us from 1979 to 2003 in Japan and North Korea, which is indeed where Hanako is.

Spending her first couple of years there in a cell, she's forced to teach Jung Sun (Tuyen Do) how to pass for Japanese so she can spy on neighbouring countries. 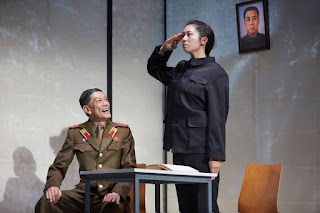 Initially promised she'd eventually be sent home, Hanako is told she knows too much to ever be released. Given a new identity as one of the Undesirable class, she's married off and starts a family. Turnly's play comes at a time when North Korea is once again in the news so the situation Reiko and her mother Etsuko (Rosalind Chao) encounter strikes a contemporary chord: The Foreign Office official (David Yip) they deal with doesn't pursue their case, not because he doesn't believe them but because he knows they're right, and actually pursuing the issue risks inflaming tensions with a volatile state. 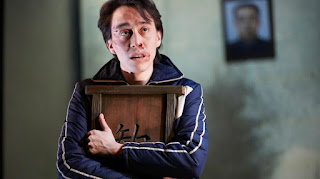 The production at the Dorfman is co-produced by the Tricycle, whose artistic director Indhu Rubasingham doesn't often disappoint, and who's come up with another hit here. Although we know from the first few scenes where Hanako is, Rubasingham really ramps up the tension as her family back in Japan start to put the pieces together. The design helps a lot, Tom Piper's set spinning and floating around the stage as Luke Halls' projection work throws ominous storms and waves onto the white walls. 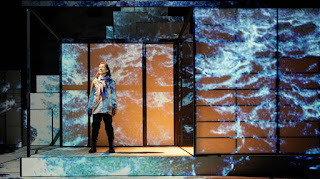 Turnly paints a brutal picture of North Korea while being sympathetic to the people who've grown up in its regime; Vincent Lai gives a strong performance as Kum-Chol, Hanako's husband whose childhood in an internment camp has scarred him in numerous ways, while there's something of a gut-punch to the audience's realisation that we know more about Jung Sun's fate than her father, the nameless Official (Kwong Loke) who volunteered her as a spy and terrorist. 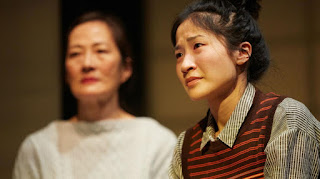 Alexander is steely as Reiko, giving up on opportunities to live her life as she gets older and her lost sister remains her main focus, but Rider provides the heart of the play as Hanako learns how to survive in her new home and new identity. A story that would seem outlandish if it didn't have its roots in true events, The Great Wave aims to tell both an intimate family story and an international political thriller, succeeding on both counts.

The Great Wave by Francis Turnly is booking until the 14th of April at the National Theatre's Dorfman.