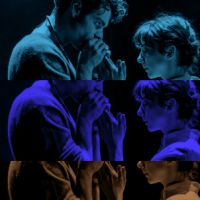 I’ve only seen one show directed by Rebecca Frecknall before, a production of the obscure Tennessee Williams play Summer and Smoke at Southwark Playhouse in 2012. Well either Frecknall herself or Rupert Goold must have thought she had unfinished business with it, as she now makes her Almeida debut with… a production of the obscure Tennessee Williams play Summer and Smoke. In a small Mississippi town early in the 20th century, Alma Winemiller (Future Dame Patsy Ferran) is the local minister’s daughter, timid, bookish and prone to panic attacks, with a slightly affected accent – which she puts down to her father having spent time in England, but most of the town sees as further evidence that she’s pretentious. She’s been quietly besotted with her neighbour, the doctor’s son John Buchanan (Matthew Needham) since high school and, after some time away studying medicine, John has returned for the summer.

At the Fourth of July fireworks he picks up where he left off at school, flirting with Alma by teasing her, and he reignites an old passion in her that’s complicated by the fact that they’re adults now, and he’s already acquired a bad reputation at odds with her position in the town. 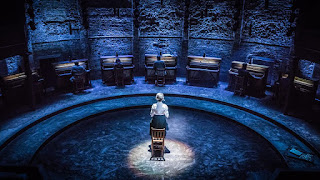 Frecknall’s production is stripped back, Tom Scutt’s design putting its workings out in the open in a pit surrounded by old upright pianos on which the rest of the cast play Angus MacRae’s music; they also play discordant notes and pull at the piano strings to create the rest of the effects in Carolyn Downing’s sound design. That supporting cast is strong, with Forbes Masson (whose singing voice is… not what I would have guessed his singing voice to be) doubling as both the leads’ fathers, Anjana Vasan playing various romantic rivals for John’s affection, and Nancy Crane as Alma’s mother, whose mental disintegration provides a clue to her daughter’s own mental state; but this could almost be a two-person show between its leads. 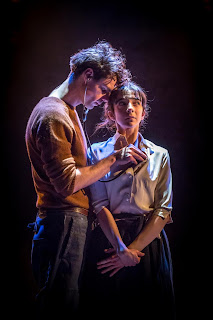 Every time I see Ferran on stage she fully justifies her quick rise from scene-stealing supporting player to leading lady, and never more so than here. She’s immediately relatable even in Alma’s oddness, and is hard to take your eyes off – she seems to be doing so much in her performance that there’s always some other little detail, especially physically, to pick up on; like the way she twists her feet and contorts her whole body into Alma’s mental discomfort. Needham has the difficult job of trying to match her energy and what’s striking about the casting is the chemistry the two build up – Ferran might be the undoubted MVP but it’s the scenes between the two of them alone together that are almost literally breathtaking, sucking you completely into their story. 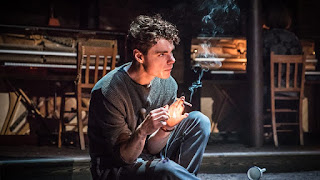 In this production, Summer and Smoke is the tragedy of getting what you wish for: John wants Alma to discover her physical, sexual side, Alma wants John to discover his spiritual side. Both of these things happen, but the latter especially in a way very different than planned, that makes their relationship just as impossible as it ever was. I almost found it hard to watch by the end as Ferran crumbles into a thousand tiny pieces, and I could hear loud sobbing elsewhere in the audience. 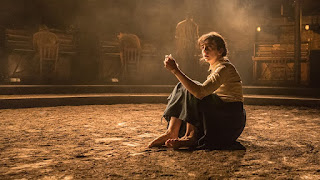 The staging allows for one last simple coup, as Ferran is left alone except for Seb Carrington, who until that point has only been there to play the piano, but now joins her as a new character for the final scene, and it’s an ending that’s more ambiguous now than it was probably intended to be (much like John’s relationship with Vasan’s Nellie carries paedophilic overtones that are unlikely to have seemed that unusual in the setting.) Alma’s story ends in a tragic fall from grace which now can easily be interpreted in a more empowering way, and along with the rest of Frecknall’s production makes a serious case for Summer and Smoke to be dug out of the obscurity it’s currently in. This is an outstanding evening, its drama frequently punctuated by humour, and almost as heartbreaking as Ferran’s performance is the fact that all the remaining performances I could conceivably make are sold out, as I was barely half an hour into the show before wishing I could see it again.

Summer and Smoke by Tennessee Williams is booking until the 7th of April at the Almeida Theatre (returns and rush tickets only.)