Theatre review: A Passage to India 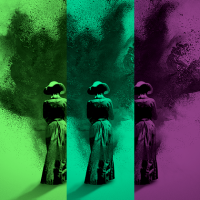 simple8’s first show on the Park Theatre’s main stage was a bit of a disappointment, but for their second visit Simon Dormandy has struck more fertile ground with his adaptation of E.M. Forster’s A Passage to India. The story’s opening statement “one cannot be friends with the English” is challenged by Asif Khan’s Dr. Aziz, whose job puts him in the middle of two factions of the English in Chandrapur during the height of the Raj, represented by two young men who’ve embraced very different approaches to India and its people: Edward Killingback (Yeah!) Them Motherfuckers Don’t Know How To Act (Yeah!) plays Ronny, the new Magistrate who’s quickly embraced the prevailing attitude that India is there to be governed, its people there to serve. Schoolteacher Cyril Fielding (Richard Goulding) is another recent arrival, who firmly believes India is its people and wants to get to know them.

The perceived wisdom is that this is an attitude that’ll get worn down the longer he stays there, and the arrival of two women connected to the new Magistrate puts pressure on everyone’s attempts to build bridges.

Adela (Phoebe Price) is considering Ronny’s proposal of marriage, and has travelled with his mother to visit him, and see what her future home will be like if she accepts. Mrs Moore (Liz Crowther) meets Aziz while visiting a mosque and quickly strikes up a friendship with him. They start to meet socially, but when they get lost in a local network of caves Adela accuses Aziz of sexually assaulting her in the dark. The ensuing trial allows the old guard to see their prejudices confirmed, the mix between English and Indian only bringing danger – the trouble is Adela is starting to realise that her memory of events is unreliable.

The caves have an unusual echo pattern which it’s suggested might have made her dizzy and confused, and Dormandy and Sebastian Armesto’s production uses this as a cue for the play’s soundscape, an unsettling repetitive chant by the cast which mixes with Kuljit Bhamra’s original music. In keeping with simple8’s minimalist style a lot of the visuals are created by actors moving sticks, boxes and lengths of cloth around, including an elephant that serves both as spectacle and punchline. Armesto still hasn’t quite figured out how to stage his big physical tableaux on a thrust, but you don’t get the feeling you’re missing out on too much sitting at the sides. This is a large cast creating a lot of the necessary atmosphere, but Khan still has the most work to do as the doctor is hardened against the English by his experience, without losing the essence of his open-minded nature and friendship with Fielding.

Crowther is also one of the standouts, her character’s one that could easily be too transparently a mouthpiece for the author’s point of view but Crowther has a touch of mischief and genuine enthusiasm that makes you believe in her friendship with Aziz. Forster’s frustration with his countrymen’s racism is palpable but he also acknowledges that the situation in India was already complicated by religion; the Hindu scholar Godbole’s (Ranjit Krishnamma) interminable parables mostly make him a comic figure, but Aziz eventually takes a job at a Hindu retreat – in reality the differences between Hindus and Muslims resulted in the extreme solution of Partition, but Forster’s angry but essentially optimistic story imagines another way. simple8’s version of the story is atmospheric storytelling that’s easy to get sucked into and care about.

A Passage to India by Simon Dormandy, based on the novel by E.M. Forster, is booking until the 24th of March at Park Theatre 200.