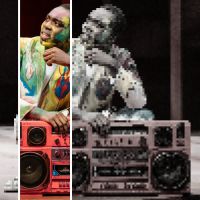 Hamlet is a play so popular and frequently produced that I've seen it more times than any other, so it's not often I feel the need to revisit a particular production. Simon Godwin's 2016 Stratford version was one I did want to see again, and I was far from the only person to be disappointed and annoyed when it was the only show in that RSC season not to transfer to London. The reason given was that the cast was unavailable, but as many of them were in other shows in the season, including Paapa Essiedu in the lead, there would probably only have been the need for a handful of roles to be recast. Well that omission has finally been rectified, as Essiedu returns to lead a tour of this relocation of mediaeval Denmark to modern Africa, with some of the original cast also joining him; more recastings have had to be made than would probably be the case if it had transferred straight away, but it's not in the least to the detriment of the production.

You can read my original review here, and I'm pleased to say it's lost nothing in the interim, still pulsing with energy from its paint-splattered visuals and drum-dominated soundtrack. 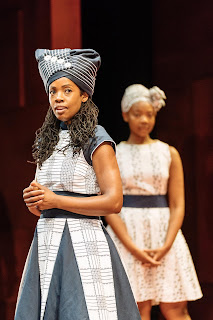 Lorna Brown is a softer Gertrude than Tanya Moodie's was, and it seems to have softened Clarence Smith's Claudius as well: He's become a much more ambiguous figure, and while his rule still has the look of a military dictatorship he now seems more conflicted about the bloody way he achieved it. I don't remember when I last saw a Claudius more genuinely protective of Ophelia (Mimi Ndiweni) and more stricken by her breakdown. Joseph Mydell keeps Polonius well within the lovable interpretation of the character despite the inclusion of the Reynaldo scene. 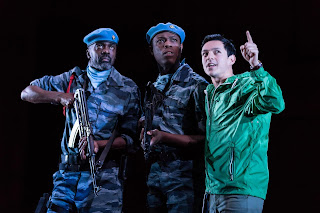 James Cooney has been promoted to Horatio, giving him just subtle indications of possibly being in love with Hamlet, while Romayne Andrews has been bumped up in turn from Osric to Rosencrantz, now the more palpably ridiculous of the famous pair, while Eleanor Wyld's Guildenstern now has just the slightest hint of being Hamlet's ex, like in last year's Robert Icke version. (I did realise, though, that I will now never not be able to hear Andrew Scott's reading of "Since he went into France, I have been in continual practice" when that lines comes along.) 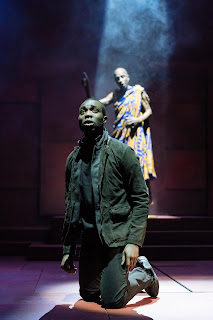 As I say, a lot of Hamlets come and go, but 2016 and 2017 were notable for the fact that each delivered a production that was outstanding in completely different ways. I hope Michelle Terry's new ensemble can deliver a hat-trick but in the meantime Godwin and Essiedu's return to their version sees it still every bit as vibrant, funny and moving as it was, and it's only right that the rest of the country's had a chance to see it.

(PS: Hackney Empire is something of a journey for me so this was my first time there and it'll take something as major as this to get me there again, but I have to give a shout-out to the staff: As soon as we walked through the door an usher spotted Vanessa's walking stick and whisked us off to the disabled access lift, which she says isn't a level of courtesy she gets often.)

Hamlet by William Shakespeare is booking until the 31st of March at Hackney Empire; then continuing on tour to Washington D.C.